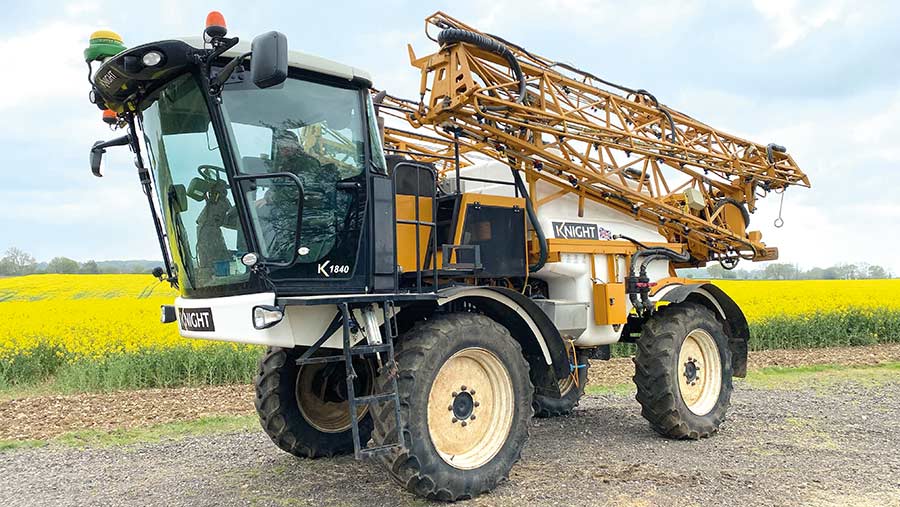 A 2013-built Knight 1840, which we bought to replace a Bateman RB25 with 24m boom that was with us for seven years. It’s now in its third season here.

The main motivation for the switch was to get a 30m boom, but while I was hunting around for something that would fit the bill, the 36m Knight came up for sale just down the road in St Albans. It had 3,000 hours on the clock and cost £82,000. The Bateman sold for £42,000 in a heartbeat.

See also: What to look for when buying and fitting a tractor dashcam

Going to 36m felt like a bit of a gamble at the time. I was worried about throwing granular fertiliser that sort of distance, though the farm it came from was also applying fertiliser with the same Amazone ZA-M Ultra spreader as us, which gave me a bit of confidence that it would work out.

To avoid any problems with granular fertiliser I make sure I buy decent prills and tray test every product. But the extra spraying capacity has also allowed us to switch a third of our acreage to liquid fert, which means we can be a bit pickier about the days we go spreading. It’s definitely the way to go – even if it’s logistically daunting – and I love the fact that it turns up the day after ordering and I don’t have to be in the yard to help unload it. 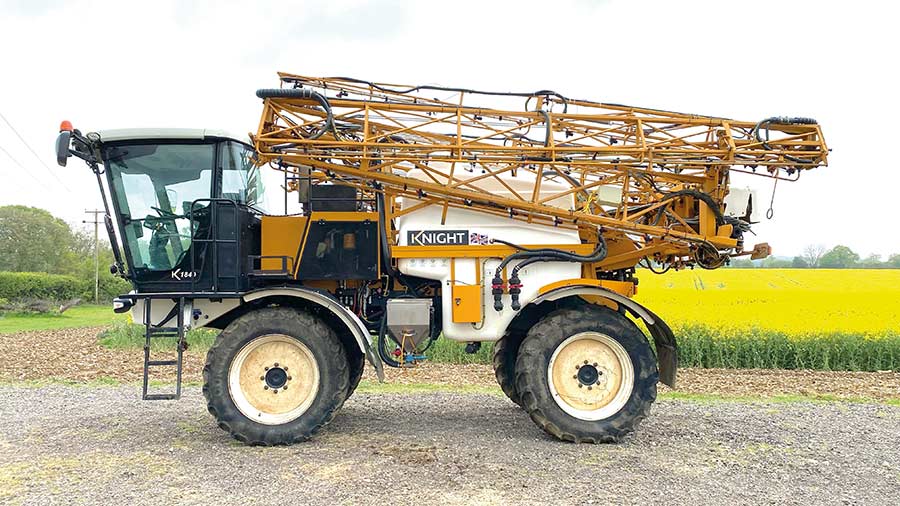 The advantage of Knight’s 36m boom is that I can switch it back to 30m or 24m for contract work. And there’s still a break-back when it’s folded to 24m, which I’m told is pretty rare.

I ran it at that width for the first year as the farm had already been drilled, but 90% of my work is now at 36m. This makes a huge difference to output and, although there’s probably not much of a yield benefit, covering the ground so quickly definitely makes me feel good.

It was second-hand but it still felt like a 20-year upgrade in technology and the move to the Claas cab is heavenly. Working air-conditioning is a particular highlight.

I transferred my John Deere dome and 2630 screen across from the Bateman, which I use purely for auto-steer on pre-em sprays. Last year I dabbled with drilling without tramlines, so the GPS is essential.

The sprayer also came with a Trimble dome and Muller screen that controls the 16-section auto shut-off system, which is more than accurate enough – I’ve never seen an obvious miss or overlap.

Automatic boom levelling runs through the Muller screen as well, and is controlled by two sensors. These work fine in a thick crop, but aren’t great in beans or anything gappy, as the boom can be too quick to drop and too slow to rise.

I certainly wouldn’t want to run on anything narrower, particularly when it’s full of lead-heavy fertiliser, and I’m happy to spread the weight over wider tyres when I’ve got a 36m boom and fewer tramlines.

The flinty soil slices and dices them anyway – to the point that I tend to cut them out rather than wear them out. Wet springs are the worst, as the tyres sink in a bit and the flints nibble at the sidewalls.

Fortunately, even if the going is soft, ground clearance is pretty good. There’s a smooth belly plate under the cab and the fuel tank is neatly designed to avoid knocking around a healthy crop of oilseed rape late in the season. 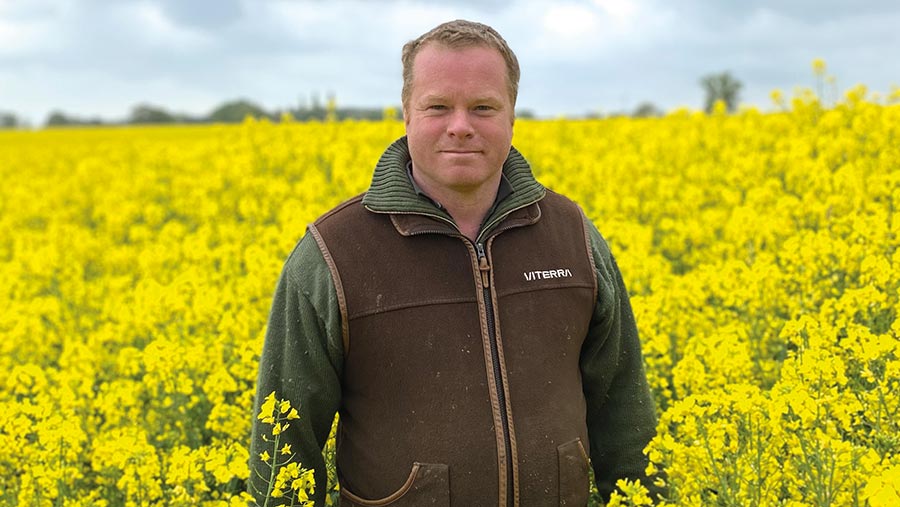 It has been good – the engine has plenty of power to handle our hills and the increase in output and ability to apply liquid fertiliser quickly has been a complete revelation.

However, I’m a bit concerned about fertiliser fatigue in the medium-to-long term and the hydraulic couplings into the wheel motors are already starting to fur. Hopefully it’ll last for another four or five years.

It has suffered from a few niggles lately, which is no surprise given it is eight years old. A couple of months ago I had to get someone from Olivers, the dealer that originally sold it, to replace the thermostat. And, not long before that, I found the main boom pivot bolts had worn out. It was a horrible job because they were completely seized, so the lugs had to be hacked off and replaced.

I also had a problem with the little circuit board that controls the opening and closing of the main inlet shutter, which was preventing it from filling, building pressure or emptying.

Aside from that, it has just been routine maintenance. It’s generally simple – the only thing I’d change is the position of the Ramsay pressure control valve, as replacing it or the diaphragms/seals inside is a wicked job. Doing it requires half of the sprayer’s backend to be dissembled, which is a killer. Knight recommends it is done every 500 hours, but I tend to stick with a 250-hour interval as I don’t want it failing when it’s full of chemical.

It has got a good wash-out system though, and the tank hasn’t got any nooks and crannies where residue might otherwise collect. 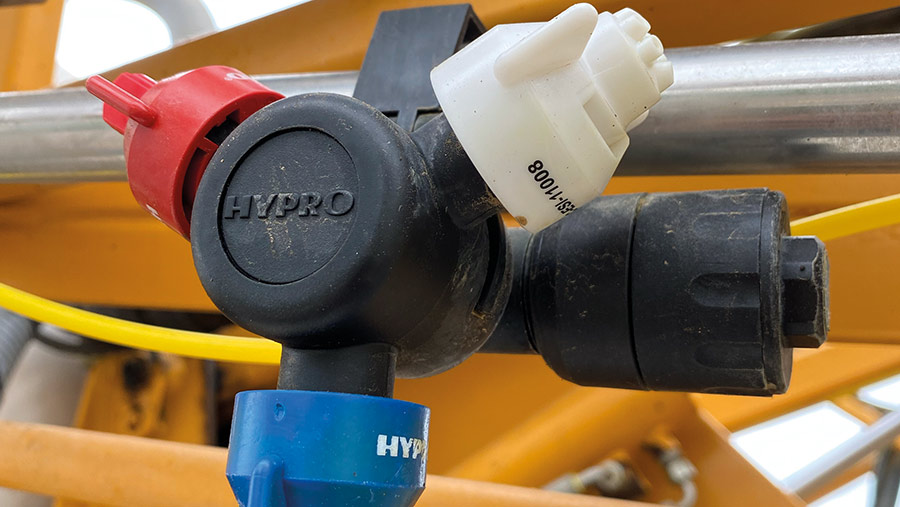 I run Hypro nozzles on the triple bodies and rarely venture over 12kph, as I find it creates a bit of a vortex and I can see the chemical sitting above the crop.

My day-to-day fungicide applications are at 100 litres/ha through Lechler blue 03 air induction nozzles.

Pre-ems tend to be at 200 litres/ha and for those I use red 04s with a forward/backward spray pattern. I’ve varied between 150 and 220 litres/ha over the years and haven’t noticed any visible difference in the crop, but I feel like I’m committing a crime if I duck under the magic 200 litres/ha.

The third cap on the body is a white umbrella-style FS 08 for liquid fertiliser. They’re brilliant and produce big droplets that can eat 20kph winds – I’ve done 260 litres/ha with them, and I reckon they’d easily go to 300 litres/ha if necessary.

I used to be obsessed with Defy nozzles, but I eventually concluded that they’re horrendously drifty. I’ve still got a set of 3Ds that I occasionally put on in the autumn as I like the alternating forward/backward pattern on lumpy seed-beds, which we sometimes have as we’ve gradually pushed the drilling date back.

If I could change one thing it would be to add some sort of turn compensation system. The outer section of the 36m boom turns at a hell of a speed when cornering and I can always see patches of brome starting to come through where an autumn pre-em has gone on too thinly. 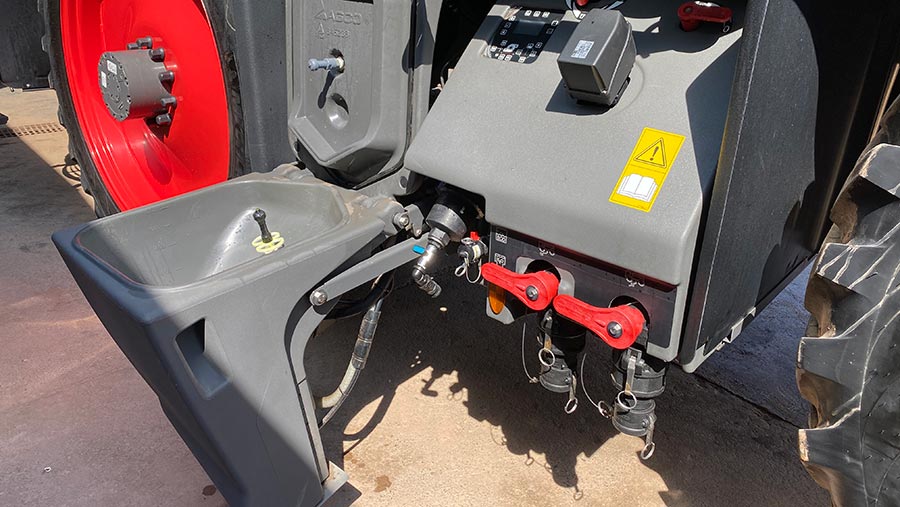 We built a bunded pad for the sprayer in 2013, then covered it with a lean-to extension off the side of the workshop in 2020. It lives there most of the year, until there’s a serious risk of frost.

We’ve got two yards that are located centrally across our blocks of land, and each has a 10,000-litre water tank. They keep me going for 80% of the time and, for the rest, we’ve got an 8,000-litre Enduramaxx tank that fits to lugs on the floor of the grain trailer. If I leave the yard with a full tank, then I have enough water for 120ha.

Filling time for the sprayer tends to be about 15 minutes unless I’ve got a hideous T1 mix of plant growth regulators, fungicides and trace elements – in which case it can fill as slowly as it likes.