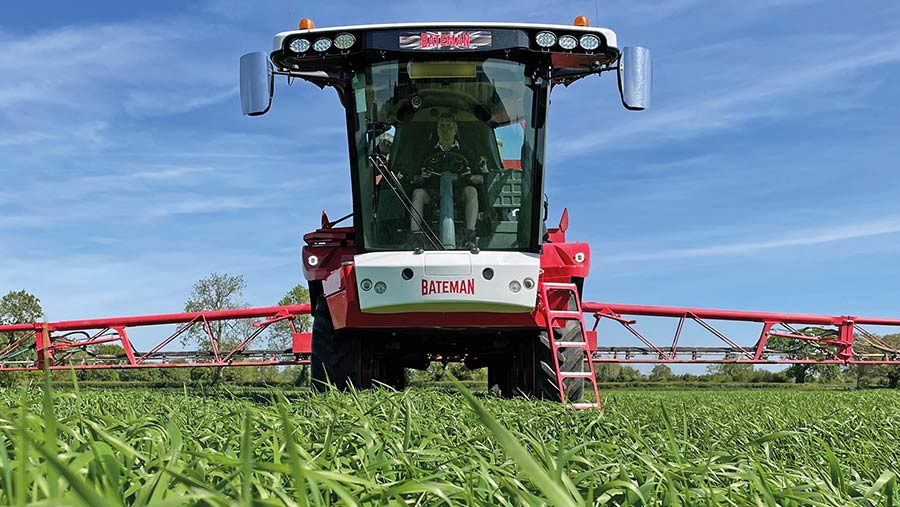 Jonathan Legg gives us the lowdown on his Bateman RB35 fitted with a 30m variable geometry boom and running Topcon RTK guidance.

He has worked at Ashton Farms, near Trowbridge, for the past five-and-a-half years, which is run by Farmers Weekly’s 2011 Contractor of the Year, Chris Awdry.

Each has seen a significant step up in performance and the machine I’ve got now is particularly impressive.

We’re currently running three RB35s: one 2021 machine that mainly sprays the home farm, my machine and a 2015 model, both of which spend most of their time doing contract spraying.

For the size of machine and boom, it’s a fairly standard specification. Like all the sprayers here, it’s got a 30m VG boom, which does a good job of following the ground.

The levelling system is Norac rather than the Bateman BBL system that’s fitted on the newer model we’ve got.

Most of the time the Norac system is more than adequate, but occasionally it struggles to keep up if I’m driving across particularly rough ground.

One problem with having a 30m boom is that most of my contract spraying is at 24m. Although the boom folds back fairly neatly to 24m, it means I lose the break-backs. As a result, I have to be very careful to make sure I don’t clip the tips on anything.

The sprayer is set up to run 1m sections with a Topcon spray controller and RTK guidance, which gives me plenty of accuracy and minimal over-spraying. 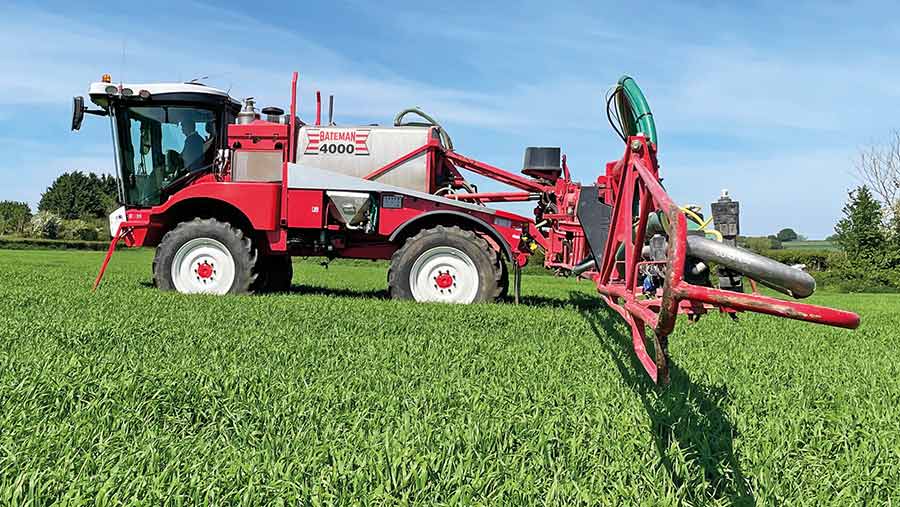 Batemans tend to be specced with Ag Leader screens, but we’re trying to reduce the number of different GPS systems on the farm, so all our sprayers are fitted with the Topcon setup.

The pump is a six-cylinder 400-litre/min unit that’s an upgrade from the standard four-cylinder and it has got twin nozzle holders with a single outlet and a triple.

If I was being picky, I’d like to be able to change nozzles from the cab, so I don’t have to run along the boom turning them all by hand. As for the running gear, it’s got the optional four-speed wheel motors, which means I get plenty of speed variation.

Running it in four on the road means I can travel as fast as I want and two gives a good working range in the field. I only ever need to drop to one on very steep hills.

It’s also specced with hydraulic track width adjustment, which is a godsend when switching from cereals to maize. You just have to remember to change the width before filling as it’s a real performance to push them out with weight on the rear axle.

Thankfully, it also has an auto-lube system, which does everything apart from the boom. This makes a massive difference to maintenance and saves me loads of time.

The only other upgrades were the LED boom lights and an extra pair of cab work lights. There are now six at the rear and six at the front, which means I’m lit up like a Christmas tree at night.

I also bought a set of mirror guards to protect them when I’m going down narrow lanes. One option I wish it did have is a decent cup holder. I love my coffee and at the moment the only place I can put my cup is wedged between the passenger seat and the fridge.

Performance has been good and the improvements over the older model mean I’m pretty thrilled with it. The cab is a big step up in comfort, with much more space, improved visibility and better ventilation.

On the old model, the blower jets blew in your face and you couldn’t stay cool if you directed them away from you. 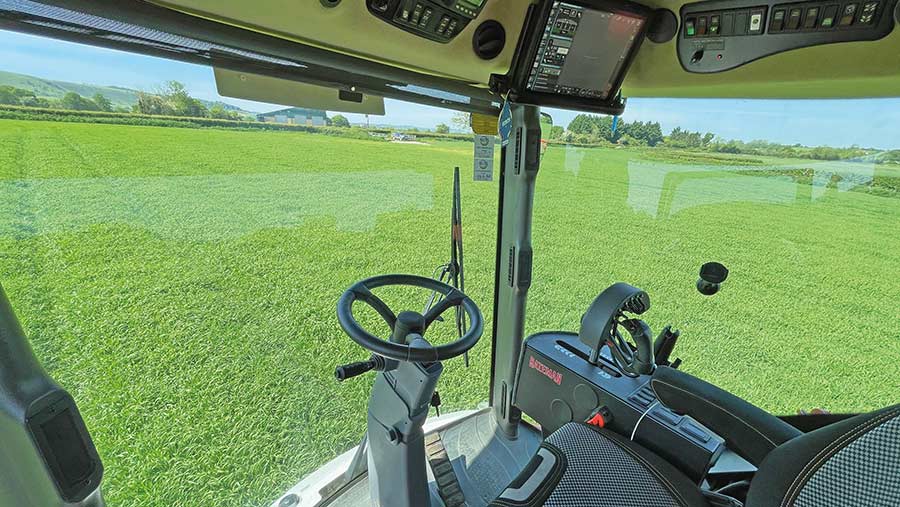 On this model, they come from all angles and have plenty of power, so I can get the temperature just the way I want. The seat is air conditioned, too, which also helps me stay comfortable. The only slight moan is that the engine is so close to the cab and some of the heat does radiate in.

The hydraulic suspension is also much smoother than before, which I really notice on ploughed ground. The lad that drives the older model borrowed mine for a bit to spray some furrows and I had a job to get it back off him.

All of this, combined with the RTK autosteer, means I can work a longer day than I did on the older machine and feel a lot fresher and sharper at the end of it. It’s now worked about 1,800 hours and I haven’t had many significant mechanical problems. 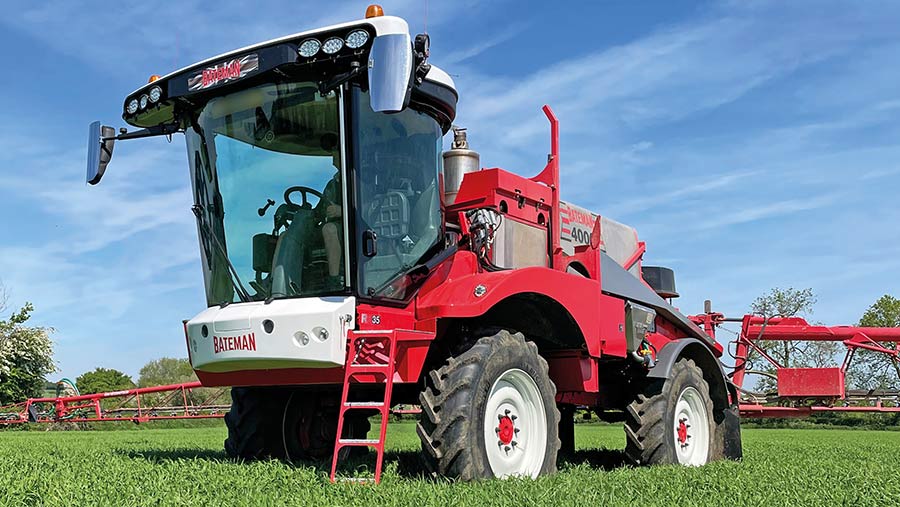 The worst was fuel troubles last year, as the John Deere engine didn’t get on with the poor-quality diesel that was going around – at its worst, I was changing the filters every time I filled up the tank.

On a couple of occasions, I’ve had problems with the boom folding, but these were minor gremlins and Bateman has always managed to keep me going.

I can just phone up and, nine times out of 10, they’ll talk me through the problem. Even if they can’t, they’ll come out and fix it quickly.

It’s the same with LH Agro, which looks after the Topcon screen ­– always there to help if I need it. The larger cab is great and the curved door gives great visibility, but it can be difficult to shut and the hinges have sagged slightly due to the weight.

I have been able to adjust them though, so the door is back where it should be now.

I’ve also got a set of 035 Defy nozzles, which I use for grassweed control and for spraying maize. We’ve also been trialling some new Teejet 90% drift-reducing nozzles on pre-ems and they seem to have been doing a good job. 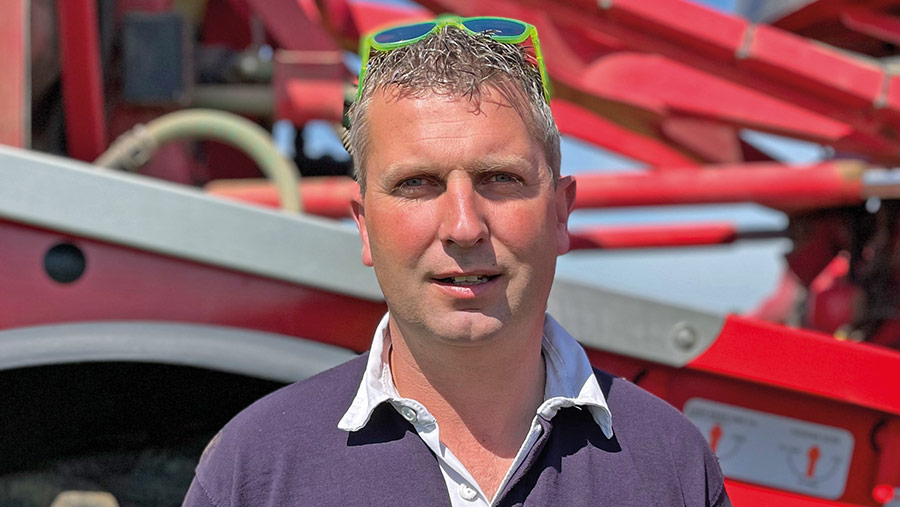 I nearly always fill at customers’ yards and, thankfully, most of them have decent stores, water tanks and areas for me to park up.

One thing I would like to add to my setup is an in-line flow meter to improve filling accuracy. At the moment I just fill according to the tank float and there’s a little too much margin for error when I’m hopping back and forth from the taps to see how much I’ve got in.