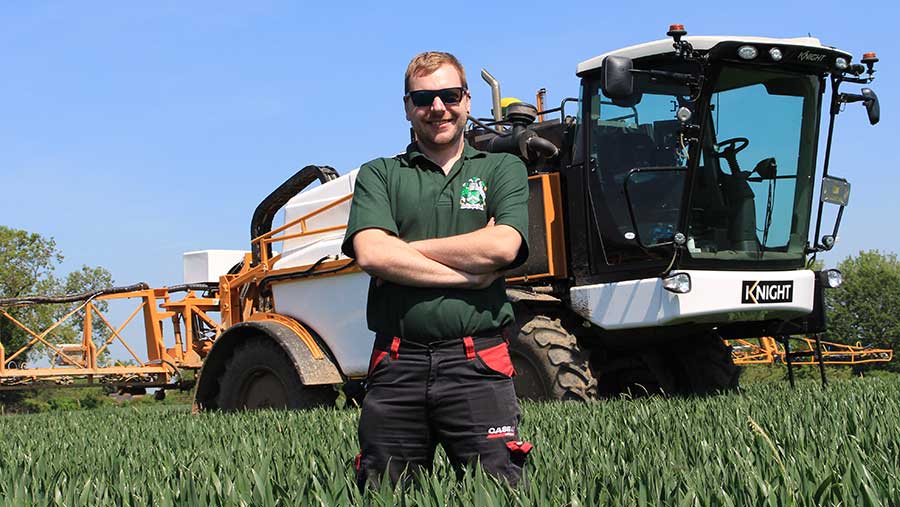 Tom Ingram has been the sprayer operator at Sutton Cheney Farms Partnership for just over a year and is the sole driver of the company’s 2019 self-propelled Knight 1840.

It’s a self-propelled Knight 1840 that came new to the farm in March 2019. It replaced a 2001 Bateman RB16 that was starting to hold us back in terms of output, reliability and a general lack of technology – it had no guidance and the booms were manually levelled.

Several brands were in the running, but in the end we only had the Knight and a John Deere out on demo. The Knight won as it was considerably lighter than the Deere and a good bit cheaper, too. 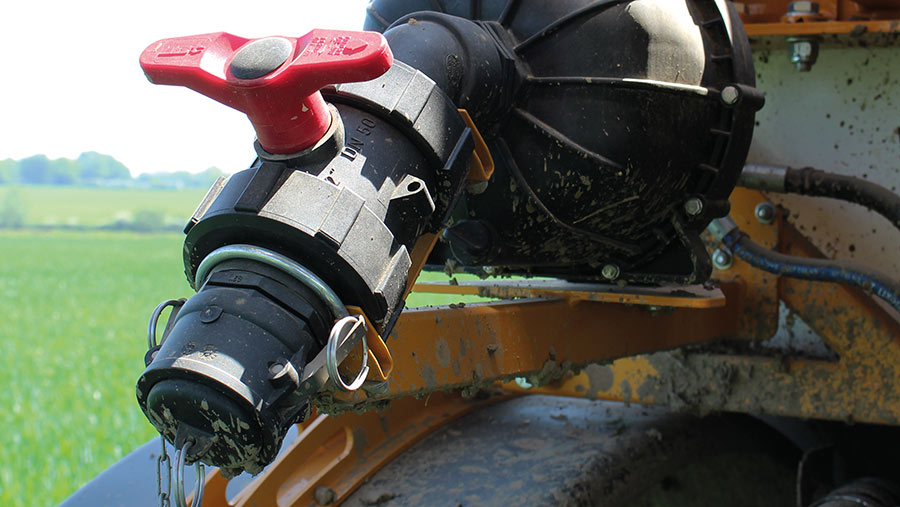 It had a few paid-for extras but, as we were upgrading from such an old machine, the basic specification was still a vast improvement on what went before it.

The most notable optional add-on was a 1,000 litre/min centrifugal fast-fill pump, which we got in preparation for a switch to liquid fertiliser that will help reduce the waste associated with bagged products. We aren’t quite there yet, but moving to a new yard next year will bring a purpose-built spray store with a three-tank liquid fertiliser setup.

I was tasked with getting the tanks sorted and opted for Yara, despite dealing with Omex in a previous job. I was advised to have two tanks but decided to add a third, just to give us extra capacity. Hopefully, that will allow us to buy products at a cheaper price and not be hamstrung by having to empty a tank before delivery. 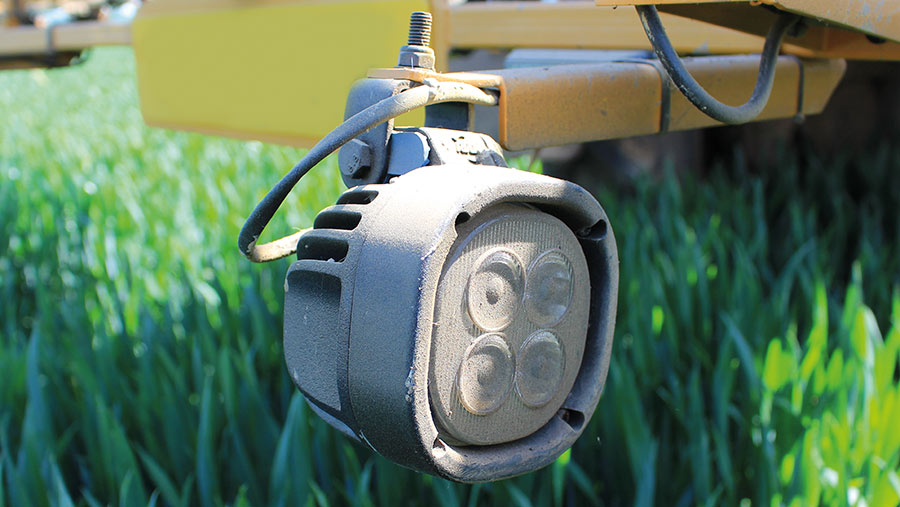 The other extra I particularly like is the blue boom lights for night work, which I can honestly say are phenomenal. I don’t tend to do much work after dark, but I gave them a good test during the hot spring of last year and they shone down the full boom length and lit up every nozzle clearly.

One thing we may look at in the future is pulse-width modulation. I have done a fair bit of reading into it and I can see the benefits, but I’m yet to be truly convinced it can justify the price tag. I always square off any internal field corners, so the inside of the boom is rarely standing still – something I’m very careful about.

It’s been a solid machine over the 700 hours it has clocked so far.

A John Deere 4640 screen in the cab displays the Greenstar SF1 guidance and information from the Muller spray unit via an Isobus connection. I’ve got a second small display to show the engine and transmission details.

I tend to calculate and input my fill volume on the Deere screen before getting out of the cab. One slight gripe is that the pump can only be turned on and off from the same point, so I can’t swap between using the cab rocker switch and controls by the hopper.

In the field, the sprayer has three gears that allow me to keep the engine down at just 1,200rpm. Selecting a particular mode – uphill, downhill or flat – basically changes which pair of wheel motors receive the power. I haven’t spotted much difference between the first two and tend to run in uphill, which drives the front motors to pull the sprayer along.

When I first started with the sprayer, I found my nozzles were constantly blocking, even after fully washing out the tank and boom several times. It was becoming a bit of an issue until I noticed that the plastic saddle tank only had a drainage hole on one side, which meant that the other part of the tank never emptied below the ridge.

With 120 hours’ worth of sediment built up, it tended to swirl around the mix when the tank was full and filter down the lines. Knight installed a second drain in the other side, and it cured the problem instantly.

One other small addition was a diverter for the pump, as there was no way to rinse the booms with any other liquid apart from the contents of the main tank. This made it impossible to wash the booms out when I was rained off and part loaded.

The positive is that Knight’s backup has been great. When I was spraying at night last year, I had a breakdown at 3am, sent a message to the fitter so he could reply when he woke up, but he responded in minutes offering a solution and was on-farm for 9am the next morning. 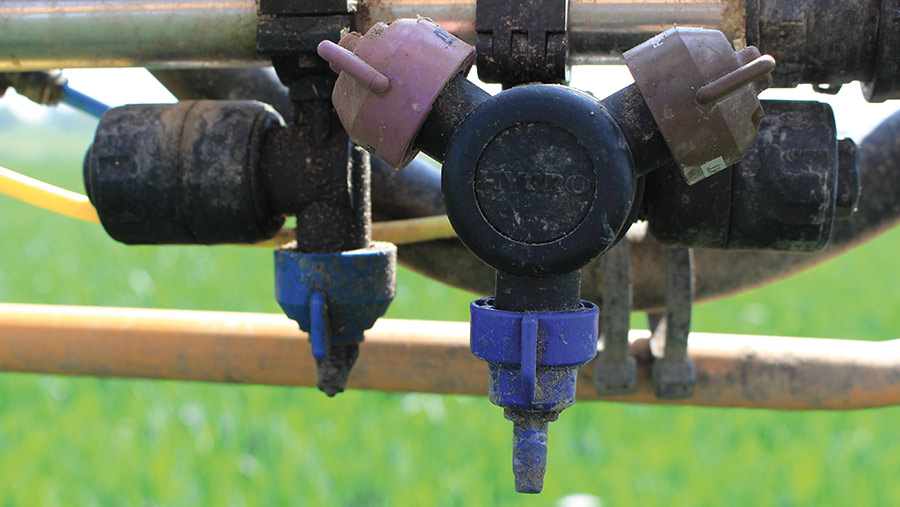 I spray at 100 litres/ha for all applications. The triple nozzle bodies carry Billericay Bubble Jet 03s, which I use most of the time as the low-drift properties cover a wide range of sprays, including glyphosate. I also have Defy 3D 03 for pre-emergence sprays, T0 herbicides and ear washes later in the season.

As we are on the verge of moving yards, our current store is a little outdated, but I keep it tidy and have clear records of stock levels on a large white board. That way, if I’m not around then our agronomist can see exactly what he needs to order without having excess chemical left over. We’re also looking into IBCs for glyphosate to reduce how many plastic cans are sent for recycling.

Once we move to liquid fertiliser, we plan to invest in a bowser to improve output. We are getting prices, but they’re looking pretty expensive. For the cost of a new bowser, we could afford about four slide-in skid units for our grain trailer, so there is more research to do.

We are slowly moving to the paperless Gatekeeper system, too. I have an iPad that I use to download my recommendations in the office and then upload them once I’m done. We also use John Deere’s My Operations app to note blocked drains in fields and have recently just recorded every outlet and culvert on the farm, which should prove really helpful in the long run.

I completed my Basis Foundation course over the winter and it has helped me understand why I am getting the sprayer out of the shed, rather than just following an application sheet. I can now spot crop problems early and report them to the agronomist, which should save us money.

❌ No boom rinse with clean water