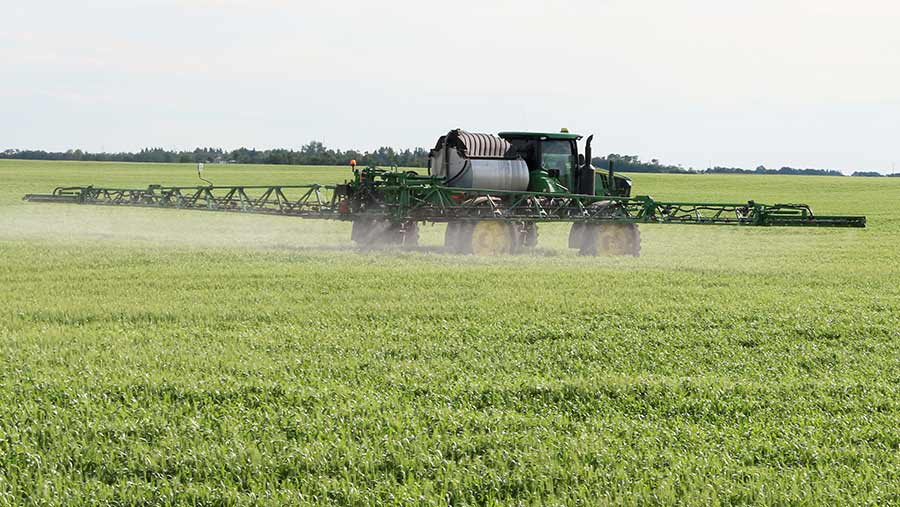 Arable production across the prairies of western Canada might appear to have little in common with that of the UK, but they share one problem: how to increase sprayer productivity while maintaining product efficacy and minimising drift.

Helping to answer that question for Canadian sprayer operators for the past 30 years is independent application expert Tom Wolf, who alongside his colleague Brian Caldwell runs the spray research and training organisation Agrimetrix.

It is the only company in Canada dedicated to application research and gets its message across through face-to-face meetings and events, a website and social media.

Mr Wolf says one of the biggest changes in Canadian application over the past 25 years has been the shift to heavier and faster high-clearance self-propelled machines for better efficiency, which in turn has seen booms run at increasing heights.

With operators regularly travelling at speeds up to 30kph with booms anywhere between 75cm and 125cm off the deck, the risk of spray drift and its associated effects have been brought into focus. 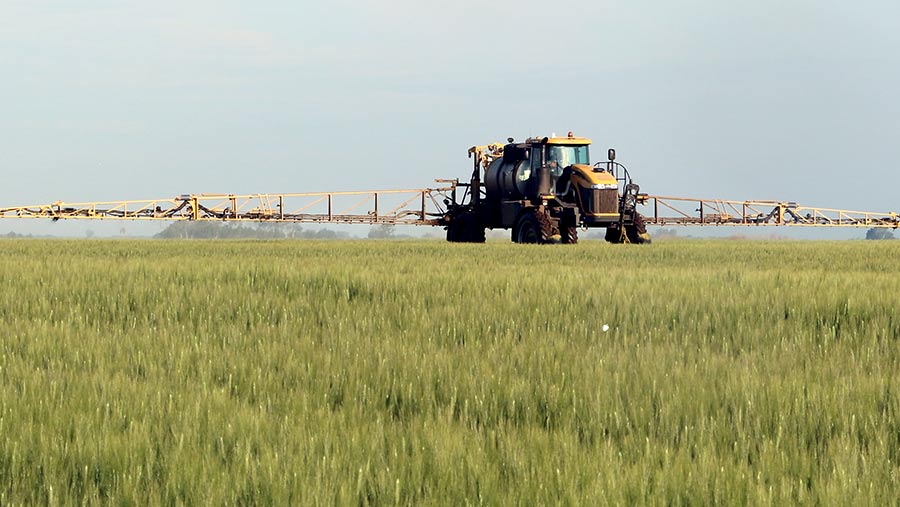 This has been sharpened by increased environmental awareness, the introduction of buffer zones around watercourses and tougher usage restrictions imposed to get products through the regulatory process.

Changing nozzle selection has been the greatest driver against drift, and Mr Wolf says he has not recommended the use of a medium or fine nozzle tip in 15 years.

He says sprayer operators are now highly motivated to minimise the impact of their activity, both to protect the environment and neighbouring properties, and to boost productivity and improve the bottom line.

“It means a widening of the window in which treatment is possible,” Mr Wolf says. “So in other words, low drift tips are an agronomic tool to make an application at the right time [if conditions are marginal]… Timing is everything.”

To help the Canadian industry make a wholesale switch to low-drift tips, Mr Wolf’s research has focused on giving operators the confidence that using low-drift nozzle technology will not necessarily mean a reduction in spray efficacy and crop yield.

A move to low-drift tips is now being discussed in the UK.

The advice is to combine the nozzles with a reduction in forward speed to no more than 12kph, maintaining a 50cm boom height and using a water rate of 200 litres/ha as part of a “low, slow and covered” campaign.

One operator gripe is the reduction in sprayer productivity that these drift-reducing measures can have, but Mr Wolf says growers in Canada have been seeking efficiency gains elsewhere to counteract this.

Using telematics on a John Deere R4045 self-propelled sprayer averaging 450 engine hours a year, Agrimetrix found that just 45% of that time was spent spraying, 22% in transport and a massive 33% idling.

He believes a bowser with a 3in pump that can mix and transfer 4,000 litres of spray solution into the spray tank in about seven minutes is now one of the most powerful productivity tools on Canadian farms, helping to slash that idling time.

“This dramatically increases the area that can be sprayed in one day,” Mr Wolf explains.

“Low, wide and covered is a good idea. We support that and it’s made possible by these external productivity gains.”

Mr Wolf notes the added bonus of reduced depreciation costs, with engine hours often the key component of a machine valuation when trading in or selling.

Despite Canadian operators seemingly cracking the problem of spray drift by the widespread adoption of low drift technology and sensible nozzle choice, it will remain one of the key areas of Agrimetrix’s research.

This is because regulators are increasingly having to re-register older chemistry that may be cause for concern in terms of drift, and successful re-approval is often dependent on the compulsory use of specific nozzles, as seen with the herbicide dicamba.

PWM facilitates precision application practices such as optical spot spraying, and  Mr Wolf says his company is working on how these combined technologies can be best implemented in Canada.

“In addition, we are also currently interested in deposit uniformity of sprays as affected by sprayer travel speed and various associated aerodynamic characteristics,” he says.

“We believe that good uniformity is fundamental to good application results.”

Tom Wolf reports that almost every sprayer operator covering combinable crops in Canada will have three to five different nozzles on each cluster.

He recommends the use of air induction nozzles, such as Hypro’s Guardian AIR, and selecting the appropriate size for each spray activity carried out through the growing season.

These could include pre-drilling burn-off with a glyphosate-based mix at 50 litres/ha, post-emergence herbicides at 90-110 litres/ha and late season sprays at 140-200 litres/ha.

A liquid fertiliser applicator would also be required and Mr Wolf says a coarser or lower-drift version of one of the three Guardian AIR tips is a good idea, allowing operators to keep going when the wind picks up.

“To save a tip where required, I’ll recommend to use a 100 litres/ha nozzle for fungicide or desiccant applications, but at a slower travel speed, thereby boosting the rate towards the 150 lites/ha range,” he adds.

The knowledge exchange website sprayers101.com and social media channels have been hugely successful in getting best-practice application advice out to Canadian operators.

Predominantly sponsored by grower levy money collected by large commodity companies, the website gets about 530,000 page views each year and is packed with insightful information about spray application.

Tom Wolf (@nozzle_guy) and fellow expert Jason Deveau (@Spray_Guy) of the Ontario Ministry of Agriculture and Rural Affairs (OMAFRA) produce most of the material and are also regular tweeters of all things spray-related.

Twitter is seen by Mr Wolf as a game changer in speeding up knowledge exchange and better promotion of responsible spraying across the vast Canadian prairies and beyond.

“In all our activities, our focus is the interests of the producer and we believe that we can only have credibility if we are perceived to understand the applicator,” he says.

“Only if we have that line of communication will it be possible to promote beneficial practices – it is a question of trust.”