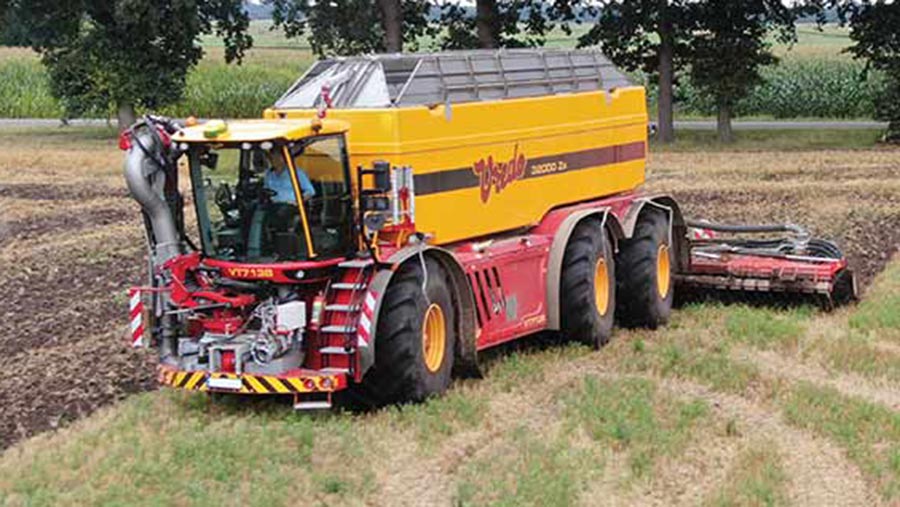 The six-wheeled VT7138-3 replaces the outgoing VT7028, though the bones of the new machine remain broadly unchanged with equal-sized steering wheels to offer a decent turning circle and minimal compaction. There is also the option to crab steer along the field, so each wheel runs in its own path.

The VVT700 transmission has been developed by Vredo and includes two stepless speed ranges – 0-20kph and 0-40kph.

A 32,000-litre slurry tank is standard fitment but models can be specced with Vredo’s Flex Tank, which sees the capacity split to provide separate 25,000-litre and 7,000-litre vessels. A sugar beet bunker and solid manure spreader are also available.

The positive-displacement PF12000 pump unit has a 12cu m/min capacity and there’s the option of a 16cu m/min “turbo filler” centrifugal system located on the 10in-diameter telescopic loading arm.

The Claas-sourced cab and front axle are suspended, and other luxuries extend to air conditioning, a Grammer Maximo seat, two screens and a joystick, with the software developed in-house.

The first of the new models will be delivered in the spring.