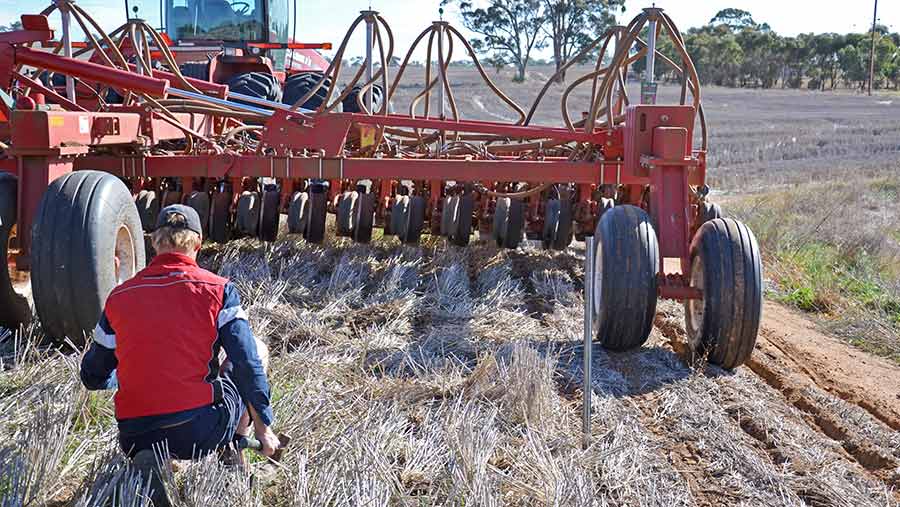 Ben Marshman with his Aqua Till trial rig

Just when you thought variable rate, variable depth, turn compensation and limitless fertiliser combinations had taken drilling technology to its limit, the rule book has been blasted open once again.

This time the blasting is being done by a waterjet that replaces disc or tine residue managers and coulters, slicing through post-harvest trash to form a slot ready for the seed to be dropped in.

The never-seen-before system is being developed in Australia – considered by many to be the ancestral home of no-till farming – with the help of a specialist US waterjet company.

Although the kit is still in its formative development stages, there’s a burgeoning demand from Aussie farmers for an effective way to cut through surface trash – vital for conserving late summer soil moisture – during seeding.

The other benefit comes in side-stepping zero-till drills’ voracious appetite for wearing metal.

With drought pressures unrelenting, replacing metal coulters with waterjets should address the perpetual challenge of getting the drill to bite into the ground, allowing the operator to easily crank up the pressure to get a consistent seeding depth without having to put so much weight on the drill, no matter how hard and dry the soil is. 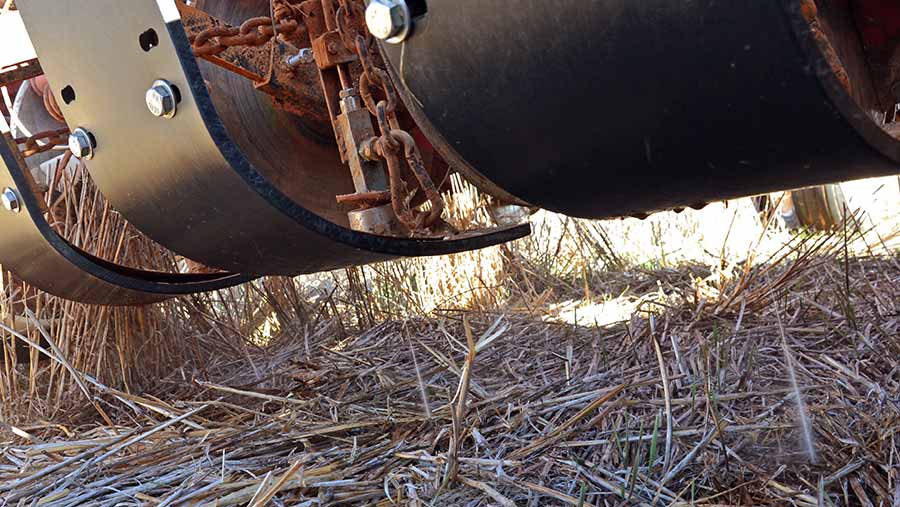 The high-pressure waterjets cut through trash

Aqua Till kits can be adapted to run on all sorts of broadacre seeders and row-crop planters, but the exact layout and fitment of the technology is down to the manufacturers that choose to offer it.

The designers also hope to offer retrofit packages that will allow keen growers to fit the kit to their existing drills.

The system uses ultra-high-pressure (UHP) water to slice through trash ahead of a conventional opener, which drops the seed into the gully without any interference from existing surface residue.

The liquid coulter has been developed through a collaboration between the South Australian No-Till Farming Association (Santfa) – a not-for-profit organisation heavily involved in field trials – and US-based waterjet maker Flow International.

See how it works in this animation.

Central to the unusual system is a pto-powered pump that pressurises multiple nozzles, offering the flexibility of adding or removing sections to suit crops drilled at different row widths.

Of course, wide rows use less water than narrow ones, while thick-stemmed crops require bigger nozzles and more power.

The business end involves an industrial-spec sapphire or diamond orifice that fires water at the field surface at three times the speed of sound.

Each jet sits up to 70mm above the surface residue and is plumbed through to a main water or liquid fertiliser tank.

As a guide, Santfa’s Aussie trials suggest that between 120 and 450 litres/ha is enough to sustain trash-cutting capacities of up to 35t/ha at forward speeds of 12kph and with rows spaced at 300mm.

The water rate reduces with less trash and wider rows.

The beauty of a waterjet is that it can scythe through any combination of materials (unlike the somewhat crude bulldozing action of a metal tine, for instance) and can be easily adapted by way of pressure and nozzle size to adjust its cutting power.

Changing one of these parameters provides a simple way of tweaking the depth of the slot.

Each jet runs on its own ski to soothe the relentless vibrations. The sewing-machine-like setup helps keep working height consistent and also provides reasonable compression of the residue, which drastically improves cutting consistency.

In real-world use, growers will probably benefit from rolling the fields perpendicular to the direction of the rows to improve the cleanness of the Aqua Till’s cut.

Provided the water pressure and nozzle size are calculated correctly, the waterjet should fire a stream straight through the profile to seeding depth, at which point it will open up to form an onion-shaped bowl of loose soil.

This aerated earth at the base of the trough is light and easy to penetrate – characteristics that are central to encouraging the germinated seed to root rapidly and grow quickly.

Placement of the seed remains mechanical – the Aqua Till system is only responsible for cutting the slot – so the kit can be adapted to run on most types of drill.

Growers are likely to favour disc-based systems, given that the risk of hair-pinning (where straw trash lies lengthways in the slot underneath the seed) is all but eliminated.

In terms of drill design, half of the soil-engaging parts on existing machines are designed solely to deal with residues, so carrying the waterjets will allow them to be much shorter.

There is also less soil thrown out from the slot, which will please particularly pernickety no-till extremists.

Santfa’s trials suggest running the seeding rig at 6-12kph for a reasonable balance between cutting performance and output. 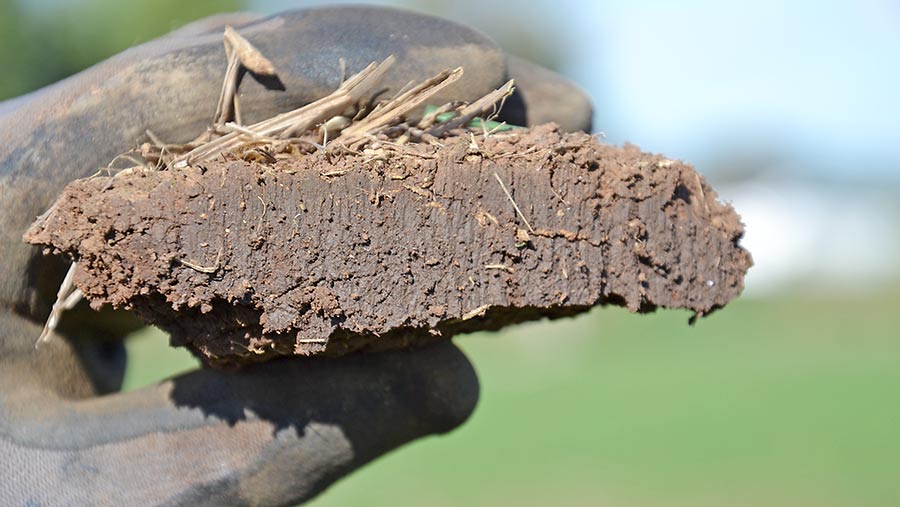 The waterjet cuts straight through the soil profile

Interestingly, cutting standards don’t diminish as quickly at high speeds as you might expect – running at twice the forward speed might see a 50% reduction in water use, but only 20% less straw is cut.

Conversely, halving the working speed from 12kph to 6kph (and in the process doubling both exposure time and water consumption) sees just an 18% average improvement in cutting capacity when using the larger 0.23-0.3mm nozzles.

Water isn’t the only ammunition that can be fired through the jets – farmers have the option of concocting combinations of suitable liquid fertiliser, herbicides or insecticides to reduce the number of passes required post-drilling.

Products such as UAN have a higher bulk density than water but move more slowly, and so offer roughly the same level of cut when applied at the usual 3,450bar pressure.

For farmers already applying lots of fertiliser while drilling small-seed crops, Santfa reckons the Aqua Till kit will squirt liquid UAN more evenly through the soil profile, reducing the toxicity risk in the process.

The end result is that growers should see much better early vigour and therefore better, more uniform establishment.

When will we see one in the UK?

Given that our thick wheat crops leave far more surface trash than Australian crops, having an effective means of chopping through them can only benefit seeding consistency and reduce hair-pinning/blockages for UK-based zero-tillers.

The only concession British farmers may have to make is in nozzle size – they are likely to have to be much bigger and use more water, albeit at the same pressure.

That said, water logistics – both sourcing and moving – aren’t likely to be a stumbling block in the UK and farm sizes are far smaller than those at the trial sites in Australia.

Tests also suggest that already wet surface residue cuts much better than dry because air pockets (both between straw and within straw) cause the jet to spread – an aspect of the machine that should dovetail nicely with Britain’s catchy autumn climate.

Of course, whether we see it in the near future depends on drill makers’ willingness to develop purpose-built machines that can be fitted with the waterjet kits.

In the meantime, Santfa’s development manager, Greg Butler, is keen to travel to UK farming conferences and explain the Aqua Till tool in more detail.

For the past couple of years, the Aqua Till kit has been trialled in South Australia – the perfect test bed for seeding innovations given the generally poor soils, extreme weather and very tight drilling windows.

Such extremes have forced about 85% of growers to move away from traditional deep ripping systems to operate some sort of no-till approach to conserve moisture during barren years.

One of the earliest zero-till adopters was Ben Marshman, who runs a 3,700ha arable farm near Owen, about 50 miles north of Adelaide.

He made the switch to a disc seeder 15 years ago and remains in the minority, with 75% of the state’s no-till farmers still opting for tine-based setups that are more versatile and less prone to hair-pinning in the slot, but which also cause more topsoil disturbance.

Mr Marshman’s system relies on trash cover to prevent sunlight hitting the soil, which helps retain moisture and improves water penetration. In particularly parched years such as 2018, yields have suffered badly where trash was missing. 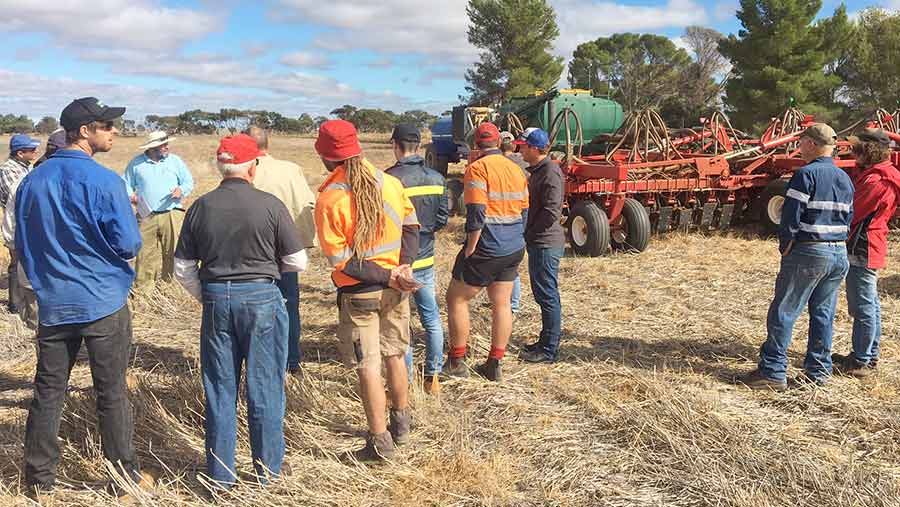 A field day demo of the Aqua Till in South Australia

“Our rainfall is low, but we’re gradually seeing a gain in soil moisture – we build up a little bit more each year,” he says.

“Rain has been particularly inconsistent [in 2018] – we’ve had 233mm, down from the 425mm average. Local growers using more intensive establishment systems have seen their canola yields drop as low as 900kg/ha this year but, by comparison, we’re hanging on at around 1.8t/ha and there’s still some deep moisture below 1m.”

“That water gain is evidence of the long-term advantage that the disc seeders have over tines.”

However, leaving long-stemmed residue on the soil surface can cause major headaches during drilling season, with Mr Marshman’s disc seeder particularly highly strung when it comes to damp straw hair-pinning in the slot.

“If we’re not careful, our germination rates can really suffer because of the hair-pinning. We have to be disciplined about when we run the seeder – usually it’s only for about 11 hours/day (9am-8pm).

“Heavy dews make things damp and we need the straw to be brittle for it to cut nicely under the disc. It’s a stressful time as the sowing date is imperative – for every two weeks outside of the optimum date we can expect a 0.5t/ha yield penalty.”

With that in mind, Mr Marshman got involved in a single-row Aqua Till trial four years ago.

“Having a reliable means of cutting through trash in both wet and dry conditions would open up the potential to run the seeder 24/7, in turn getting crops in the ground bang on schedule,” he says.

“That way, we can keep a thick bed of trash over the stubble without it causing problems during seeding.”

Although it doesn’t completely eliminate the risk of hair-pinning – studies suggest that even inch-long straw can cause trouble – it should markedly extend the daily working window and save money on wearing parts, too.

“The other benefit is the potential to put some fertiliser down at seeding. We’ll be looking to introduce UAN to the water stream to increase uptake and we’ve also got the option to put insecticide where the seed is going, rather than wiping out the whole field.”

How Aqual Till was developed

Having seen industrial-grade waterjet technology carving through everything from cheesecake to metre-thick steel and tank armour, he set about researching the prospect of adapting it to an altogether rougher life in agriculture.

In particular, a 2009 survey revealed two major problems with existing Aussie low-till/no-till systems: getting seeders to penetrate the ground when sowing after a hot summer and hair-pinning on the disc or tine – both of which could be solved with a finely-tuned waterjet.

His hunt for a specialist manufacturer took him to US company Flow International, which committed to supplying simplified, lower-cost kits for agricultural applications comprising pump, plumbing and nozzles.

Eight years of development work came to fruition in 2017 with the farm-scale commercialisation of the UHP waterjet project.

However, Flow is simply a specialist water-jet company and is offering the kit to farm machinery manufacturers around the world that are interested in using the system to evolve their range of drills.

So far, one company – drill and cultivator company NDF, based in Narromine, New South Wales – has jumped on board as the first Aqua Till agent in the world and is in the early stages of adapting its custom-made seeders to carry the jets.

It’s still a fair way from full production, with trials currently looking at the optimum distance between the jet and the ground, reducing plumbing fatigue and improving the suspension.