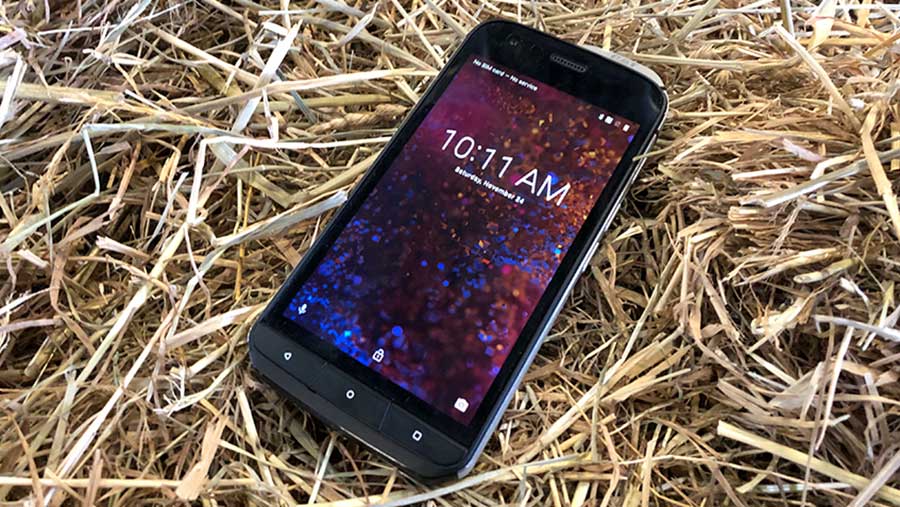 Smartphones and farm life don’t always make for a long and happy story, with rough use, mud and accidents dispatching countless units to handset heaven.

Tough smartphones like the new S61 model from Cat are designed to survive such mistreatment. We tested its beefy credentials on a beef and sheep farm in Somerset.

The S61 is the latest incarnation of Cat’s flagship tough smartphone. It’s designed to take the punishment of a hard life in the hands of your average farmer.

It runs the same operating system as any other Google Android smartphone but comes with some interesting extras installed to help make farm tasks a little easier (more on those later).

One look at this handset’s heavy duty exterior you won’t be surprised to learn that it’s drop-, water-, dust- and scratch-proof.

How tough are we talking?

Very. Cat says you can drop the S61 from a height of 1.8m without fear of it shattering on the concrete milking parlour floor.

We gave it a good go, plunging the 259g phone five times from maximum height. The hard-as-nails handset soaked up the battering during our deliberately butter-fingered moments, with only some light bodywork grazes to show for its mistreatment.

Using it in dusty situations during harvest is fine too – those annoying bits of chaff won’t manage to worm their way inside this screen.

With the USB, headphone jack and SIM/SD card hatches battened down, we plopped it in your standard muddy field gateway five times, each time fishing it out after a few seconds and giving it a quick shake off.

We were amazed to find that not only did the phone’s “extreme waterproofing” block any brown liquid from seeping inside, the gritty mud didn’t stop the physical buttons from working.

Cleaning it after a muddy mishap doesn’t need to be a delicate affair either – this phone can withstand a good blast from a powerhose or be submerged in 3m of water for up to an hour.

The touchscreen was occasionally temperamental right after a dunking, not quite responding enough to allow us to unlock the phone, but a quick pat-dry on the trouser leg sorted that.

It’s worth mentioning that the S61 is equipped with the latest scratch-resistant glass to help resist unsightly marks. Some nasty face-first collisions with a concrete floor yielded nothing but the faintest of scratches.

Watch the video below to see how the S61 coped with its tough day on the farm.

What are the technical highlights?

It runs Android’s Oreo operating system and has a dual SIM tray, meaning you can sign up to two networks and switch between them to get the best signal.

Crucially, it also has a whopper of a battery – a 4500mAh unit that provides 35 hours of talk time.

Over the course of a weekend’s regular use we didn’t need to charge it once. But then it needs a big battery to power the more energy-sapping features, including the laser.

That’s right, this smartphone genuinely fires a bright red laser out of its back. But before you start daydreaming about James Bond levels of gadgetry, this thing absolutely can’t be used to cut through steel locks or defeat evil geniuses.

What it can do is measure distances and the size of objects with reasonable accuracy at up to 8m. We tried it out by measuring the side of a potato box and found it was generally accurate to within 5% of the true dimensions – good enough for quick estimates when the tape measure can’t be found.

The other feature that could have come straight out of Q Branch is the S61’s thermal imaging camera.

This is not the first smartphone to boast such credentials – the S61’s predecessor, the S60, takes that prize.

Cat has upgraded this new phone’s eyes, making it the world’s first smartphone with thermal imaging in glorious HD on the 5.2in screen and also allows for live streaming over YouTube, should it take your fancy. 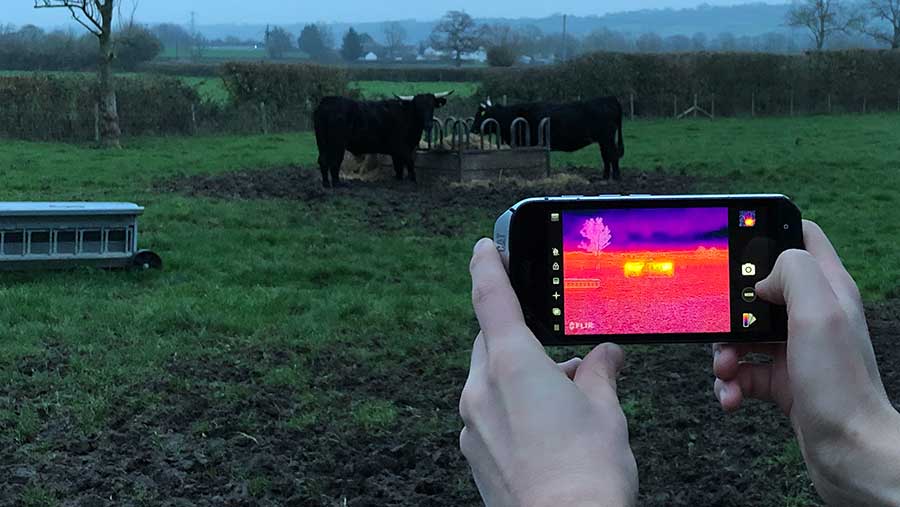 The phone has a nose to go with those heat-sensing eyes: a volatile organic compound sensor, to be exact, and it gets a whiff of the atmosphere around you every four seconds to detect particles which could be harmful to your health if exposed to them for too long.

We’re not talking about the sort of volatile organic compounds produced after a large helping of sprouts, but the ones you might come into contact with when dealing with pesticides, for example.

The “Air” app builds a graph of your exposure to these compounds over time and alerts you if things take a turn for the toxic.

Like the old model, the S61 has a funky-looking fin protruding from the top-right corner. This form has function, helping you to keep hold of its sizeable mass by giving your index finger something to wrap around.

How much is it?

The Cat S61 will set you back £799, although we’re reliably informed that prices will fall slightly as we near Christmas.

You might find the pricing a tad steep and we wouldn’t necessarily disagree with you, but bear in mind that it could last you a darn sight longer than your standard smartphone.

We were impressed by how well the Cat S61 endured everything we put it through on the farm. If you’re the sort of farmer who smashes through smartphones like they’re going out of fashion this could well be the answer to your prayers.

Yes, it’s a bit on the bulky side but it feels like a good compromise between technology and farm-proofness.

Remember, part of that bulk gives you battery life that is streets ahead of your average Android or iPhone.

With our sceptical hat on, we’d say the laser-assisted measurement gizmo, air quality sniffer and thermal imaging camera are all a bit gimmicky.

As features they work well but we’re struggling to see where they would genuinely come in handy on the farm.

Cat says farmers can use the thermal imaging camera to spot mastitis or hypothermia in lambs, although we’re not sold on the idea of them actually relying on this technology in the real world.

Being able to plug two SIM cards from different networks in, increasing your chances of making a call while out in the sticks, is a way more useful feature for farmers.

Head over to the Farmers Weekly Facebook page for your chance to win a Cat S61 smartphone for yourself.