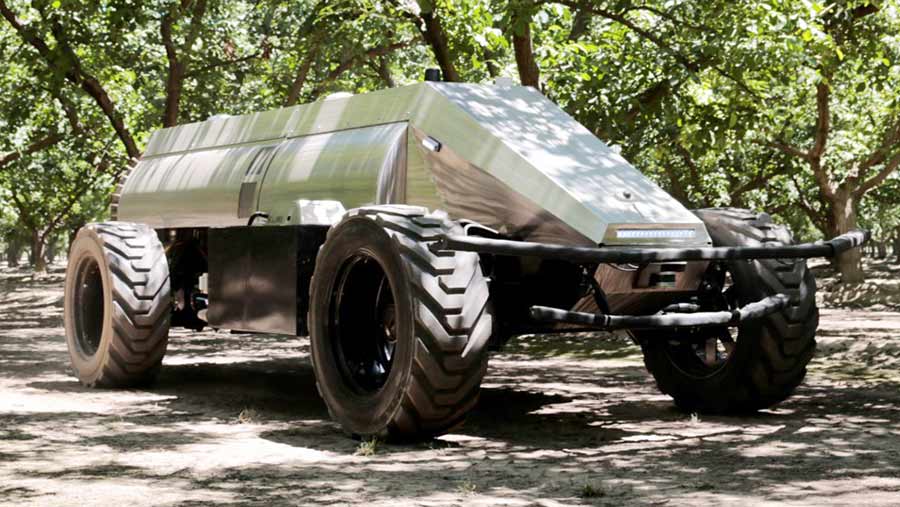 The rocket-like Global Unmanned Spray System (GUSS) uses a combination of GPS, vehicle sensors and clever software to allow one operator to remotely monitor up to 10 units at once.

Using a variety of positioning information avoids reliance on the GPS kit, which can be unreliable given much of the work takes place below the tree canopy.

A control van is used to keep tabs on the sprayers working in different orchards at the same time.

The low-profile shape of the GUSS is designed specifically to allow branches to flow over the top of the vehicle so as to not damage or dislodge fruit from the trees.

Row widths in orchards vary significantly, so Cricklaw built the GUSS with four-wheel steering to give it a turning circle of just over 5m.

This should allow it to comfortably swing from one row to the next.

Other notable spec details include a Cummins QSB6.7 engine rated to 173hp, which is fitted with a cooled EGR system to meet the necessary emissions standards.

So far, Crinklaw has built seven GUSS autonomous sprayers, which are operating as part of its custom spray application service for mid- to large-scale tree farms.

The California-based business is currently constructing a 20,000sq ft manufacturing facility in Kingsburg and expects to begin selling the units to interested parties later this year.

The company is no stranger to innovative developments – it also designed the industry’s first three- and four-row vineyard sprayers, mechanical vineyard pruners and the Tree-See orchard sprayer.