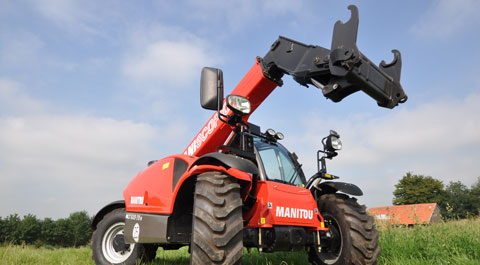 Though the smallest loader in the test, the MLT 625-75H achieved very respectable lift results. Manitou uses a 90 litres/min Bosch Rexroth pump and performance at our measurement point of 4.5m height and 1m in front of the machine was 2.3t, just 100 kg less than the Deutz. The average lift capacity of just under 3.8t was clearly higher too.

Because of the smaller pump, cycle times with the Manitou were a little longer. Despite this, speedy loader work could be achieved.

The breakout force is fine at 3.8t and matched the loader capacity. When tipping a bucket, the parallel linkage at first tilts the attachment slightly inwards, and then again outwards by 2deg. With the pallet forks it altered the angle continuously and achieved an angle of 4deg at full height – very good. 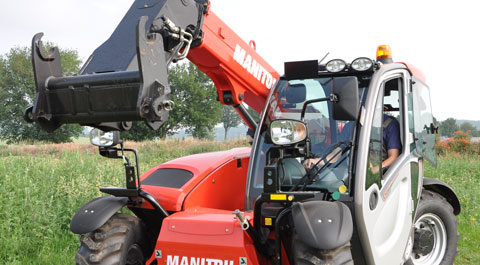 For the third service on the hydraulics the oil flow can be adjusted in the cab via the display. There’s also an external switch for pressure relief.

Engine power comes from a 75hp Kubota unit and a reversible fan is standard. Hydrostatic drive comes courtesy of Sauer Danfoss and measured pushing power was 2.8t in both gears, well under the figures of its bigger test competitors. However this performance matches the loader’s sizer.

The loader proved agile and handled well. One surprise was that its draft figures even beat the Weidemann. In second gear the Manitou can hit its maximum of 25kph. 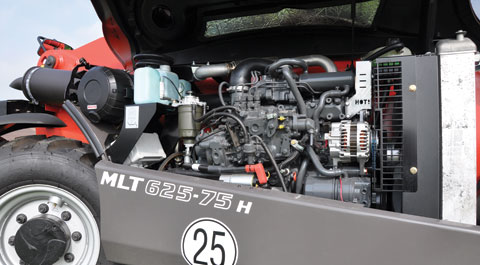 Steering mode is selected via a lever on the joystick. Two lights indicate the straight-ahead position for the wheels. From lock-to-lock the steering wheel requires less than three turns so steering reaction is sharp. The large brake-inching pedal is well positioned – with a more sensitive action it would have been perfect.

Manitou equipped our test machine with the optional “ergonomic” joystick. This involves your hand just lying on the stick rather than grasping it.

Direction of drive is selected by the forefinger, while the thumb operates the telescopic arm and the third hydraulic functions.

You quickly get used to the ergonomic controls, although the shape of the stick is a matter of taste. The regular version can be ordered.

The main switches lie to the right of the dashboard. Almost every symbol is clear and unmistakeable.

Despite its compact dimensions, there is enough space in the footwell of the Manitou cab, even for large drivers. However the windscreen is divided by a narrow bar where it extends into the roof area – we could have done without that. The wiper blade could also be a little longer – it didn’t cover the whole windscreen.

Visibility to the front is OK and the fact that the roof glass stretches a long way back gives the operator a good view of the fully raised boom and attachment.

Visibility to the left is good. And even though the lower half of the door is metal, this doesn’t really affect visibility as the operator sits very near to the door. To the right, visibility is restricted thanks to the low seating position and the biggish engine cover. Rearwards, the view is good. 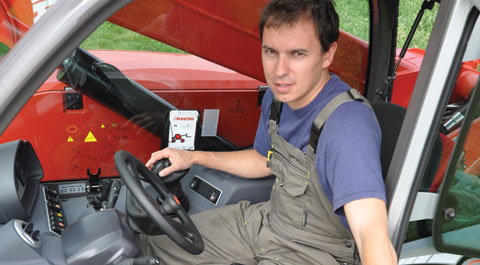 The engine on the right side is very accessible because of the roomy bonnet. The tank is hidden under a closable lid on the rear of the loader – a good way of doing it.