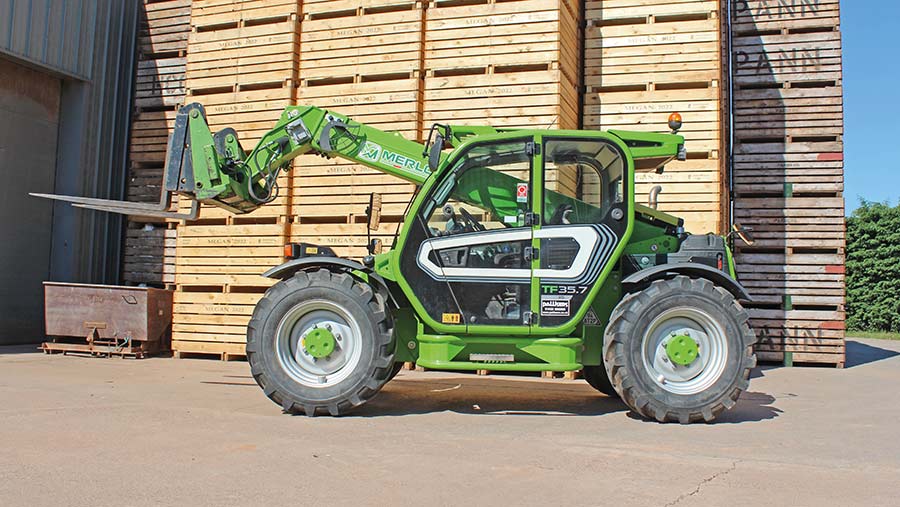 Merlo might play third fiddle in the telehandler rankings to JCB and Manitou, but the Italian brand’s compact models take a bit of beating.

Combining powerful hydraulics with some careful packaging, these neat machines can access low buildings and narrow openings, but still have enough lift capacity and reach to compete with physically bigger rivals.

It managed to achieve a 3.2t maximum lift capacity and fit a 6.4m boom into a platform that was just over 2m tall and 2m wide.

It sold in good numbers, but build quality was variable throughout the production run.

Early models featuring Deutz engines were some of the most reliable, and Perkins-equipped machines were solid enough, but the last Kubota-powered handlers gave more than their share of trouble.

Things changed in 2015, with the launch of the Turbofarmer II range. This has a host of upgrades, a return to Deutz power and smart new cab.

These machines also feature a nifty modular design, meaning parts are interchangeable throughout the range.

The direct successor to the 32.6, is the 33.7, packing an extra 100kg of lift capacity and 30cm of reach into a similarly sized package.

However, the larger 35.7 is arguably more popular, thanks to its larger 3.5t lift capacity for just a modest increase in proportions.

To find out how to get the best from these machines, we enlisted the help independent Merlo mechanics Stuart Linton, Phil Ingram and Steve Hodges.

Together, they have more than 35 years’ experience spannering these machines, all cutting their teeth at Herefordshire dealer Pallisers. 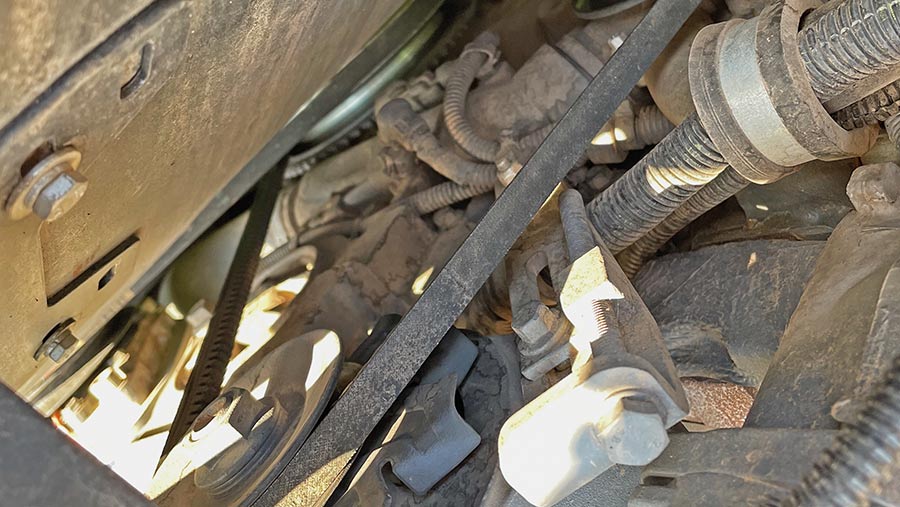 It’s a solid unit that rarely gives any trouble, but some of the ancillaries and emissions kit can play up.

One gremlin is the fan belt, which is prone to failure after about 1,000 hours; it’s worth replacing them every service, rather than waiting for them to give up the ghost. 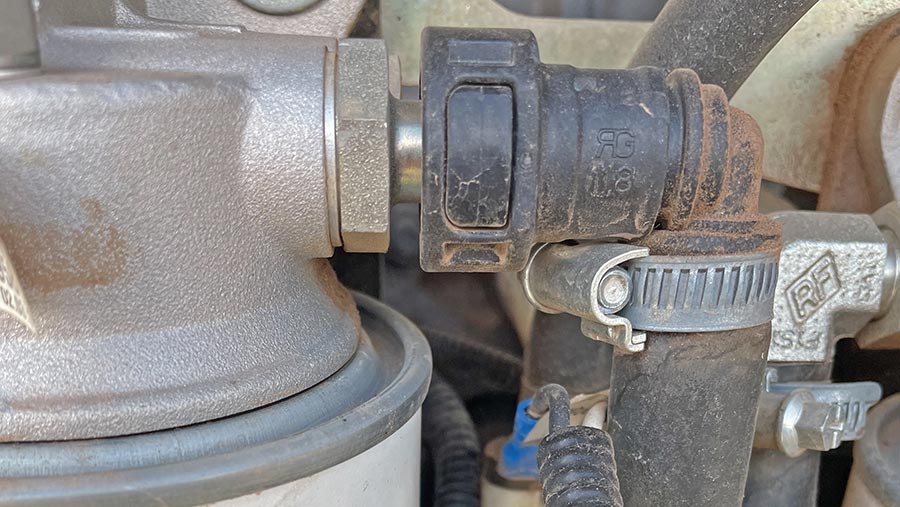 The electric fuel pump has a habit of burning out the fuse in the wiring loom at the rear of the engine bay.

These handlers need to have fuel pressure for the engine to crank so, when this happens, the engine won’t even attempt turn over.

The problem can be pinpointed by turning the ignition on, lifting the bonnet and listening to hear if the pump is running.

Most Turbofarmer II models are fitted with a diesel oxidation catalyst, which requires a regen every 1,000 hours – however, this has reduced to 500 hours on the latest Tier 5 models.

Drivers will get a light pop up on the dash to say when it’s due and it’s worth doing promptly.

If it is ignored for too long, the handler will eventually go into limp mode and a dealer will have to come out, plug in a laptop and perform a forced regen.

Merlos of this era are fitted with sensitive AdBlue quality sensors that throw a wobbly when the tank is filled with dodgy fluid.

If they do detect a problem, the handler will go into limp mode and throw up an error code.

The solution is to drain the tank, refill with good AdBlue and leave the ignition switched on until the error code clears.

Alternatively, if it’s left switched off overnight, the computer should have cleared the code by morning.

A better move is to take proper care of your AdBlue, keeping the container properly sealed and storing it inside, away from direct sunlight. 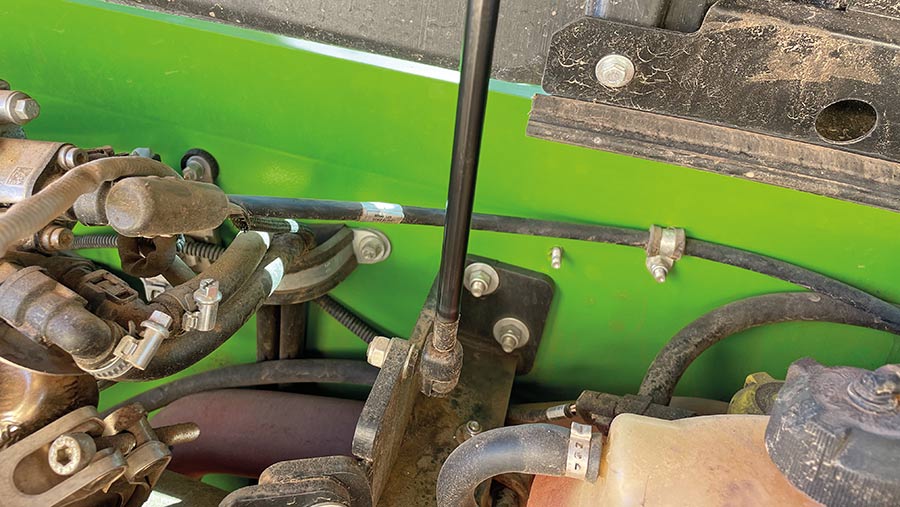 AdBlue is fed into the exhaust via a pipe with heater elements around the outside and this is a common part to fail, throwing up an error code on the dash.

It can be replaced with a heavier-duty version that doesn’t give trouble, prices for which range from about £180 to £250.

The seam around the coolant tank is prone to failure, causing the contents to seep out over time.

If you keep a regular eye on the levels, you will see it slowly dropping. However, most people notice it when the warning pops up on the dash.

Updated replacements are better made and cost about £300.

Merlo is famed for its hydrostatic transmissions and the 35.7 has the same two-speed version with static range change that the firm has been using for years.

However, the Turbofarmer II version gained some upgrades, some of which are good and some less so, particularly from a driver’s point of view.

The good part is that first gear has a wider speed range, meaning operators can happily use this for yard and field work.

On the old Turbofarmer models, first gear was a bit too steady, so many operators would leave it in second for all work, putting unnecessary strain on the components.

This protects the transmission from damage, but it can be frustrating for the driver when they’ve got a tough job to do such as mucking out or building a silage clamp.

Merlo recommends changing the transmission gearbox oil every 1,500 hours, but it’s a safer bet to replace it every 500 hours.

This is partly down to the fact that there’s no easy way to check the level and condition of the oil.

By the time the central panels have been stripped out to get the level plug, you might as well change the oil too.

The job is relatively quick and requires about three litres of EP80w90 fluid.

Transmission failures are rare on this generation machine, but the same gearbox has been known to go on older models.

Usually this is caused by bearing failure as a result of old or low oil levels, rather than it being pushed too hard. 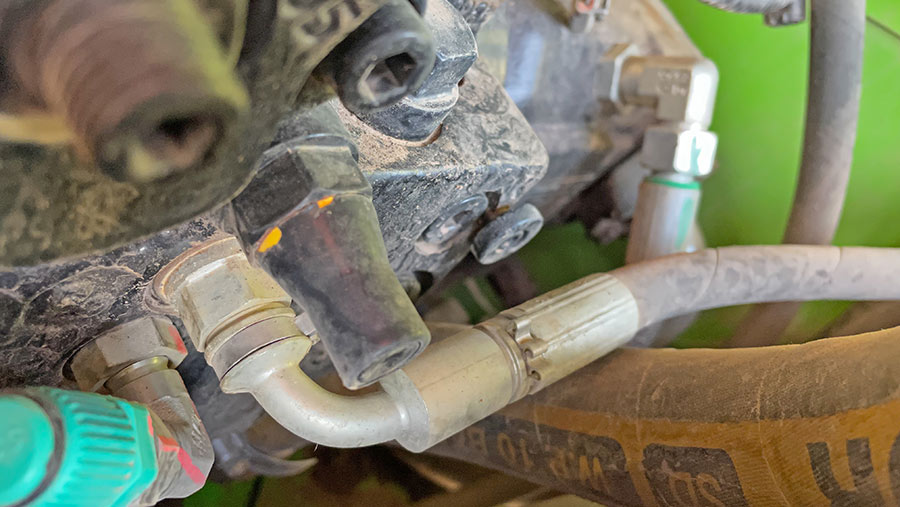 When the Turbofarmer II first came out, they had more than their fair share of oil leaks.

Some of these were a result of poor-quality hydraulic pipes perishing, but the biggest culprit was the swivelling hydraulic couplings with an O-ring seal.

The troublesome versions were black in colour and Merlo soon introduced a better silver version that rarely leaks.

Many early models will have had most of the fittings upgraded under warranty but, if buying one, it’s worth noting how many of the originals are still in place. 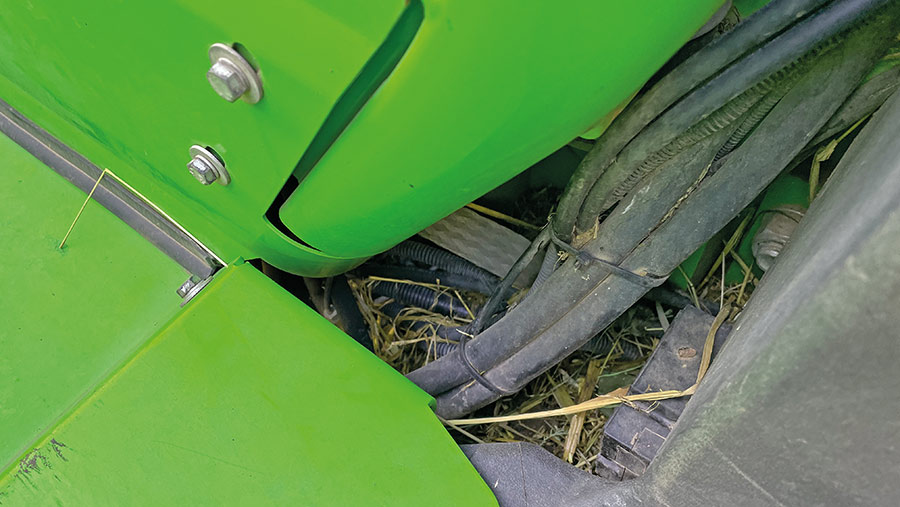 Merlo also switched to a more logical modular wiring system for these machines that has a series of interconnecting looms.

This makes it easier to diagnose and fix any problems, but the quality of the wires and connectors still isn’t brilliant.

As a result, wiring can corrode and fail where it’s exposed to dirt and moisture.

The most common troublemaker is a short loom that runs from the AdBlue pump to a panel between the cab and the diesel tank.

It sits in an area that’s notorious for gathering dirt and moisture, even on pampered machines.

Replacements cost just less than £60 and they are relatively straightforward to fit.

Brakes on the Turbofarmer II are power assisted, which means they are far less prone to sticking than they were on older models.

Thanks to the hydrostatic transmission, the brakes are rarely used by most operators, so the pads have a long lifespan.

The only thing to watch out for is brake pipe corrosion, where they run through the grime and moisture trap in front of the cab.

As for the handbrake, this is the same electric unit used on older models that comes on automatically when the engine is stopped. This rarely gives trouble. 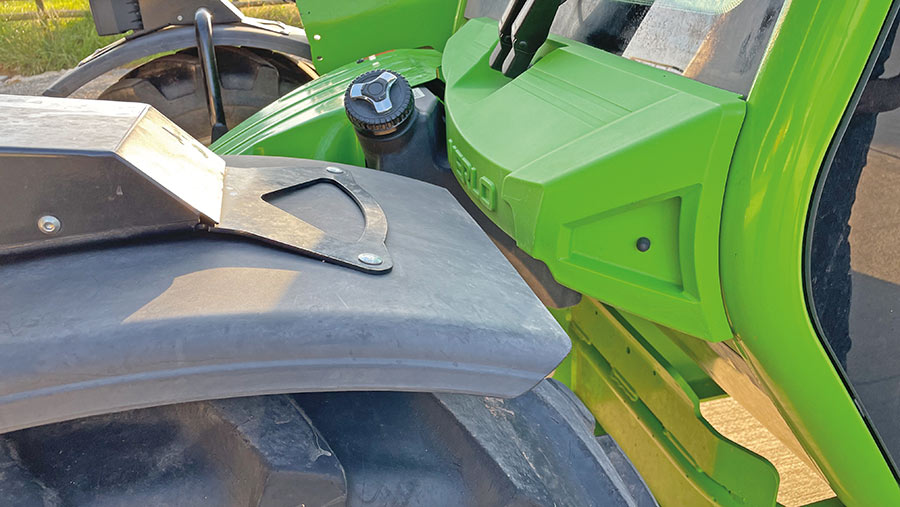 The short front mudguards are one of the most irksome features of the TF telehandlers, as they leave a gap for crud to flick up the windscreen.

This is less of a problem on the TF35.7, as there’s an additional piece of plastic trim on the front of the cab, but the smaller TF33.7 suffers badly from this.

One solution is to fit a second fender underneath the first, which protrudes further back, shielding the screen from the worst of the crud.

Unlike older Merlos, the current range uses electronic stepper motors to control the hydraulics rather than servo valves.

These help faster and more responsive performance and are, generally, more reliable. It’s rare, but stepper motors can fail, causing one of the hydraulic services to stop working.

They sit in the back of the machine on the main spool block and are pricey to replace at about £1,900 each. Most handlers will have four on board. 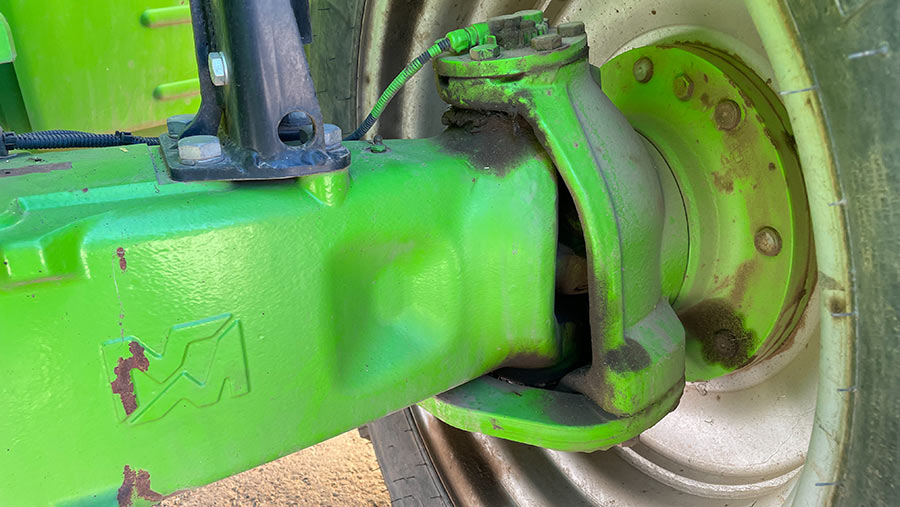 Oil leaks on the inner hub seals are not uncommon. These require the hub to be stripped down, but they’re an easy enough fix.

The offending seal costs just £20 and a complete hub seal kit is about £170. 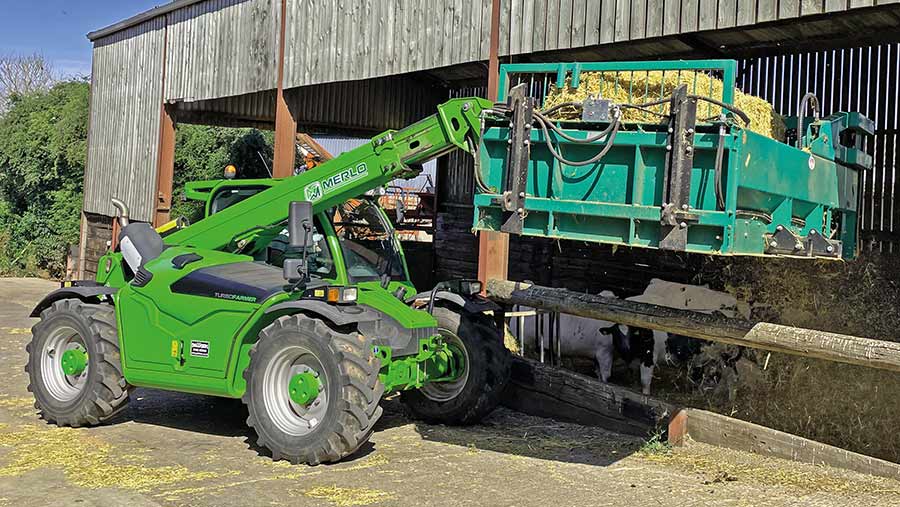 Herefordshire farmer Mark Panniers is on his second Merlo Turbofarmer telehandler, having moved away from a JCB 530-70 just over a decade ago.

He was a fan of the yellow machine, but he made the switch as he needed a more compact handler to fit under the egg belts in his chicken sheds, plus he has a good relationship with his local dealer Pallisers.

“I thought a lot of that machine and it was impressive what it could do for its size,” says Mr Panniers.

“But it was at its limit for some of the jobs we do, such as running the Spread-a-Bale, so when the time came to upgrade, we decided to get a slightly bigger model.”

This came in the form of the featured TF35.7, which arrived new from Pallisers 2019.

With a 3.5t maximum lift capacity and 7m reach, it offered a bit more performance than the 32.6 but, crucially, was still low enough to fit under the egg belts.

According to Mr Panniers, the 35.7 is in a different league to the 32.6, with a faster first gear for yard work and much more responsive hydraulics.

However, he still doesn’t rate it as a pushing machine and isn’t a fan of when the drive cuts out to protect the transmission.

“It wouldn’t be my first choice if we had a lot of heavy work to do with muck, clamp building or towing, but it’s ideal for most of the work we do.”

The handler has now clocked 2,300 hours and problems have been limited to an AdBlue sensor that was replaced under warranty and a couple of leaking inner hub seals.