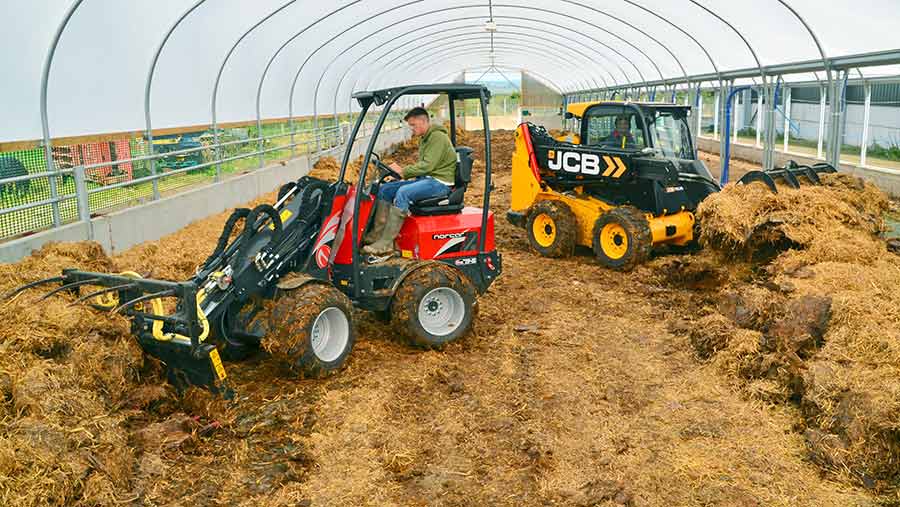 If you’re in the market for something that’s small and agile around the yard, but still has plenty of capacity to shift decent lumps of material, then you basically have two options – a compact pivot-steer loader or a skid-steer.

Both have traditionally been viewed as fairly specialist bits of kit, but over time their working credentials and load-handling capabilities have grown, and so has their popularity.

Earlier this year JCB launched its Teleskid. Like the firm’s previous skid-steer loaders, it has a single boom mounted on the right-hand side of the machine, much like a Loadall.

Following that theme, the newbie has a telescopic arm, allowing it to reach much further than any other smear-steer loader – it will lift more than 1.5t and reach north of 4m high (although JCB’s official figure for weight is 611kg, because of rules about how the figure can be quoted).

Likewise, compact articulated loaders have come on leaps and bounds in recent years and can offer some impressive performance — if you trust what’s listed on the spec sheets.

It was a couple of years ago that Finnish-made Norcar pivot-steers first appeared in the UK with Gloucestershire-based importer Moorend (which also builds specialist track systems for things such as JCB’s TM320 handlers).

We managed to get hold of the range-topping a7545 – a telescopic bend-in-the-middle machine rated to lift 1t to more than 3.4m.

We are fully aware we are not comparing like with like. In fact, these two are like lumpy old chalk and Camembert cheese – the JCB’s brute-like 4.4-litre engine offers 74hp and a healthy 400Nm of torque, while the Norcar dishes out just 45hp and 119Nm torque from its 1.5-litre Kubota block. 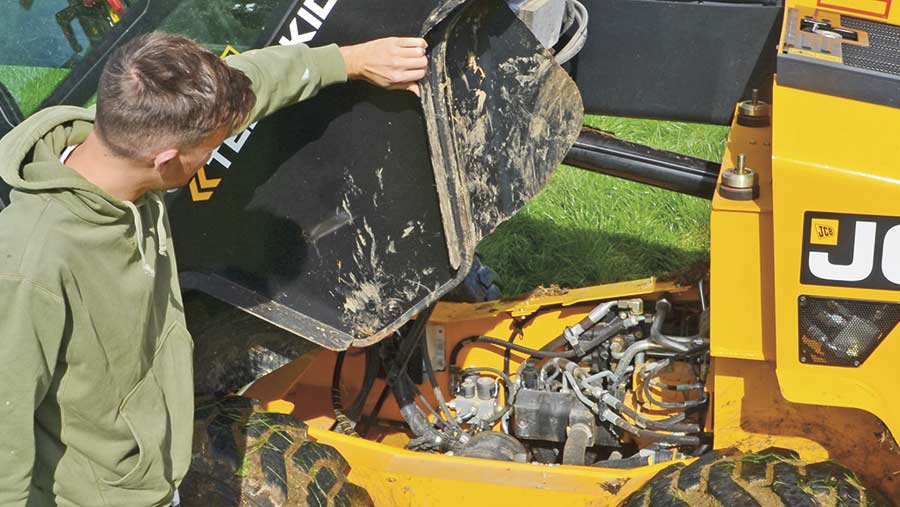 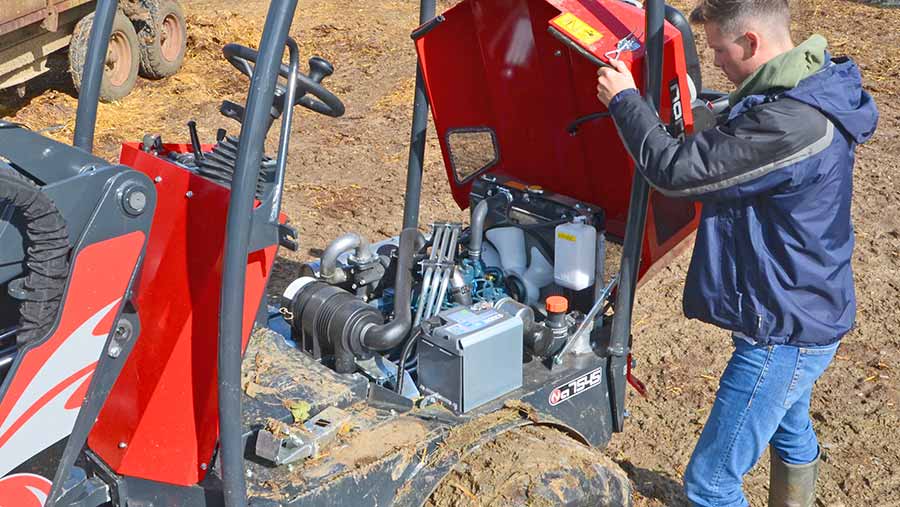 That rather stark mismatch delivered some pretty interesting consumption stats (see “Fuelled up”, below), but this isn’t a battle pitting one machine against the other; more a comparison of concepts. Which design suits which situation best?

Let’s start with the Teleskid, where access is pretty good compared with most other skid-steers.

Rather than clambering clumsily through a narrow front opening, the driver can enter with dignity through the left-hand door. Having a fully sealed cockpit offers all the perks of climate control.

However, on our pre-production model the door hung out of reach when open, so it wasn’t the sort of thing you would want to be hopping in and out of too often, and once cocooned inside it’s easy to feel quite divorced from what’s going on outside. 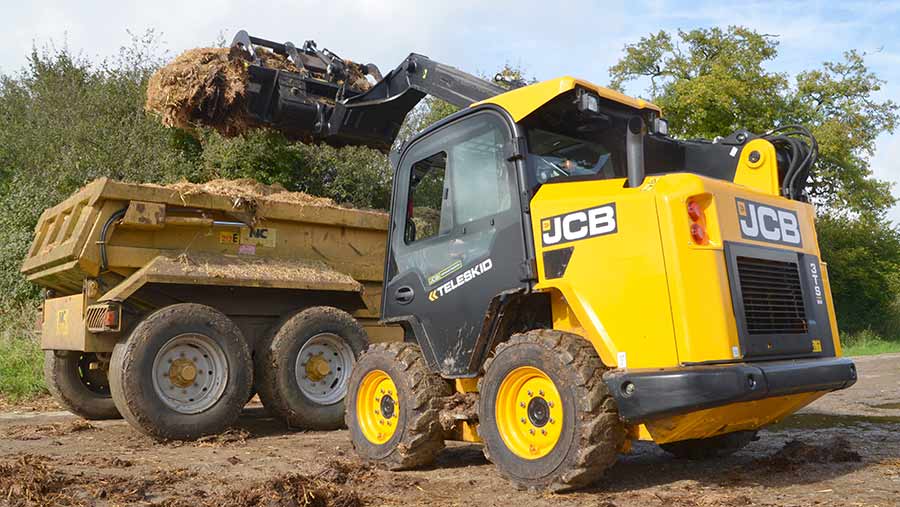 Getting it moving is a bit of a palaver, too. First you’ve got to drop down a roller-coaster-style lap bar and then the left-hand armrest.

Next you’ve got to deactivate the handbrake and activate the boom and auxiliary hydraulics with a series of three blister buttons. Now it’s ready for the off.

Initially it defaults to ISO-style twin joystick controls – left lever for forwards, backwards, left and right, and the right-hand one for the loader.

However, you can opt for old-school skid-steer standard H-pattern controls, tank commander-style.

As machinery-driving dinosaurs, we initially chose the latter but soon found that the modern way is actually more efficient – and certainly for any newcomers to the skid-steer world it’s easier to get to grips with.

In comparison, the Norcar is a doddle to drive. Like the Teleskid, a blip of the foot throttle gets the engine going, but instead of the stick, a heel’n’toe rocker pedal on the left deals with forwards and reverse.

High- and low-speed ranges are selected by a switch on the basic right-hand console – on the JCB kicking up and down is done with a more convenient joystick trigger. 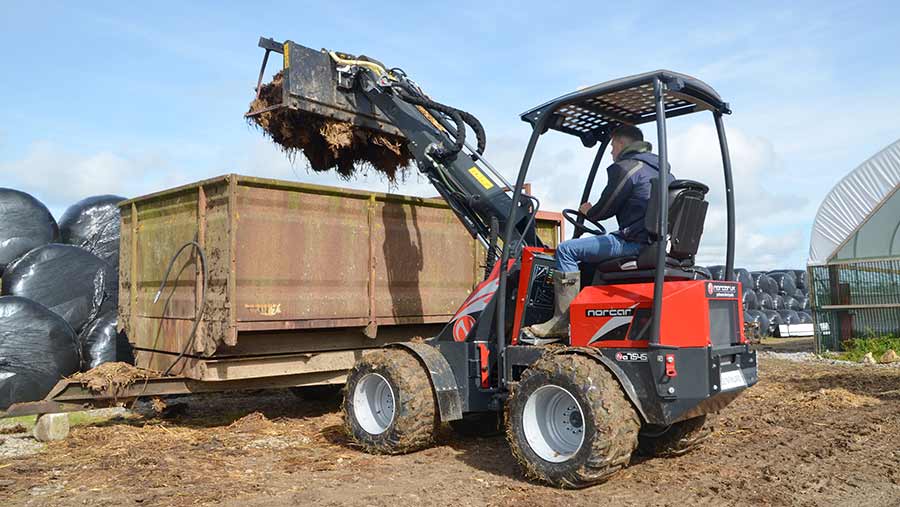 Access-wise, the fine-framed Finn has just a single step up to the open-air seat that gets weather protection from a simple steel-framed plexi-glass roof, but having limited protection from the elements is actually beneficial during work.

It means you can see and hear more clearly, which proved particularly handy for the delicate touch required around the edges of our chalk-floored polytunnel.

The horseback-style seating position guarantees a good view to all four corners and minimises the risk of clumping a stanchion, but such an upright layout also has serious implications on its balance.

With a full grab of muck and a heavy right boot it’s easy to cock a rear wheel as you spin the steering wheel towards full lock.

That was probably down to the fact that our test machine wasn’t kitted out with the optional counterweight of up to 450kg, which is definitely worth having if heavy lifting is on the agenda.

And there’s another downside to the Norcar design.

With our non-genuine attachment we found dump angle was compromised so that the fork clashes with the extended boom when it’s up at full reach.

That means that tipping sticky muck into a trailer required a bit of right wrist wriggling, although Norcar insists that you won’t have the same problem if you buy its own attachments.

The Teleskid has no such problems. Its forks drop well beyond vertical and its tail is kept on the deck by a lump of steel that loops around its rear end and makes up a good chunk of the 4.5t total.

That made a big tractive difference on our slippery chalk floors and, paired with a pretty generous 90 litres/min standard flow hydraulics, gives it a massive advantage when it comes to tearing out heavily-trodden hunks of muck.

It can shift more material far more quickly from the centre of the shed.

However, with its much wider body and pendulous posterior swinging about, it doesn’t feel nimble enough to get right into the corners without causing some significant collateral damage.

Like most skidders, it can practically spin on the spot (a turning circle of 3.52m).

The problem is that it churns the ground as it turns – so is no good for tiptoeing across wet grass fields – and the long overhang at the back somehow means the clumsier 4.82m turning circle of the Norcar makes it no less agile.

So which machine would we choose?

Both machines have their strong points and they complemented each other well in our test – the JCB kept busy ripping out the muck through the middle of the straw yard, while the Norcar was occupied with tidying up the edges.

The yellow bruiser is an out-and-out load-lugger, capable of shifting big tonnages of materials quickly – albeit in a bit of a bull-in-a-china-shop way.

While brilliant for swinging round in circles and chewing through lots of rubber, the skid-steer as a concept lacks the versatility of the artic loader.

Its sheer bulk and muscle means it wins when it comes to pushing power, but you would make a real mess whipping across the field to push in a few stakes.

So, if a more delicate touch is required for cleaning up around the heavily-trodden fringes, then it’s the dainty Norcar that has the edge.

There are also the prices to consider, and these things don’t come cheap.

The Norcar lists at £36,000, which includes quick-coupling hydraulics, parallel lift (something the JCB doesn’t have) and selectable dual pump hydraulics as standard.

The JCB commands more than £20,000 more, for which you get a more generous spec that includes air-con, air-suspended heated seat, boom suspension, two auxiliary services and a reversing fan.

However, it’s worth bearing in mind that you can buy a conventional four-wheel-steer Loadall (albeit a tiddler) for less money.

To get a measure of how thirsty these two muck-movers are, we conducted a very unscientific fuel use comparison. Both tanks were brimmed at the start and then again at the end with the amount used compared with the number of hours worked.

The JCB did 8.2 hours in the hotseat and chewed through a modest 29.5 litres of diesel, equating to an average of 3.59 litres/hour. Meanwhile, the Norcar put in an hour less labour but burned an unbelievably thrifty 10.5 litres in that time, making for a penny-pinching 1.47 litres/hour.

While this may appear starkly different, it doesn’t of course take account of the amount of material each machine shifted. When it comes to that, the Teleskid has the definite edge, being able to take properly greedy grabfuls without rocking forward on to its nose. In contrast, the frugal Finn shifts less material with each mouthful but picks through it in a more nimble, accurate fashion.

Specs side by side