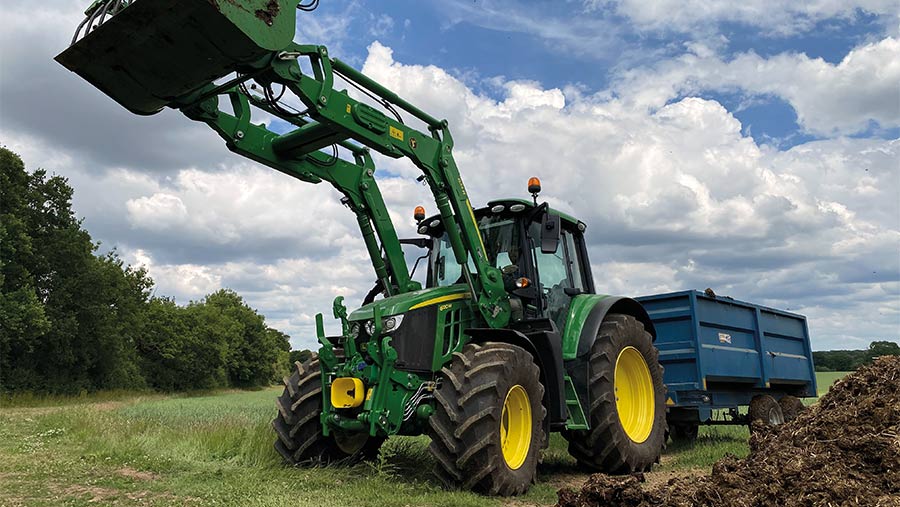 Last year’s unveiling of a heavily reworked 6M tractor range may have been lost in the razzmatazz of John Deere’s high-end tractor and combine launches, but these simple(ish) models could be big sellers for the brand.

Several horsepower brackets are covered by the extended range, but most of the engineers’ attention has been directed at short-frame tractors that fall into the ultra-competitive 90-120hp sector.

To increase their appeal, the old model’s boxy bonnet has been replaced with a neat, sloping version that makes it easier for operators to see what they’re doing when using a front loader.

Watch the video of the 6120M in action and read the rest of the report below.

Deere was uncharacteristically sluggish to offer this feature on 6Ms and, by its own admission, lost out on dozens of sales to Massey Ferguson’s 5700S as a consequence.

The reason for the delay is that the firm’s usual potpourri of emission controls – exhaust gas recirculation valves, diesel oxidation catalysts and particulate filters – take up a lot of bonnet space.

So, for the new short-frame 6Ms, this paraphernalia had to been abandoned in favour of a simple AdBlue-only system.

The thinning of emissions-related complexities is also bound to prove attractive to livestock farmers less keen on convoluted servicing regimes, and those that plan to keep the tractor well outside of warranty.

In a bid to gain attention from a broader farming audience, Deere also offers a stack of optional extras.

So, while stock farmers can stick with a spartan spec and keep the price well below its £80,000 list, those looking for more sophistication can load up with guidance, a slick-shifting gearbox and electric spools.

Droopy nose aside, the other big change on the M series is a tweaked version of the retired 30-series’ six-post cab.

Most notably, it has seen the conventional dash behind the steering wheel replaced by an A-pillar screen. As well as housing the performance monitors, it can be used to alter linkage settings, hydraulic flows, and run a basic iTec headland turn system. 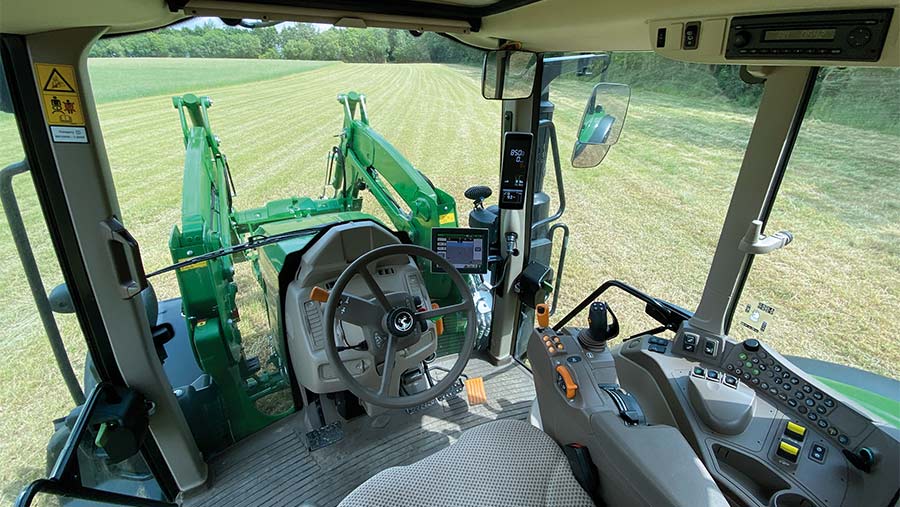 It is controlled via the same unfussy combination of scroll wheel and buttons as were employed on the 30s.

There’s also a port to mount a second screen just below, something Deere says is being requested by a growing number of farmers.

In particular, it will offer the capacity to control an Isobus-ready implement or provide section control for sprayers, spreaders and drills. 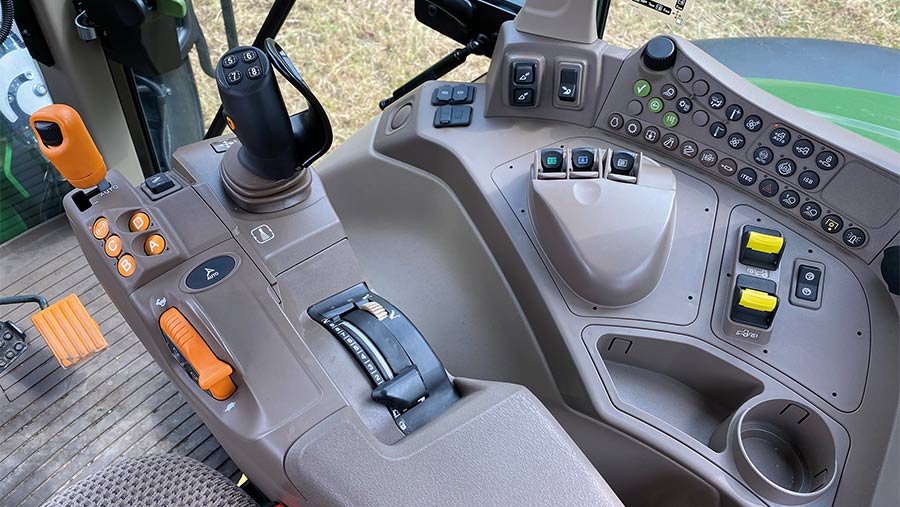 However, it’s worth bearing in mind that opting for the roof window – essential for loader work – means the GPS receiver can’t be buried under the lid like it can on bigger tractors, leaving it a sitting duck for thieves.

The cheapest models feature controls mounted on the side console, but upmarket versions come with a new slimmed-down design of the Command Arm armrest.

The stand-out feature here is the electronic loader joystick, which falls comfortably to hand, has a short throw and, frankly, is nicer to use than most fitted to telehandlers.

It can also be used to control rear implements and carries a forward/reverse shuttle to avoid having to take a hand off the wheel when shunting around.

Views outwards are slightly less impressive. Despite the pillars being thin and the expanse of glass plentiful, getting a good look at the push-back hitch when hooking on trailers is nigh on impossible.

Similarly, the “panoramic” roof window has a thick cross member that sits in the driver’s eyeline and adds little to upwards visibility.

Things don’t get much better when the firm’s R-series loader is fitted.

Its chunky design means there’s just no way of seeing exactly what’s going on with the headstock near the deck, despite the benefits that the drop-nosed bonnet brings.

As mentioned earlier, changes under the hood centre around a slimming down of emissions systems.

With the particulate filter and EGR arrangement gone, AdBlue consumption has inevitably crept up.

John Deere claims it has only risen to 5%, which is roughly 3% higher than bigger Ms and the R-badged tractors.

Behind the magnetic side panels, the engine itself remains unchanged, with Deere sticking loyally to its 4.5-litre four-cylinder in the short-frame line-up – the 6120M is the biggest of these.

One minor alteration is the addition of two engine-speed memories, which will be particularly handy for fieldwork.

Bigger 6.8-litre six-cylinder-powered models start at the 6155M, but these don’t get any kind of boost.

Early 6M tractors were available with the ubiquitous 24-speed Powr Quad and Auto Quad transmissions and, despite their age, these simple boxes remain highly sought after.

In fact, the company is still selling them on the 6215R, despite there being a clutch of fancier alternatives.

Our top-spec test tractor came with the lesser-known Command Quad – a fully automatic 24-speed gearbox that can rifle through ranges B to F without any operator input.

Handily, there’s the option of setting two starting gears, which you can toggle between using a rocker on the side console.

However, to combine it with the Command Arm package (including loader joystick F/R controls), Deere has had to fit a return-to-centre shuttle mounted on the steering column.

The big downside here is that it no longer offers a park position, a function replaced by a mechanical lever down to the driver’s left.

Gear shifting can also be controlled manually on the stubby stick, and there’s a new function that makes it possible to jump a whole range by quickly double-bumping it in one direction to save tediously flicking through all the speeds.

The handstick carries a scroll wheel, too, which can dial down the maximum forward speed limit, effectively working as a cruise speed when the foot pedal is pushed to the floor.

There are separate buttons to lock the transmission in one of the first four ranges, which will be useful in situations where a particular forward speed is required.

All versions get Auto Clutch, with four selectable grades of ferocity to save stamping on the clutch pedal when coming to a halt.

Similarly, 40kph is the official top transport speed across the board, though it’s so quiet in the cab – top speed comes at 1,650rpm – that it feels like it should be going faster.

For 50kph, buyers will have to look to the R-series.

In the case of the latter, it will lift 2,272kg to full height, but the heavyweight design seriously restricts forward visibility and the loader-mounted lights look precariously placed.

This weighs 20% less than the R-badged models and also does away with electrics and other complexities to keep the price down to £8,045. 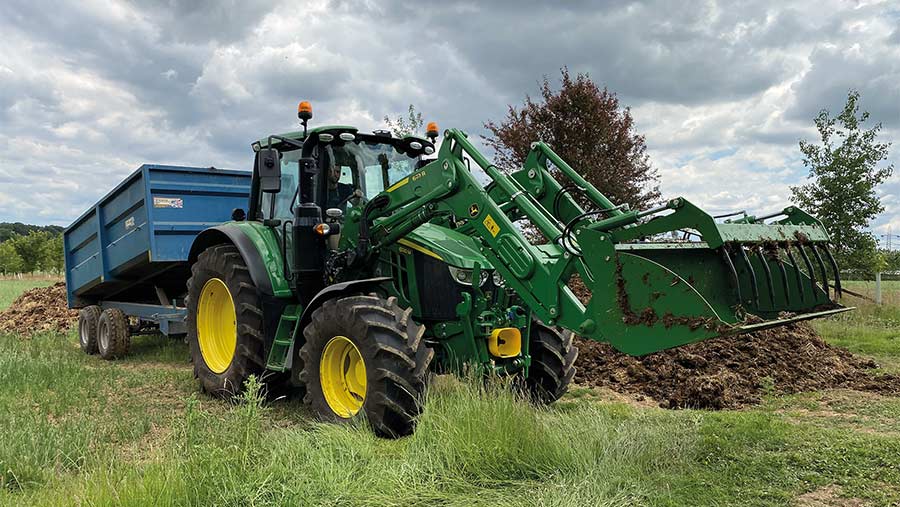 There is still the option to have a suspension system, and these will fit all tractors up to the 6155M.

Given that a lot of these machines will be fitted with a loader, a likely extra will be the upgraded hydraulic pump, from 80 litres/min to 114 litres/min.

This, paired with the short wheelbase and 4.35m turning circle, makes it pretty handy for tight yard work.

Getting the right spec

The redesign of the new Mannheim-built M series served as a prime opportunity to do some hard pruning on a range that has sprouted various derivatives since its inception in 2012, when it replaced the 30 series.

Several models have been consigned to the compost heap, including “compact” variants, badged the 6MC and 6RC.

The simplification of the line-up means the new models from 90hp to 195hp supersede all the current 6Ms.

This finally plugs a gap that has remained since the 30-series was retired, with the new short-frame versions offering something to match the old 6430’s 2.4m chassis.

The end result makes it possible to spec short-framers with as many optional extras as your bank manager will allow, to the extent that our test tractor had a list price of £135,000 (without the loader) – enough to make most buyers in this power bracket gulp.

However, by doing away with the expensive bits, the book price can be cut to nearer £80,000.

That begs the question as to where the fancier R-series, which starts with the 6110R, fits in.

The 6120R, the equivalent of our test tractor, is roughly £20,000 more than the M version with similar power, hydraulic capacity and 40kph top speed.

The silver lining is a bigger, fully loaded four-post cab and the option of slick Autopowr or Directdrive gearbox with a 50kph top speed.

They’re also a bit heavier and have a higher standard lift capacity.

The reality is that M models will dominate Deere’s sales in this power bracket and may well have a bigger share of things further down the price list, too.

Even the 6155R, one of the UK’s most popular tractors, has plenty of competition – notably from the 6140M, which tops out at 166hp and has an enviable power-to-weight ratio. It’s certainly no basic stockman-spec machine.

There is very little to dislike about the 6120M in top-spec guise, except for the price.

However, Deere says that by the time dealer discounts are added into the equation, buyers are likely to pay less than six figures, even for our fancy test model.

With such a loaded options list, the challenge will be speccing it right.

On the one hand, this means restrained shoppers can land a reasonably priced tractor, but those who get trigger-happy on the extras will quickly see the price spiral out of control.

Either way, the M series is now a genuine option for those outside the livestock farming bubble.

More information on prices and specs of the whole range