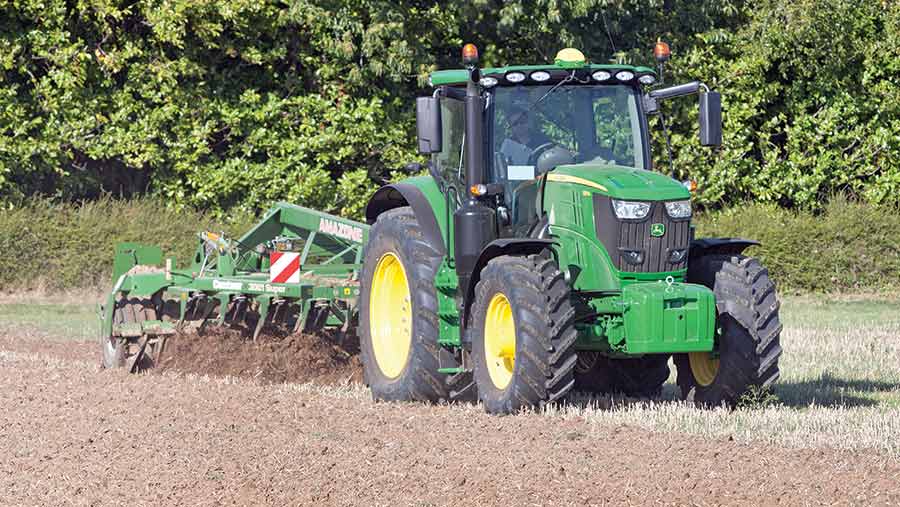 The John Deere 6175R’s spacious, quiet cab and well-thought-out controls made it a clear favourite among our test team.

We also got on well with the Directdrive transmission, which is smooth, economical on the road and blissfully easy to set up and use.

However, it is an expensive option and a little more focused on transport duties than fieldwork.

The engine also performed as expected, delivering frugal AdBlue use, but the myriad of emissions-reducing paraphernalia makes it worryingly complex.

When John Deere launched the 6R-series back in 2011, it ushered in a new four-post cab that offered more space, light and comfort than the version used on the 30-series.

It still takes some beating, particularly for noise levels, where it seems whisper quiet compared with the competition. Visibility is also good all round, it’s easy to get in and out of and there is a reasonable amount of storage space.

The only real downsides are the fact that the large one-piece door is a little unwieldy and there are no opening windows for natural ventilation.

Deere does offer a five-post cab option that gives a smaller left door and a small opening window, at no extra cost.

However, this only tends to be specced on four-cylinder tractors that are likely to spend time on loader work. 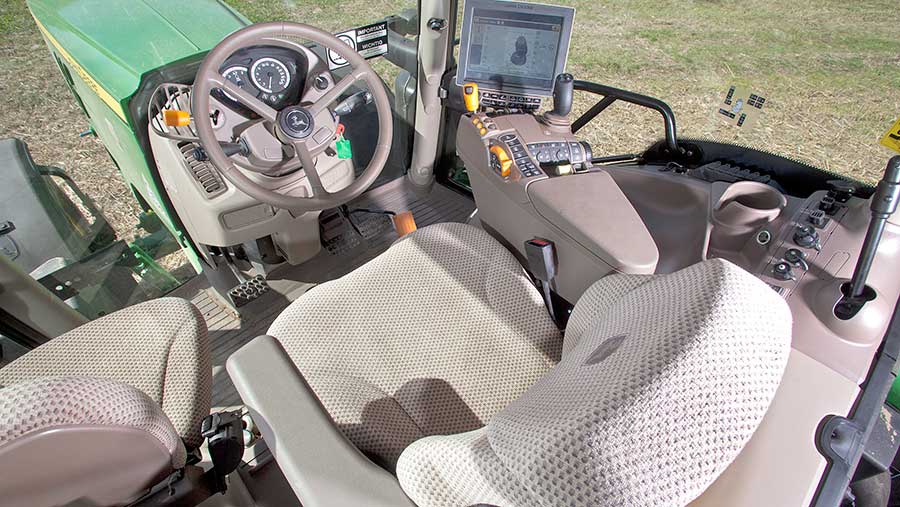 As for the controls, all Directdrive tractors now come with Deere’s Commandarm seat-mounted control layout and electric spools, making it a high-spec – and therefore expensive – option.

The armrest brings with it a large touchscreen display that houses most of the settings, from transmission and engine configuration to the hands-free phone and operator’s music library.

It is an area where the 6R stands out, as some of the other tractors on test still haven’t managed to get the screen fully integrated into the machine.

Navigating around the menus is simple and intuitive and as a result we found it one of the simplest tractors in the test to set up and operate.

The transmission controls are also logical and straightforward, with a small thumb lever similar to the one used on the Autopowr CVT.

However, there’s no option of a multi-function joystick, so drivers need to move their hand around the armrest to access the rest of the controls. 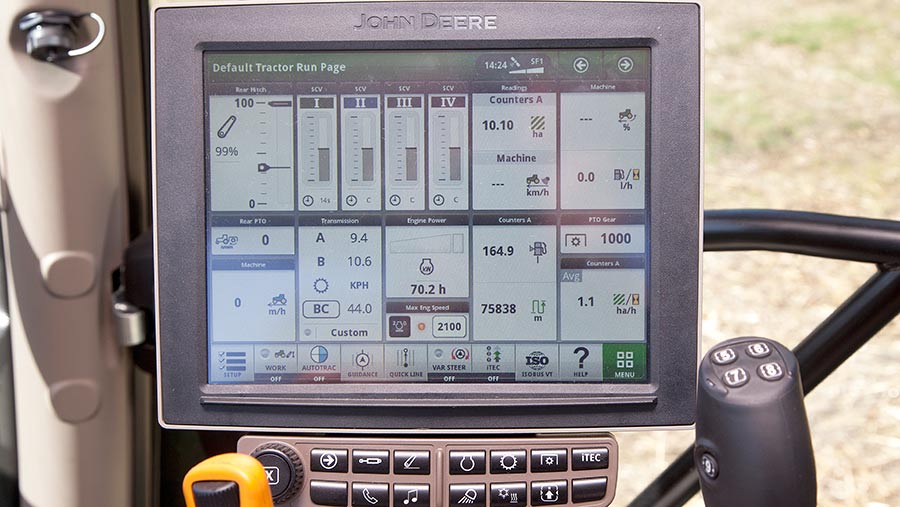 This is hardly arduous, but for such an expensive tractor, it is surprising that the joystick available on Autopowr models isn’t offered on the options list.

However, our biggest complaint in the cab was the linkage control layout, which was fiddly and less intuitive than previous setups – more on that below… 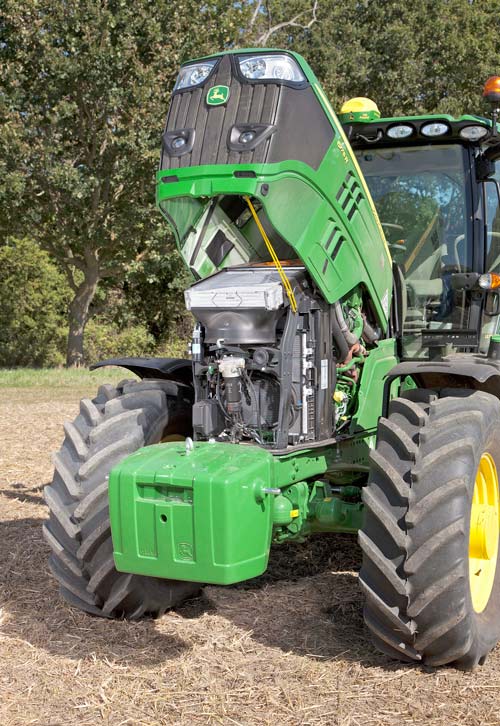 When emissions regulations started getting tighter, most manufacturers turned straight to AdBlue.

Deere held off for as long as it could, adding exhaust gas recirculation (EGR) values, diesel oxidation catalysts and diesel particulate filters to help keep exhaust gases in check.

But it was a policy that couldn’t last and when Stage 4i requirements came round, the firm had to give in and add a squirt of urea to the mix.

The firm has continued with that policy, and the current Stage 5 6Rs are fitted with every bit of emissions-related gubbins going.

This makes them more complex than some of the other tractors on test, but the plus side is that Deere promises low fuel and AdBlue use – from 1-3%.

When the tractor is working hard, the EGR is doing most of the work, meaning AdBlue use should be around the 1% mark, but if it is shuffling around on lower-horsepower work, the figure rises to about 3%.

Deere is also pretty confident that fuel use will be considerably below average, to the point that it offers buyers the opportunity to sign up to a fuel guarantee scheme.

This promises to refund the buyer if they go over Deere’s target average fuel consumption rate.

During our (admittedly unscientific) fuel test, we didn’t notice a marked difference between the Deere and the other tractors, though.

To get this, the tractor has to be moving more than 2.5kph with the pto engaged or 15kph without. That means the non-pto boost is of little use in the field.

On the dyno we got a recording of bang on 175hp, which tallied perfectly with Deere’s figure. Unlike some of the other tractors, there was no boost, as the tractor obviously wasn’t moving more than 2.5kph. 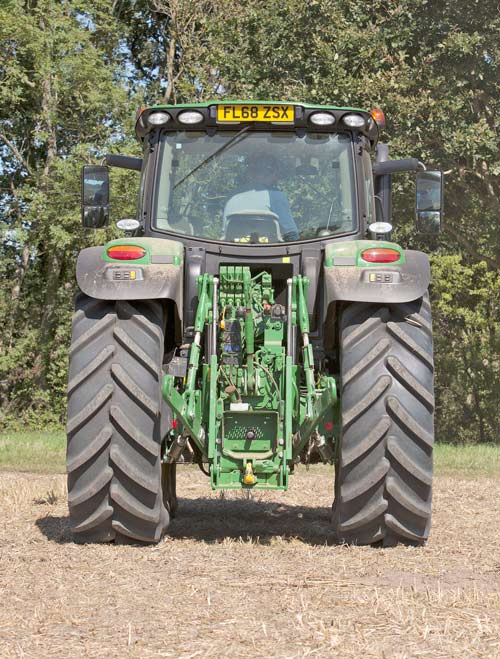 Our 6175R came fitted with Deere’s double-clutch Directdrive transmission that bridges the gap between its venerable Autoquad semi-powershift and its ZF-built Autopowr stepless box.

It’s a 24 speeder, with three ranges of eight mechanical gears that are shifted with a pair of clutches. These alternate their shifting duties so that one can be getting the next gear ready while the other one’s performing a change.

Drivers get the option of using it in manual, which allows all 24 gears to be shifted on the small gear lever, or in auto mode.

For fieldwork, this locks the tractor in A- or B-range so it won’t attempt changing between them. In this setup, the second clutch always has a lower gear preselected so that it can perform a swift down change if the tractor hits a slope or stiff bit of ground.

Moving to road applications, the auto function allows the box to fire through the full B- and C-ranges automatically.

But rather than defaulting to having a lower gear in reserve, the transmission’s computer controller tries to work out the driving situation and line up the most suitable cog.

For example, if the driver is accelerating hard, it will have a higher ratio ready and waiting so that the shifts up the box are as snappy as possible.

In its standard setup, auto mode attempts to drive the tractor as economically as possible. But it is possible to change the settings so that it operates in a higher rev range.

In general, we found the transmission was well suited to the cultivation work carried out during our test, and we like the fact it was so simple to adjust the target speed for the tractor to work to – it’s controlled by a simple scroll wheel on the gear selector.

We also found that it shifted smoothly through the gears when under load and had a decent overlap between ranges.

The auto-clutch function – which disengages drive when the brake pedal is pressed – also gets it impressively close to the drivability of a CVT.

However, as Deere will freely admit, the Directdrive box is geared a little more toward transport applications than fieldwork. For road duties, its full mechanical drive makes it the most frugal fuel user of the firm’s three offerings, with a claimed 91% efficiency.

However, when it comes to fieldwork, it will only drop to speeds as low as 2.4kph, making it unsuitable for some of the steadier tasks. There is no option of a creeper box either.

Unless the tractor is going to be spending a large proportion of its time on haulage duties, the small amount of extra outlay means the Autopowr will be a better bet for many.

Rear hydraulic options are plentiful on the Deere, with the option of up to six rear spools, or five and Power Beyond.

These are supplied with a 114-litre/min load-sensing pump, with the option of upgrading to 160 litres/min. 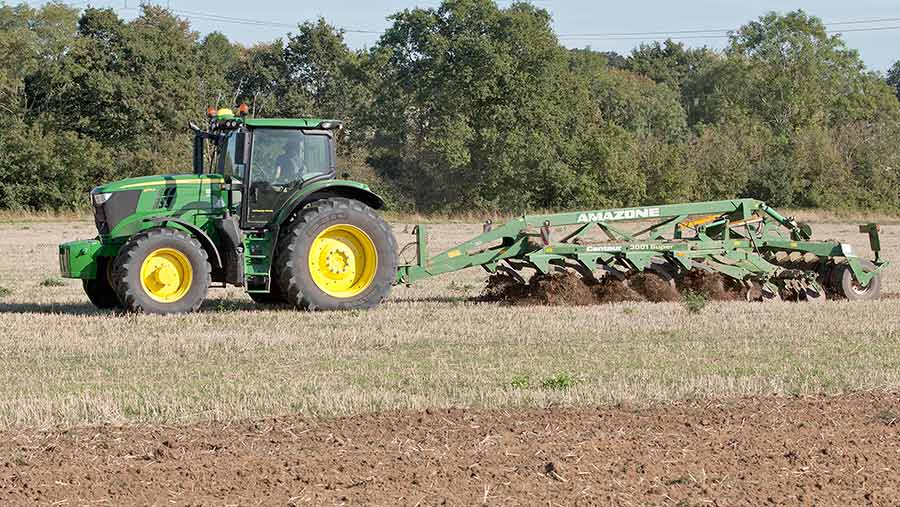 In the cab, the spools are controlled by a bank of paddles on the armrest. These are positioned well enough, but, weirdly, Deere has chosen to make one of them the manual raise and lower control for the rear linkage.

This makes it all too easy to grab the wrong paddle in a hurry.

The rest of the linkage controls – a depth wheel and quick-drop button – are mounted further down the armrest.

It’s a neat-looking setup, but it is not as handy to use as the old slug-like slider that the firm has used for years. This put all the linkage controls together in a much more logical fashion.

Deere’s 6R tractors come in four platform sizes and the four-cylinder tractors sit on the smallest, with a 2.58m wheelbase.

Our 6175R sits at the lower end of the 2.8m large-frame models, which top out with the 6215R – the most popular model in this size bracket.

As for transmission popularity, the semi-powershift Autoquad is still the biggest seller by some margin. However, the Autopowr CVT does have the bigger share in the larger models and it is the only option on the 6230R and 6250R.

Although the Directdrive offers a lot more automation than the Autoquad, it still sells in relatively small numbers.

This is partly because Deere only offers it on six-cylinder tractors in the 145-215hp bracket. But it’s also down to the fact that it comes in at just £3,895 less than the Autopowr CVT, which offers greater flexibility.

The firm still builds its entire 6R range in Mannheim, Germany, with production of the larger 7R range taking place in Waterloo, Iowa.