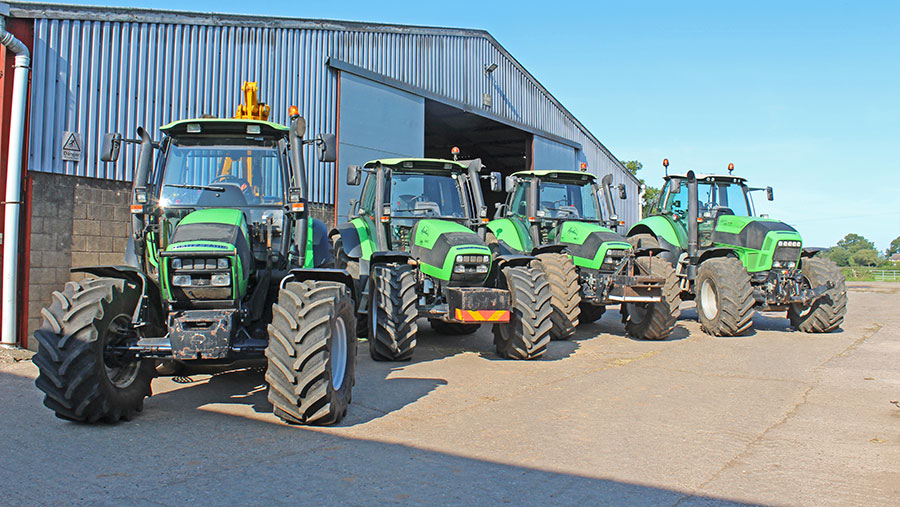 The main reason for the switch was that the brothers felt they had little to gain from increasingly complex electronics fitted to new models and couldn’t justify spiralling prices.

“It’s not as though we’re against modern technology – we’re always looking for ways of improving productivity, and if a piece of high-tech equipment can do that, we’ll definitely look at it,” says Martin. “But when it’s just a solution in need of a problem and we’re having to pay through the nose for it then we’re not interested.”

Until relatively recently, all of the Gibbs family’s tractors were kept for three or four years before they were sold or traded in for a new model. But as the price to upgrade kept increasing, along with the servicing costs and complexity, they decided to change tack. 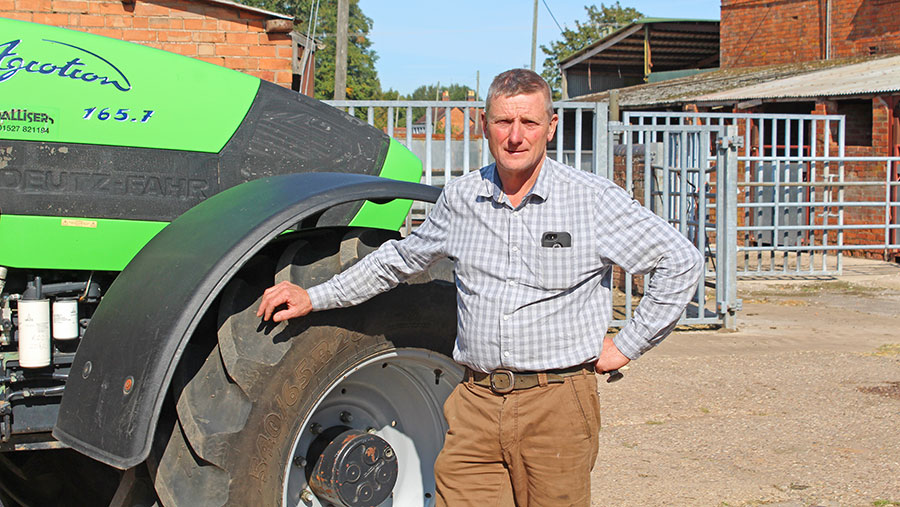 It all came to a head when they bought a JCB Fastrac 4220 and geared themselves up with GPS and variable-rate technology.

“We paid a subscription for one of the better-quality signals, but it just wasn’t reliable enough, and we spent so much time troubleshooting, we went back to the old-fashioned way,” says Phil.

They also felt the Fastrac’s Vario transmission didn’t put the power down as efficiently as semi-powershift tractors they’d run before and servicing cost £1,300 a time. “It was a nice tractor, but it was just too complex,” he adds.

Other tractors and machinery

Rise of the Agrotron

The brothers then realised that the Deutz-Fahr Agrotrons they’d been running for the past 15 years gave them everything they needed. “Most of them came out of the factory with a high spec – 50kph transmission, air brakes and electric spools on top-end models – plus they’re very reliable and second-hand values are going up rather than down,” says Martin.

As a result, the Fastrac was sold and they went in search of some good second-hand Agrotrons to bolster their fleet. With prices hovering at around the £30,000 mark, they were also able to up their tractor number, giving them greater flexibility at busy times.

The hardest part of the job was finding clean low-hour examples – something that’s getting increasingly difficult as more people cotton on to the fact they are such reliable machines, says Phil. “Sadly, we sold a few really good tractors back when we changed them according to age and hours.”

As well as being fans of second-hand tractors, the Gibbs decided to run two oldish Merlo 40.7 telehandlers rather than one new machine.

This is largely due to the fact that the new models have such complex electrics, but they also farm over three sites and wanted the convenience of having one near each location. 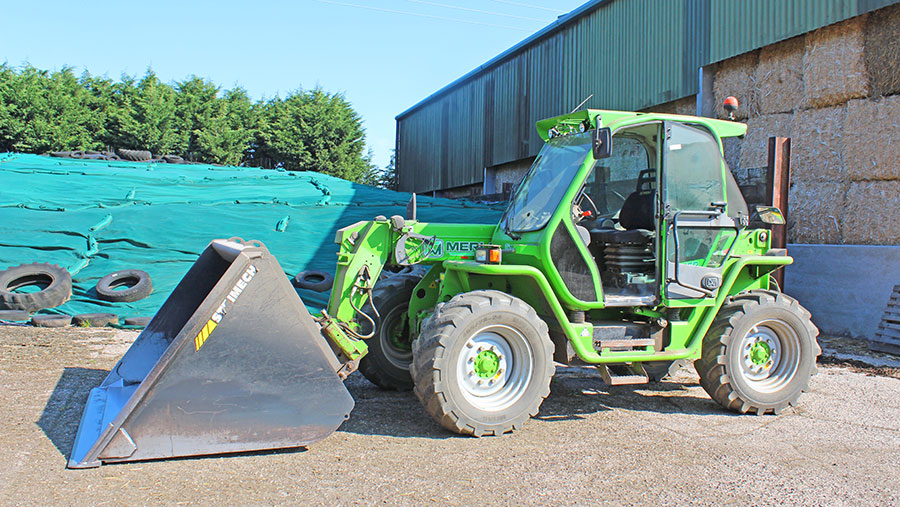 The first machine was bought new in 2013 from Pallisers of Hereford and is now on 4,900 hours. Its twin was purchased second-hand and is currently on 3,700 hours. Both have all the features they need, including cab and boom suspension, and they say lifting power is sufficient to handle a 2.2t grain bucket.

The only significant problems have been with the valve block slices, which play up from time to time and need to be replaced at a cost of £1,000. However, their independent mechanic, Steve Hodges, gets them refurbished for a fraction of that price.

Over the past few years, the brothers have managed to assemble a shed of four tidy Agrotrons, ranging from 150hp to 270hp.

All have semi-powershift transmissions, four spool valves and air brakes, and the two largest tractors are Profiline spec, meaning they get electric spools, a simple joystick and air cab suspension.

Apart from the largest X720, none have had any serious breakdowns. However, the air conditioning is known to be poor on Agrotrons from this era, so they’ve all had the system overhauled.

This included having the underseat cab fans replaced and taps fitted on the heater pipes to make sure no hot water leaks into the system and dilutes the work done by the compressor. All of the tractors have also had the exhaust manifold studs replaced with upgraded versions as the originals have a tendency to shear off.

At the moment, Phil and Martin plan to run their current Deutz fleet up to high hours and repair or recondition them as required. Most maintenance and fixes are carried out by local independent mechanic Steve Hodges and Pallisers of Hereford.

“These tractors are so much cheaper to own than a new model, and use significantly less fuel, so we can justify some fairly major repair bills before we’re out of pocket,” says Martin.

They’re also convinced that older tractors will continue to gain popularity, something that already seems to be happening in the US, says Phil. “Most manufacturers have older iconic models that I think will continue to be refurbished and run well into the future.”

The only non-Deutz tractor on the farm is a Claas Arion 650, which the brothers bought because they had received such good service from dealer Claas Western with their Lexion combine.

Here’s their current Agrotron line-up in a bit more detail. 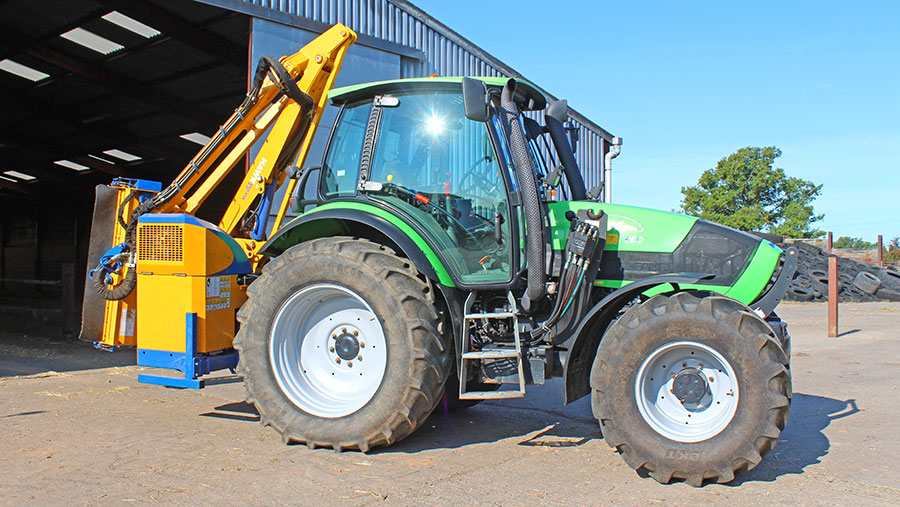 It’s fitted with a Quicke 150 loader and is the hardest-worked tractor of the lot, clocking up about 800 hours/year. As well as general handling duties, it powers a Bomford Hawk hedgecutter and a straw bedder.

It’s the only one of the farm’s Agrotrons to feature a 6-litre engine, which delivers 150hp. “It’s a powerful tractor for its size and, because it’s so compact and manoeuvrable, it gets driven a lot,” says Phil.

The only significant breakdown on this tractor was a worn main drive clutch, which was replaced last year. 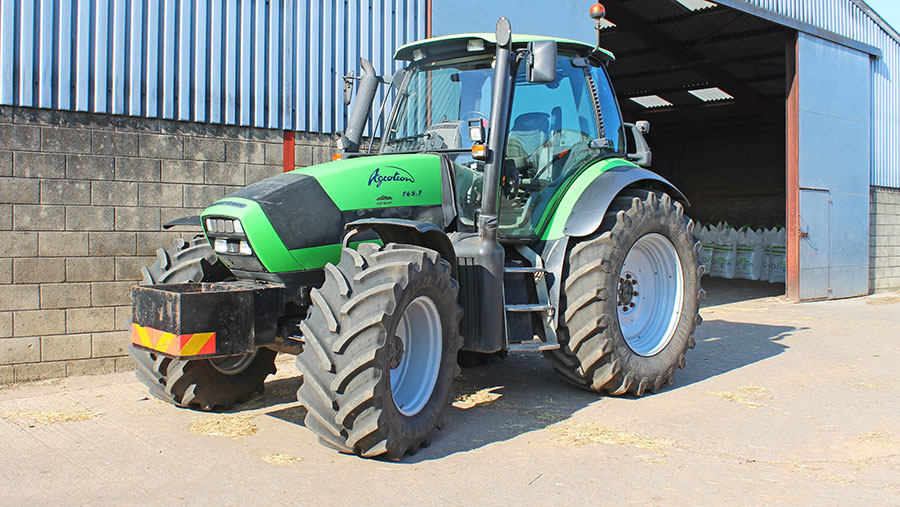 The 165.7 arrived in 2014, when it was on 1,900 hours. It was the only tractor not to come with factory-fitted air brakes, so the Gibbs got Pallisers of Hereford to retrofit a genuine system.

Thanks to the previous owner, the 7.1-litre engine was chipped from the standard 165hp to 200hp, meaning it goes at least as well as the bigger 180.

Its main tasks are haulage, fertiliser spreading, pulling one of the farm’s 7.8m Mzuri Result straw rakes and running a Keenan feeder wagon in the winter. It does about 650 hours/year. 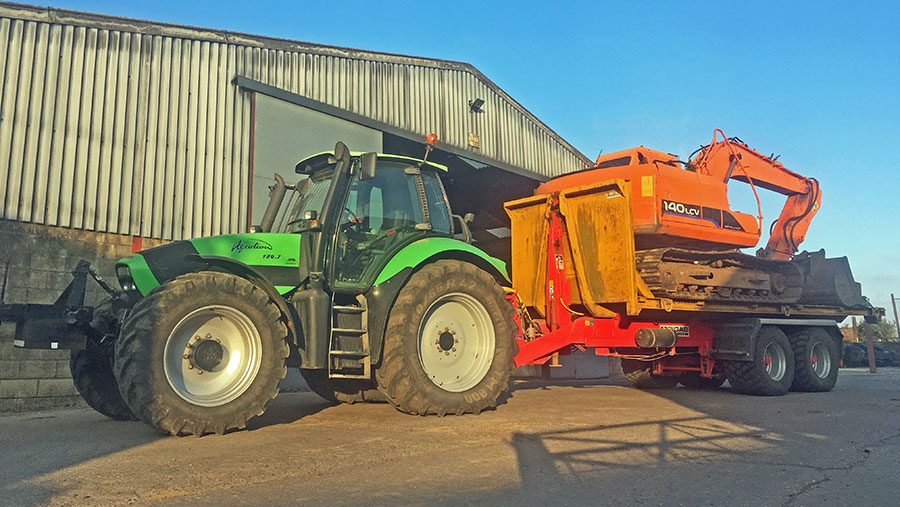 The 180.7 is the biggest of the brothers’ regular Agrotrons. Because of this, and its cab suspension, it spends most of its time on haulage and big square baling duties.

The baler in question is a 16-year-old Massey Ferguson (Hesston) 190 that has clocked up a bale count of 25,000 and is still in fine working order.

Most of the 180’s haulage work involves pulling the farm’s Bigab hooklift trailer, which has bulk bodies for grain, a flatbed for moving their 5t Hitachi and 14t Doosan excavators, and another carrying a water bowser and chemical store for supporting their contractor’s self-propelled sprayer.

The brothers bought the 180 in 2017 and it’s the highest-houred tractor they’ve purchased, sitting on 5,000 hours at the time. It’s now clocked 7,000 hours and is currently working about 450 hours/year. 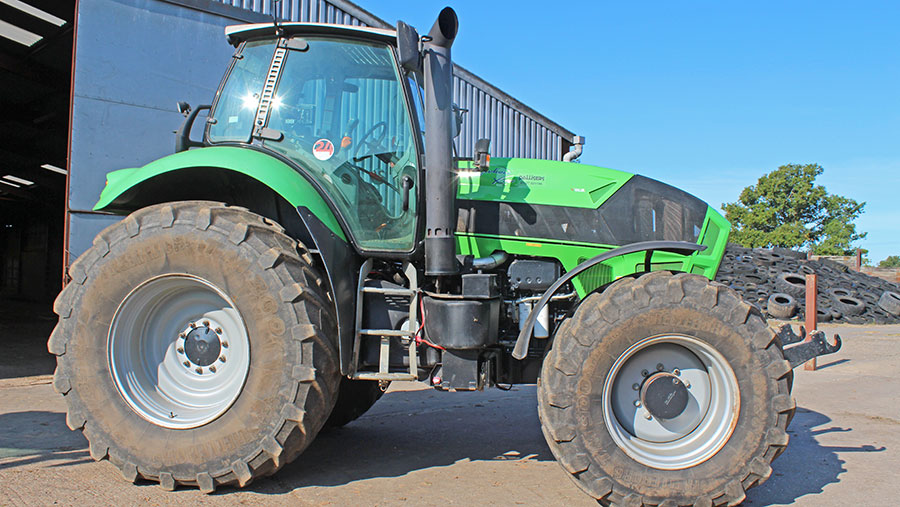 King of the Agrotron line-up is an X720 that was purchased primarily to pull the Gibbs’ 4m Claydon Hybrid drill.

“The Claydon needs to be pulled at 10-12kph to move enough soil and create the proper shattering effect,” says Martin. “On flat, easy-working ground the tractor flies along with it, but on banks and heavy ground it hasn’t got much more to give – it’s just about right.”

It also gets used for subsoiling and mole ploughing, where it puts the power down very effectively and uses surprisingly little fuel. In the summer, its 11t bulk is also put to good use for silage clamp building with a rear-mounted buck rake.

It’s the only one of the tractors to have had a significant breakdown, which was a failed powershift clutch pack earlier this year. The symptoms were a loss of drive in half the powershifts, and the tractor had to be split so it could be rebuilt.

This was done by Pallisers and the tractor was back, ready for drilling. It was a big job, so the bill ran to about £10,000. “But that’s a fraction of the value we’d lose on a new tractor in the first year alone,” says Phil.