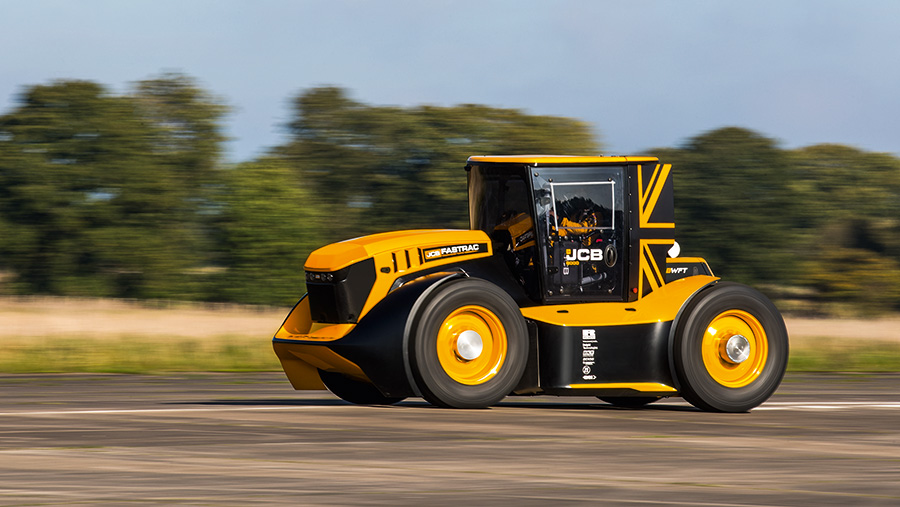 A JCB Fastrac has sailed into the Guinness World Records Book, securing the crown of the world’s fastest tractor by reaching a speed of 135.191mph.

It was the Staffordshire company’s first bid at the global title, after securing the British record with a speed of 103.6mph back in June, with both attempts taking place at Elvington Airfield in York.

Although the official speed was 135.191mph, the tractor actually hit a peak speed of 153.771mph during one run down the airfield, but as record attempts dictate, two 1km runs are required to set a record.

At the wheel of the speedy tractor was lorry mechanic and motorbike rider Guy Martin, who piloted both runs and said it was ‘proper privilege to be involved’ – but admitted he was a ‘very small cog in the machine’.

The world record holder – Fastrac Two – slightly differs from the British record Fastrac One, with the main challenges faced by the in-house design team being aerodynamics, reducing weight and upping performance.

“We used Fastrac One as a test-bed, which enabled us to move forward quite quickly and create a lighter, more streamlined tractor,” commented JCB’s Chief Innovation and Growth Officer, Tim Burnhope.

“We still managed to use over 50% of standard Fastrac parts, though tyres were an altogether different challenge. At 1.3m tall and weighing 80kg, and usually rated for 40mph, there was a lot of work to do to prevent them growing and heating up.”

Additions from Fastrac One included a parachute to aid stopping, a larger turbocharger along with water injection and charge-air cooling through ice tanks, which reduced intake temperatures by 50deg.

Only 5mpg was achieved, so the 20-litre fuel tank needed topping up pretty regularly.

The driveline had a new multi-plate wet clutch to deal with the 2,500Nm of torque and offer smoother gear changes for the six-speed manual box.