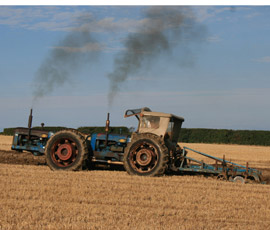 Tractors based on Fordson and Ford skid units such as County, Doe, Muir-Hill, Roadless and many other rare and famous derivatives will be ploughing 500 acres of prime Lincolnshire arable land.

Entries from tractor owners are approaching the 200 mark, say the organisers, with many more expected to turn up on the day. Tractors will be coming from England, Ireland, Scotland and Wales while many visitors will be travelling from Belgium, Germany, Holland and Norway.

The event will start at 10am. The aim is to have a field for County tractors to plough in, a field for Roadless machines, one for Doe, one for Muir-Hill and so on. Tractors will operate all day, but each marque will also perform for a specific one-hour slot on a rota.

The final event at 4pm on the Sunday will be a Speed Ploughing Challenge. One machine from each marque will compete against its rivals to plough one acre of land to a commercial standard.

The site is on the A15 midway between Lincoln and Sleaford at the staggered crossroads between the junction of the B1191 and the Welbourn Road. Cost is £6 and £4 for concessions. Further details are available from David Leech on 01526 320 797 or 07977 441 270 or leechdairyfarm@hotmail.com