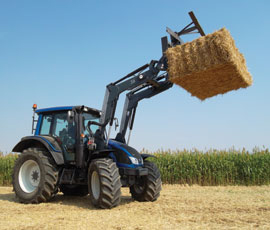 Valtra’s roots lie deep in the Finnish pine forests. That’s probably why it has developed some of the hardiest tractors on the market.

European market share in this sector is 10%, but the Finns have ambitious plans to up this to 12% over the next five years.

A fair chunk of that is likely to come from its biggest selling range – the N-series. Having first rolled off the production line in 2003, it now accounts for almost 50% of all Valtra-badged tractors.

The flagship of the series is the world’s biggest four-cylinder – the N163, but it’s at the other end the firm has been focusing recently.

There are two new tractors to challenge the ultra-competitive 100hp market, with the 88hp N82 and more popular N92 making way for the new N93 and N103.

Primarily loader tractors, Valtra hopes their dinky proportions and good visibility will make them ideal for dairy and livestock work.

Switching to a three-pot, 3.3-litre Sisu engine has helped form the tractors’ Borrower-like proportions. It is actually the same powerplant as that found in the smaller A-series, so gets similar features including electronic engine management to allow things like cruise control.

The space left by the old four-cylinder has been used to accommodate extra cooling capacity.

While larger N-series tractors rely on urea-based after treatment, there’s no need for AdBlue for the smaller tractors. Instead, they use engine gas recirculation to control emissions.

Valtra is one of the first companies to meet those boring emissions regulations with a 100hp engine, long before the rules come into force in January 2013.

The N93 and N103 are both available with Valtra’s three gear, semi-powershift box.

The more powerful N103 is also available with a new five-step transmission. In short, it is a lighter-weight version of the Versu gearbox found in higher horsepower tractors. It has 20 forward and 20 reverse gears in the four mechanical ranges.

Valtra says the main benefit of the gearbox is the speed of the powershift within each range, which is 128% faster. This should help make changes smoother.

There’s a creeper option available, too, which takes the gearing range up to 30×30.

Other features include two cruise control speeds – impressive for a tractor of this size – and Valtra’s Autotraction system. This allows you to stop the tractor by pushing the brake or lifting your toe off the throttle (when working below 12kph, anyway). When you release the brake or push the throttle the tractor will start up again.

Despite having to improve the cooling capacity of the tractor, Valtra has managed to slim down the bonnet.

Both models sport a Deutz-like droopy nose, which helps visibility to the front loader in particular. It has also helped turning circle, which is just 4.5m.

The TwinTrac reverse drive system is also available on the N103.

Full production of both tractors will begin in January 2013.

Most notably, the T163 Direct is the first Valtra tractor with a silky-smooth CVT transmission to get an eco mode.

Operators now have the choice of two different engine settings – eco and standard – depending on the type of work.

For high-speed, long-distance road work the standard mode is probably best. But in the field the high torque offering of the eco mode should be ideal.

With it engaged, max power comes at just 1,250rpm (rather than 1,700rpm). This should cut engine thirst and bark to make for a more pleasant in-cab experience.

Valtra suggests fuel consumption can be cut by up to 10% by employing this system, depending on the type of work and ground conditions. It should also improve the life of the engine.

Other more cosmetic changes have seen the cruise controls, rear pto, auto-steer and four-wheel-drive controls move to the armrest. Four new colours have been added to the options list, too. There are new shades of red, green, blue and silver, but no pink just yet…

Keep up with the latest farm machinery news