Scandinavian tractor manufacturer Valtra and sister company Sisu have been trialling and testing a prototype biogas-fuelled tractor in Sweden.

Without any significant changes to the original Sisu diesel engine, 70-80% of its power is generated by biogas. The dual-fuel engine functions like a conventional diesel engine. Compressed natural gas is injected with the intake air and combustion occurs when a small amount of diesel fuel is injected into the cylinder. If biogas is not available, the engine can run solely on diesel.

The biogas tanks are situated on the right-hand side of the chassis, in place of the cab steps. The capacity of the gas cylinders on the first test tractor is 170-litres, which is sufficient for three to four hours of work, equivalent to approximately 30-litres of diesel.

Both the diesel and gas injection systems have their own electronically controlled common rail, which allows the ratio between the diesel and biogas to be adjusted automatically according to operating temperature, engine-loading, and so on.

Valtra envisages that farms with their own biogas plants and refinement facilities will be able to produce their own fuel on-farm using slurry and other waste-streams as well as crops grown specifically for energy production. 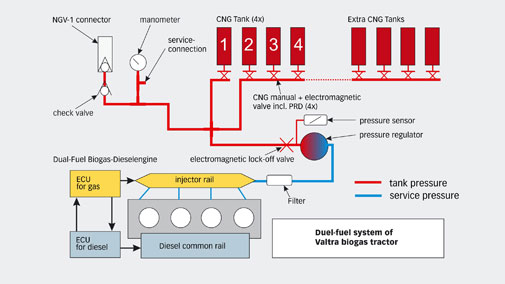 Valtra’s sister company Sisu Genpowex was involved in the project and has also developed a dual-fuel generator.

The tractor will undergo further testing in Skåne, Sweden while the dual-fuel engine will continue to be developed in Sisu’s engine lab.

Although a completely new development for the Finnish firms, it is not the first tractor of its type. Last year Case IH/Steyr revealed a prototype dual-fuel CVX 1195 machine under analysis at its St.Valentin factory Austria.

*For a more detailed graphical explanation of the dual-fuel power-plant, visit www.fwi.co.uk/machinery