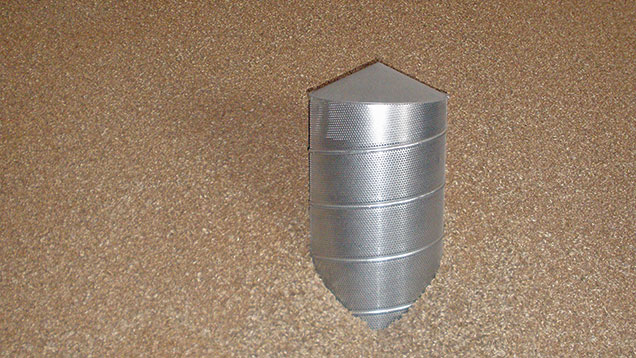 Lower installation costs and the ability to vent moist air outside the crop store are just two of the advantages of a new grain-cooling system that has some key differences from conventional designs, explains Peter Hill.

Unlike the firm’s free-standing Pile-Dry pedestals, FloorVent is a permanently installed system for new stores or buildings being converted to storage that require a new floor.

“It doesn’t require reinforced concrete channels as do traditional floor ventilation systems and most components are readily available at builders’ merchants – both of which keep installation costs down,” points out sales director Ian Clayton-Bailey

See also: Use your pension to build a new grainstore

The system does require excavation but only of a simple trench for each ventilation assembly to accommodate a solid-wall plastic pipe – typically 20cm (8in) diameter OsmaDrain – with upright elbow sections at each end that bring it to the surface.

One end emerges beyond the grain walling ready to take a ventilation fan; the other comes to the surface at a Clark-Drain manhole frame recessed into the concrete floor.

“We supply a steel adapter plate to connect a 12in diameter heavy gauge perforated steel tube to the manhole frame,” explains Mr Clayton-Bailey. “When the store is empty, the ventilating tubes are simply replaced by a manhole cover, leaving the floor level and available for alternative uses.”

The near-1m tall FloorVent tubes are equivalent to the larger of Lishman’s two Pile-Dry self-supporting ventilators, so airflow performance is well documented.

Instead of having a solid tube on top protruding through the surface of the crop for a suction fan to be placed on top, the FloorVent tube is connected to the underfloor pipe that exits outside the building where the fan is connected.

“Being less than a metre tall and buried deep in the pile means there is less risk of the tubes being dislodged or damaged when grain is being pushed up or levelled,” he adds.

Another key advantage of the system, he emphasises, is that air drawn through the crop is exhausted outside the building straight to the atmosphere, not into the roof space

That’s in contrast to other systems where air is pushed through the crop from a central air passage via floor channels – or drawn through free-standing pedestals.

“Cool air is drawn into the building through louvre panels, usually positioned in the gable ends, and then passes through the crop, warming up as it does so,” Mr Clayton-Bailey explains. “Because this warm, moist air is exhausted outside the building, there is no risk of condensation forming on the surface of the bulk or on the inside of the roof.”

As with the Pile-Dry pedestals, the FloorVent system can be used for ambient drying of grain when conditions allow – although not linseed or oilseed rape, which requires high airflows.

Drying performance is also dependent on the size and number of fans used, plus an effective fan control system and favourable ambient conditions.

For Charles White at JW Installations, the comparative ease of putting in the system is an attraction, with the proven abilities of pedestal cooling a definite confidence booster.

“The biggest FloorVent system we’ve put in so far is for a 12,000t wheat store and we are currently working on another for a 14,000t storage building,” he says.

“The civil engineering aspect is a cost-saver because casting laterals into the floor means the contractor is limited as to how much concrete he can lay in one go.

“With the FloorVent system, after the pipes and manhole frames have been put in, the concrete can be laid in large sections, which is obviously more cost-efficient for the contractor and also the customer,” he points out.

Performance-wise, the new system simply does the job, cooling grain very quickly and providing the ability for the store manager – or Lishman’s Barn Owl monitoring and management system – to tackle local hot spots using just one ventilation tube rather than wasting energy by blowing air through an entire lateral.

To avoid damaging the ventilation tubes when out-loading the store, Mr White reckons it is sensible to identify their location: “Marker poles are available but one of our clients plans to get a line-painting company to run marker lines through the manhole covers from one end of the store to the other,” he says.

“Paint markings on the grain walling would also be helpful.”

Where two rows of ventilation tubes are needed to achieve sufficient airflow for the storage depth and width, the individual underfloor pipes are laid alongside each other to exit as a pair side-by-side for easy fan change-over but with an angle in the longest pipe ensuring the ventilation tubes are positioned in line.

“The system has been shown to work well with the perforated tubes located up to 12m away from the fans in crop piled 12m deep,” says Ian Clayton-Bailey. “You wouldn’t want to go beyond 24m, but different combinations of grain depth and underfloor pipe length would give similar results.”