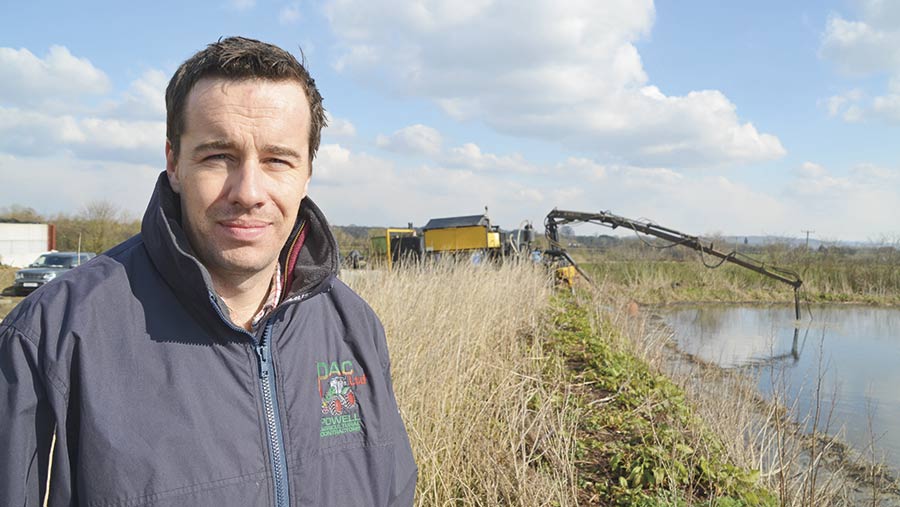 Umbilical slurry spreading is definitely a Marmite job – some people just can’t get enough of it, while for many it’s something to steer well clear of.

The traditional set-up of one tractor dragging the hose and doing the spreading plus another running the pump works fine so long as you can find someone that’s happy to sit stationary for hours on end and act as nurse-maid at the lagoon.

But it’s a system that’s intrinsically inefficient – that person at the pump spends 80% of their time browsing Facebook or reading a dog-eared back issue of Farmers Weekly.

Standalone remote-controlled pumpsets have the potential to cut out that extra member of staff but they haven’t always had the best reputation because radio signal are not always that dependable. As a result, two people often have to be on hand to make them work reliably.

Wiltshire contractor Gareth Powell has plenty of experience of the trials and tribulations of just such set-ups but believes he has now found a much better solution.

Having set out his stall as a slurry specialist a decade ago, he ran a conventional two-man, two-tractor umbilical rig for three years, starting out with simple splash-plate applicators and quickly moving to injectors, having recognised a niche in his local area.

But, by 2011, he had had enough of the inefficiencies of such a set-up and started looking at ways of improving the job.

“Finding staff who were happy just to sit on the pump tractor day-in, day-out was understandably difficult and I just didn’t like the inefficiency,” explains Mr Powell.

“So I decided I needed to take the plunge and invest in a remote-controlled pumpset. I bought a Jackson unit with Doda pump and 150hp FPT engine.

“The concept was brilliant when it was working but it was dogged with radio signal issues when there were trees or any sort of hill in the way. Determined that I would stick with it as a one-man job, inevitably I would end up running backwards and forwards from the lagoon to sort out any trouble.”

But convinced it was the way forward he persisted and, as demand for his services grew, he invested in a larger Jackson set-up, this time with a Cri-Man pump taking outputs to over 150cu m/hour.

Although it certainly increased throughputs, it didn’t solve the radio signal issue and, lacking proper oil cooling, the pump had a tendency to overheat. It was eventually swapped back to another Doda unit.

Over this time, as capacity had grown, Mr Powell had upgraded his applicators accordingly, switching from a 4m Duport injector to a 6m unit and then to a 9m.

“We had the capacity but I still felt we hadn’t got the perfect pump set-up. Back in 2012, I’d seen something at the Grassland event that I thought might be the answer.

“To overcome the issue of radio signal reliability, Wox Agri’s remote-controlled pumpset employs an internet-based modem working on the mobile phone network to communicate. On top of that, it has a much bigger 350hp engine, higher capacity Cornell pump and clever intake arrangement.

“I got talking to the contractor who had bought the first Wox rig and, in just three months, he had done double the amount of work that I had. That focused my mind and I knew that was the route I needed to go down.

“But, of course, that wasn’t comparing like for like. Aside from the extra power and additional pump capacity, it comes on its own trailer with a Pit Pal intake pump and a Hiab crane. But when I did the figures, it made sense – if it could deliver as expected, the expense could be justified.”

So he placed an order for a bespoke built unit with Wox, which arrived in August 2015. Since then, it’s been put to work almost constantly, having clocked some 3,000 hours.

And its output hasn’t disappointed. Where previously the Jackson pumpset was averaging 120-140cu m/hour, the Wox set-up comfortably deals with 250-300cu m/hour.

Even when shifting slurry big distances – over 3km – and uphill, the new rig doesn’t struggle, managing to maintain a minimum of 155cu m/hour on even the longest runs, helped in part by using 178mm (7in) pipes.

Lowered into the lagoon by the crane, the Pit Pal lift pump is also reckoned to contribute significantly to the rig’s output.

A hydraulically-powered turbine/impeller unit, it primes the 150mm (6in) hose running up to the main pump, maintaining a constant flow and allowing the bigger unit to concentrate all its efforts on propelling slurry along the supply lines to the spreading tractor. 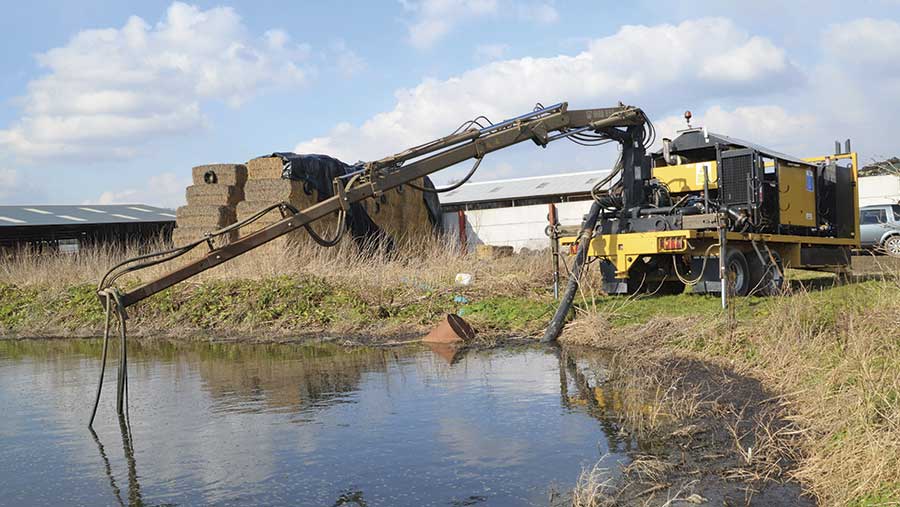 The crane lifts the pump into the lagoon. The pump then propels slurry out along the umbilical pipework © Nick Fone

But the Pit Pal provides another less obvious bonus. It is surrounded by a cage that keeps it from making contact with the lagoon lining.

In addition, being carried by the Hiab, it can be hoisted 0.5m off the bottom to ensure it’s only drawing clean slurry, minimising the risk of damage to either it or the main pump from foreign obstacles.

Mechanically, the Wox set-up has one simple but very significant advantage – a hydraulically-operated clutch pack coupling the engine to the pump.

Where previously Mr Powell had to leave the pump running, diverting slurry back the lagoon when changing fields, now he just remotely disengages the clutch. And if excessive back pressure is detected in the lines, it will cut out automatically to avoid blowing hoses.

It’s how the rig is controlled that’s really clever. An app on Mr Powell’s smartphone displays an image of the control panel on the side of the pumpset.

By pushing any of the “virtual” buttons, he can activate, deactivate or adjust all the functions that he can tweak when standing right next to it. Not only does this make for really easy operation from the field but it also brings other hidden benefits.

“The telematics package is just brilliant – on cold mornings, I can set the engine running from my kitchen to get everything warmed up for when I arrive on site.

“I can control everything on the rig remotely except the lights. One of the best features is that it includes the on-board compressor and the associated control valves.

“That means when I’ve finished a field, I can set it to blow out the lines without getting off the seat of the tractor. It’s a massive time-saver and it’s got enough blow that I don’t even need to use a sponge.” 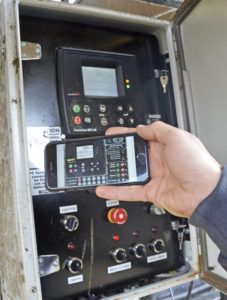 Always with an eye on ways to improve the operation, a year down the line with the new pumpset, Mr Powell spotted something on the internet that had the potential to massively boost the efficiency of the spreading operation.

With a conventional umbilical rig, you’re generally restricted to working fields diagonally from corner to corner with the result that you’re effectively always running into short work and turns involve a complicated series of manoeuvres to set the hose right for the next run.

To tackle this issue, Dutch firm Schouten has developed a system that allows the spreading tractor to run up and back the length of the field in the way you would for any other fieldwork. More critically, it can also turn tight back on its previous pass without shunts or short work.

The basis of the set-up is a linkage-mounted ladder-frame that can carry any sort of applicator on a four-point linkage and can hoist it high enough to clear the drag hose. Underneath is a telescopic swinging-arm coupler that connects with the hose.

In addition, there’s a slurry-holding tank integrated into the front-mounted hose reeler that acts as a buffer for turns so that liquid flow can be shut off to avoid pooling and over application on the headlands.

So as the tractor approaches the end of its bout, the flow of slurry is diverted into the holding tank, the arm extends and the frame lifts the injector or dribble bar clear of the hose. By setting the pivot point well back from the rear wheels, the tractor can then turn back on itself without fear of running on the pipework. 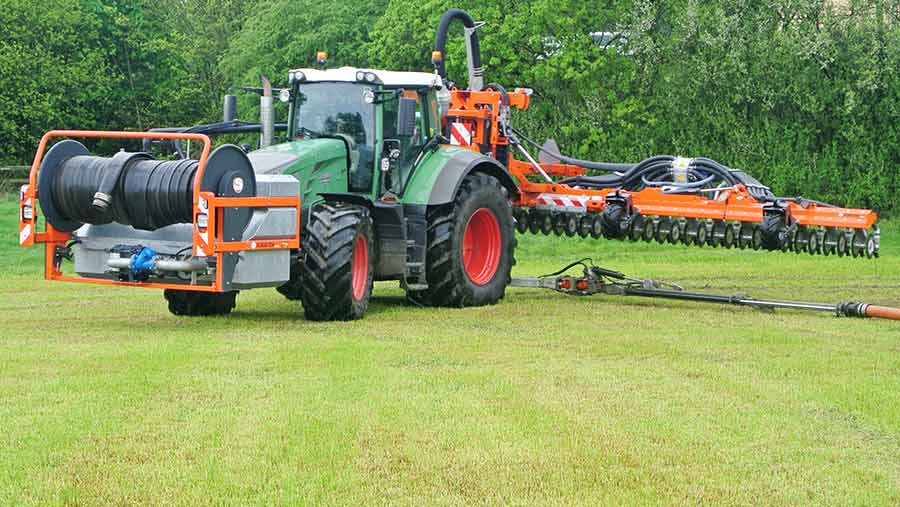 Once back into work, the slurry is then set to flow down the applicator pipes once more and a lobe-pump on the reeler pumps what has accumulated in the tank back to the spreading set-up.

Convinced that this approach could significantly improve the efficiency of his time in the field, Mr Powell ordered the Schouten system along with a huge 12m injector. 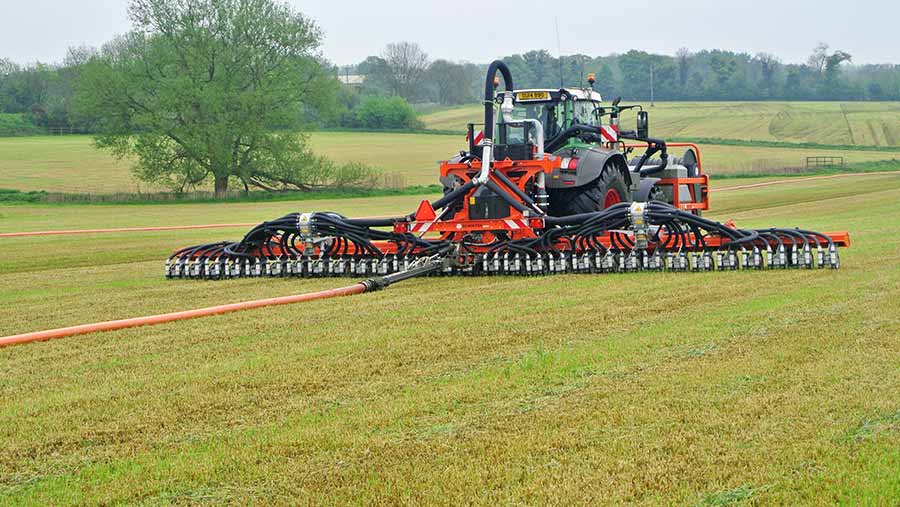 Is it a true one-man rig?

“For 70% of the time, I’ve been running the whole set-up solo without any dramas. But, in the spring, it makes sense to run a second man and tractor as we’re so busy and always chasing the daylight.

“With one tractor, it’s a two-trip job to move the pump, reelers and injector or dribble bar. With two, we’re there in one trip and the second person is then setting out the pipework for the next field so that I can just get straight on and never stop spreading. For the relative extra cost, it makes the whole job a lot more efficient.”

And that efficiency plays out in all areas with the new rig. Fuel use stands at an average to date of 0.16 litres/cu m – a saving of 30% over the previous smaller set-up.

“The change to the Wox pump and the Schouten applicator has revolutionised my job. It seems crazy to say it but because it’s doubled my output and I can achieve that single-handedly, you’d have to run four men and four tractors to match that with a standard umbilical set-up.”