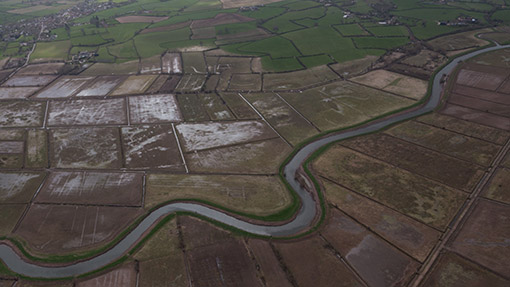 Church leaders have published a report into last winter’s Somerset floods and made recommendations on how to respond to future flooding incidents.

Fact, Feeling and Future provides a snapshot of the effects and implications of the flooding for Somerset residents.

The report, based on first-hand accounts of people affected by flooding, including farmers, was published on Monday (18 August).

It includes 20 recommendations to inform future national and local policy and planning in the event of similar flooding episodes in the future.

Key recommendations include plans for a major emergency flood fund, support for river widening and dredging, and more lobbying for government help.

The report says the key industry of agriculture has been “decimated” by the floods.

One section says: “Arable land underwater for more than a few weeks in winter becomes compressed, losing aeration. This results in death not only of crop plants and detrimental effects on grass, but also of the soil organisms.

“Nutrients are leached beyond the reach of grass and crop roots. Farmers are now faced with compacted, polluted and denuded land.

“They have lost autumn-sown crops and need to reseed, but first the ground must be restructured, cleaned and fertilised, and given time.”

According to the report, 12 livestock farmers had to be completely evacuated and more than 1,000 cattle and 250 sheep rehoused – often across several other locations, and in the midst of calving and lambing.

The Environment Agency estimated that 244 agricultural holdings had infrastructure problems, the report states.

“Lambing yields are reportedly down to an average of 1.5 lambs a ewe, which has marked effects on profit and commercial viability for these enterprises, which are critical parts of the national infrastructure and vital collectively to Britain’s food security.”

At the moment many livestock farmers can’t turn animals out on to pasture as there is no grass or the ground is too wet.

“Their fodder and bedding stocks are used up and they face major difficulties in growing fodder for next year,” the report warns.

Meanwhile, many animals have been sold for slaughter at “less than ideal weights, resulting in poor returns on investment”.

The report criticises the government’s response to the floods, saying help is “mired in red tape and delays”.

But donations of fodder from the wider farming community were “gratefully received”.

The report warns that the future is bleak for many affected farmers. For some, the prospects are “unimaginable” and they fear their businesses will flounder this winter.

“For those who had to sell their herd and have no prospect of growing decent pasture this year, their whole life’s purpose and joy of their work is reckoned to be very uncertain and fragile,” adds the report.

“There is a risk to orchards’ viability, with trees struggling to survive at the very time they are due in blossom. How and whether businesses and relationships survive remains to be seen.”