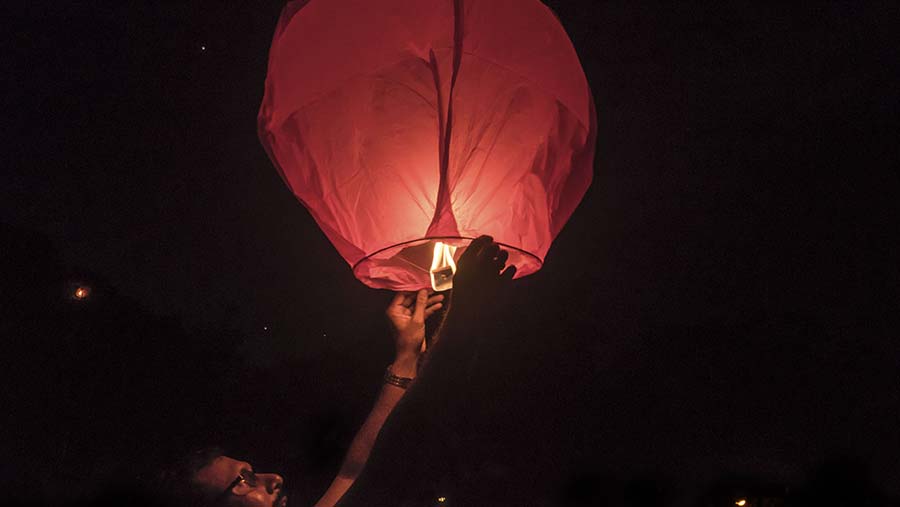 Farmers have reacted angrily to a new initiative encouraging people to release sky lanterns every Sunday night as a way of showing support for the NHS during the coronavirus pandemic.

The company selling the lanterns, Night Sky Lanterns, says money made will be donated to the NHS – but farmers have raised concerns at the damage the lanterns can cause to livestock and crops.

Thank you for your support ??
United together to enlighten the sky with Union-Jack lanternshttps://t.co/9zhiXFdyJL pic.twitter.com/moskGrIt1q

While saying they support the sentiment behind the campaign, farmers responded to a tweet from the company to explain the devastating impact the lanterns can have.

Andy Guy, the NFU’s county adviser for Nottinghamshire, pleaded with people not to release the lanterns, explaining that they can cause injury or death to livestock, and start fires.

He told Farmers Weekly: “We’ve been fighting this battle [against sky lanterns] for years. I can’t see a single good aspect to them, to be honest.

“The countryside is pretty dry – anyone with straw or hay out will be nervous.

“Not for one moment would I want to stop people celebrating and applauding the NHS – people have been lighting up buildings blue, making donations and clapping. All of those are excellent.”

Amateur jockey Rosie Margarson said it was irresponsible for people to release the lanterns, with horses and livestock out in fields across the country.

She told Farmers Weekly: “I’ve heard too many times from various horse owners – horses have died from their injuries or been so traumatised afterwards they can’t have the normal life they once did.”

In one incident a lantern fell on to a horse wearing a blanket which then caught fire.

Fay Jones, MP for Brecon and Radnorshire, said the lanterns were a “menace to rural areas”.

These lanterns are a menace to rural areas – they start fires, pose a huge threat to livestock and litter the countryside. Please don't use them. https://t.co/zNquUqgLW5

Night Sky Lanterns said its Union Jack Sky Lantern was eco-friendly, asbestos free, and had no wire or metal parts.

The National Fire Chiefs Council (NFCC) said the campaign encouraging the public to light sky lanterns in a show of solidarity for NHS workers was “misguided”.

It said the lanterns were a fire hazard that posed a threat to farmers’ livestock and fields, and their use should be highly discouraged at a time when wildfires were more likely because of the weather conditions.

NFCC chair Roy Wilsher said: “While I fully understand people wanting to show their support to the NHS, I would encourage people to find a different way to do this.

“All emergency services are currently under unprecedented pressure due to Covid-19, and I am concerned this type of activity could not only put additional pressure on the fire service, but further strain on the NHS.”

The Country Land and Business Association (CLA) echoed those concerns.

CLA president Mark Bridgeman said: “There is simply no responsible way to use them. They can kill animals, litter the countryside and start fires, especially as the moorland is extremely dry at the moment which could spark another national emergency.

“Releasing a naked flame, with absolutely no control over where it will land, is a serious threat to rural businesses, livestock, wildlife and the environment.”