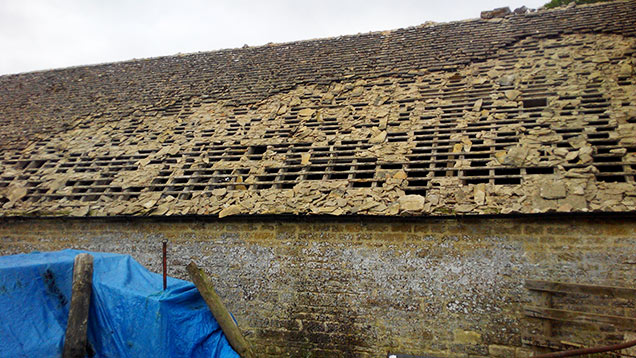 A Cotswold farmer has been left with a £50,000 repair bill after thieves stole the stone roof from his property twice in three weeks.

The farmer, who asked not to be named, said the initial theft stripped a traditional Cotswold roof from the front and back of a stable block, about 300m from his house.

Once the new stone had been fixed, he took steps to prevent any further attempts by moving a heavy-duty roller in front of the farmyard gate and adding a heavy-duty chain.

But the thieves returned three weeks later, moved the roller aside and cut through the chains.

On this occasion they only removed the slate from the back of the stables, but they also stole a trailer worth £3,000 and 120gal of red diesel. The cost of repair is estimated at £50,000.

The crime prompted a warning from rural insurers that thefts of stone from houses, buildings and walls was rising.

Kevin Thomas, principal risk management surveyor at Ecclesiastical Insurance, said: “The theft of stone is an increasing phenomenon, in both rural and urban areas.

Stone flooring has been en vogue for a while now. But as demand for stone increases, so have quarrying costs, pushing up the price, Mr Thomas explained.

He warned that those with valuable stone on their property, such as Yorkshire Stone or Cotswold Stone, were particularly at risk.

The insurer also issued a plea to people who were buying stone to make sure they were not receiving stolen goods and unknowingly contributing to a black market.

Mr Thomas urged individuals to adhere to a five-step checklist to ensure they were not buying stolen stone.

1. Check that your builder is reputable. Ideally a builder who is a member of the Federation of Master Builders or The National Federation of Roofing Contractors – ask to see examples of their previous work and receive testimonials from previous clients.

2. Ask where your stone has come from – your builder should be able to tell you where they have sourced the stone from.

3. You should expect to see the stone delivered on a pallet or wrapped; if not ask to see proof of purchase or a receipt.

4. Ensure the supplier is legitimate and check where the stone was mined.