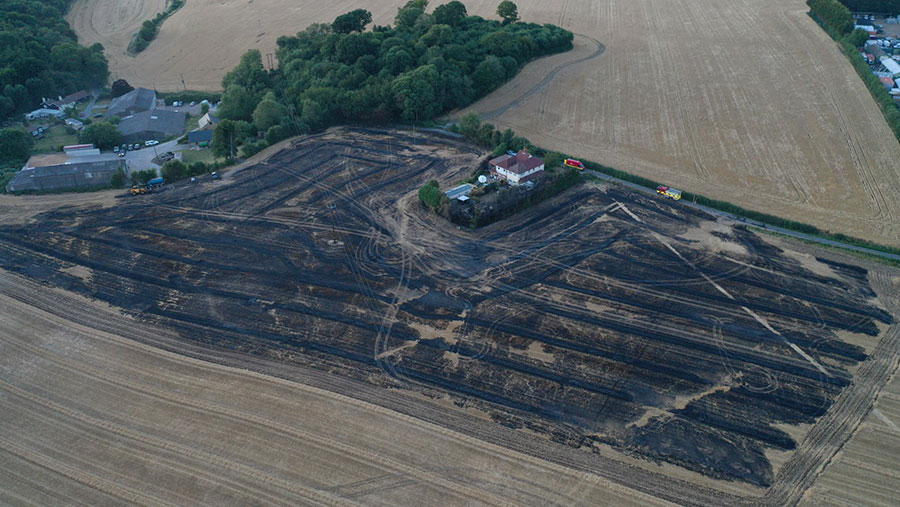 Farmers are on high alert after a spate of fires that ripped through fields and destroyed buildings and trailers during the busy harvest period.

In Berkshire, a large blaze broke out at Berkyn Manor Farm in the early hours of Monday morning (3 August).

Farmer Colin Rayner said he suspected it was arson, after the fire destroyed two straw trailers and two grain trailers.

He told Farmers Weekly: “The straw was only bailed yesterday, dry as a bone and has not had time to heat up. Two of the trailers were parked 10m apart.”

Mr Rayner thanked Royal Berkshire Fire and Rescue Service for preventing the fire from spreading to nearby farm buildings, a house, petrol tank, and combine header – which is vital and irreplaceable at this time of year. Thames Valley Police are investigating. 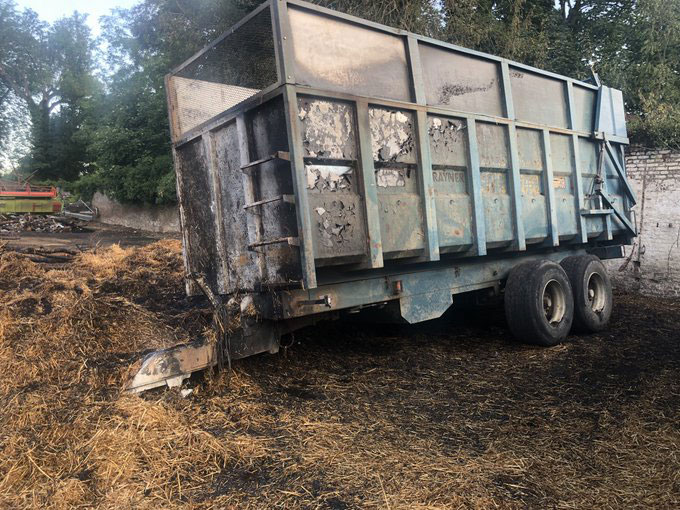 Firefighters were helped by the farm’s fire manual, which told them where petrol and chemical stores were located, how to open security gates to gain access and who to call.

Heathrow Airport control tower first spotted the inferno and raised the alarm with the police, while neighbours alerted farmworkers living on site after hearing tyres exploding.

Mr Rayner’s cousins, Alan and John, worked with the fire service to extinguish the flames from about 1.30am. 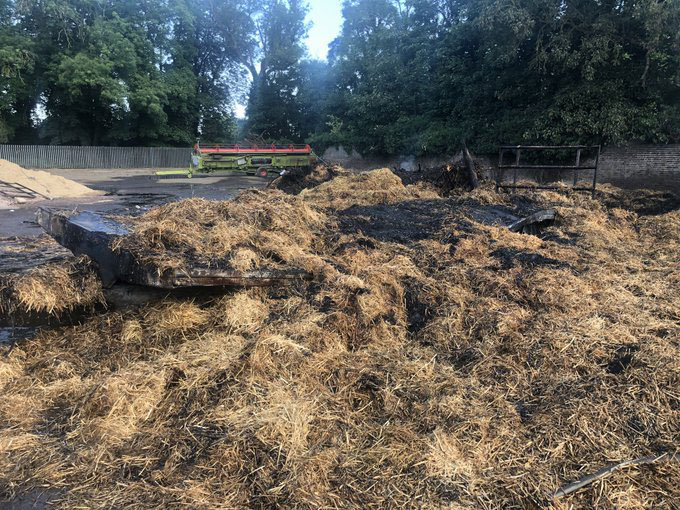 “They worked tirelessly. We are all still in shock – the thought of someone coming on to the farm late at night to wander about and do this,” said Mr Rayner.

In neighbouring Hampshire, a blaze ripped through a barn at Waterview Farm, Colden Common, near Winchester, on Thursday 30 July.

More than £3,000 worth of organic hay, along with agricultural machinery valued at more than £50,000, were destroyed. Police are investigating the fire as arson, the Andover Advertiser reported.

Kent Fire and Rescue Service was called to Lamberhurst to extinguish a grass and hay bale fire on Sunday afternoon (2 August).

Three fire engines and a bulk water carrier attended. There were no reported injuries and the blaze is not being treated as suspicious.

On 30 July, firefighters responded to a large fire in a cut corn field in Ham Lane, Gillingham.

At the height of the blaze, 10 fire engines and a bulk water carrier were at the scene, and crews wearing breathing apparatus extinguished the flames and prevented further fire spread. There were no reported casualties and the cause is unknown.

The field is owned by Kevin Attwood of Gibraltar Farm.

Neighbouring farmer Glenda Crumpton, Mr Attwood’s cousin, said it was lucky the fire did not spread to her spring barley crop.

“Luckily they had finished harvesting and [it was] just stubble. The people in the house have lost their cabins and gardens.”

Ms Crumpton questioned whether footpaths that cross farmland should be closed during harvest, to help reduce risk at such an important time.

“It is so dangerous, as highlighted with the property in the fire losing their cabin and garden. We should be allowed to temporary close the paths at these vulnerable times. It is such a worry. We are on tenterhooks.”