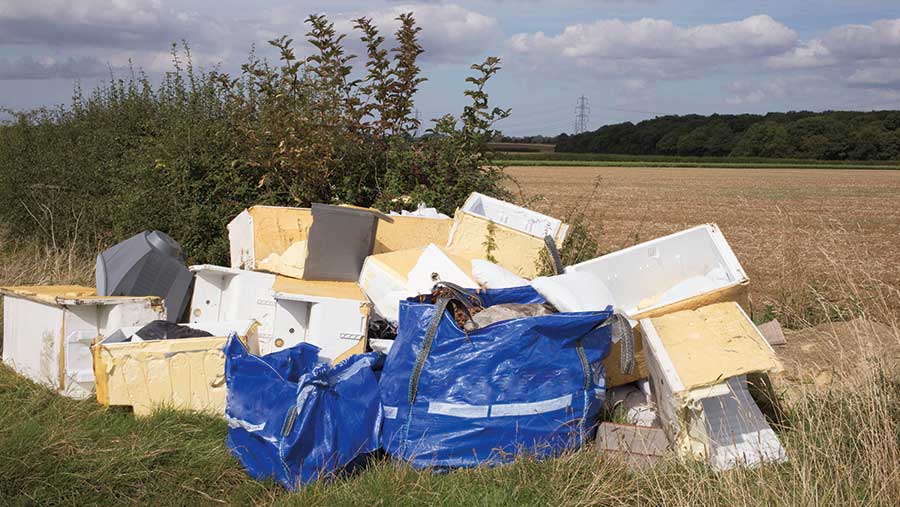 With amenity tips closed, and some rubbish collection services disrupted during the coronavirus lockdown there has been a sharp increase in the amount of garden, household and commercial waste being dumped in rural areas.

At a time when farmers are busting a gut to help feed the nation, it is simply unacceptable that their fields, hedgerows and gateways are seen by some as a legitimate depository for redundant fridges, washing machines and mattresses.

Not only is such activity illegal, it is also costly to the farmer, who has to pay for their removal an it can present a serious risk to livestock and the environment – for which the landowner may ultimately be liable.

Farmers Weekly has said in the past that more effort is needed to catch the perpetrators, with tougher sentences dished out to act as a proper deterrent.

True, the government has strengthened local authorities’ enforcement powers through fixed-penalty notices and by making it easier for vehicles to be stopped, searched and seized.

But when it comes to actual convictions, only one in 600 fly-tipping incidents leads to a prosecution, while the most common punishment is a penalty of less than £400, compared with an average clean-up cost to the farmer of £800.

Clearly, tougher sentencing is still badly needed, while the Country Land and Business Association’s idea of a ticketing system, to allow landowners to remove dumped waste and take it to a local tip for free, needs urgent consideration.

Farmers must play their part too, working together to resist the scourge of fly-tipping. Hidden cameras near fly-tipping hotspots, for example, have been shown to work.

It is also essential to report all cases, either direct to local councils and the police, or using a dedicated service such as the NFU’s Rural Crime Reporting Line, FlyMapper or the Dumb Dumpers website in Scotland.

Either way, the blight of fly-tipping during lockdown needs addressing.

For, while the weekly round of applause for NHS workers is one of the more positive images to emerge from the coronavirus crisis, the growing piles of rubbish building up in the countryside is undoubtedly one of the worst.