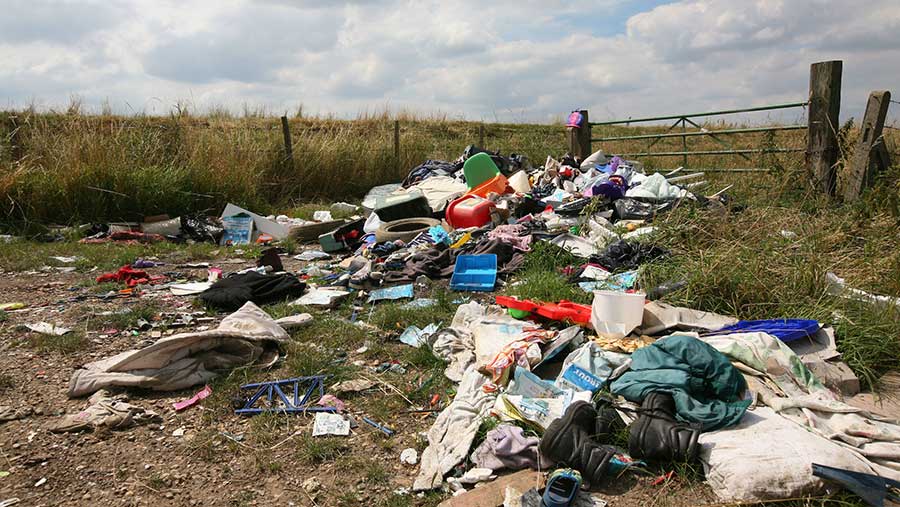 The government’s new litter strategy is “a missed opportunity” to tackle the £50m rural scourge of fly-tipping as an environmental crime, the NFU has said.

Defra secretary Andrea Leadsom unveiled the government’s first Litter Strategy for England on 10 April. It includes proposals to fine litter louts £150 and issue penalty notices to vehicle owners when it can be proved litter was thrown from their car.

It also contains plans to force fly-tippers to clean up their own waste and councils banned from charging residents to dispose of DIY household waste at the tip.

NFU deputy president Minette Batters welcomed the proposals but said the law courts needed to use their sentencing powers to deliver tougher penalties to fly-tippers.

Under current laws, serious offences of fly-tipping are punishable by an unlimited fine or up to five years in prison. But the NFU says magistrates are not using their full sentencing powers to punish fly-tippers appropriately.

“The proposal to force fly-tippers to clean up their own rubbish is a step in the right direction… but this would rely on the perpetrators being caught first,” said Mrs Batters.

“This is a fundamental problem because the NFU does not believe that existing powers for enforcement are being fully utilised.

“Magistrates need to make full use of their sentencing powers and provide a real deterrent against fly-tipping.”

Mrs Batters urged local authorities to consider whether household waste recycling centres and other recycling centres could be adapted to accept waste and recycling from local traders of small business “at an affordable cost to the user”.

She added: “Fly-tipping is a serious issue that many farmers deal with on a daily basis. It is a massive inconvenience and costs them thousands of pounds to rid their land of rubbish dumped by criminals.

“Only with the collaboration of all parties – local authorities, police, landowners and the Environment Agency – working together can we fully clean up on fly-tipping and protect the countryside.”

The Countryside Alliance (CA) welcomed the proposals, but said further measures were needed to encourage people to dispose of waste legally.

CA head of policy Sarah Lee said: “For far too long the blight of litter and fly-tipping has been scarring our countryside, harming our wildlife and costing the taxpayer hundreds of millions of pounds. It is time it stopped.

“These tough new measures will go some way to tackling this problem. However, more needs to be done to incentivise people to dispose of their rubbish appropriately.”

The Tenant Farmers’ Association (TFA) is concerned that an increasing numbers of its members are becoming victims of fly-tipping.

Incidents range from small-scale household or industrial waste being dumped on land to large scale scams that are leaving members tens of thousands of pounds out of pocket in removal costs.

Members are advised to be vigilant of scammers posing as council officials who may be looking to dump waste on their holdings.

“If you are taking in waste you should ensure that the correct licences have been obtained from the Environment Agency, it is being carried by a registered waste carrier and legitimate paperwork is provided,” said the TFA in a statement.

The TFA said victims of larger scale fly-tipping should check whether they have insurance cover as well as report the incident to police on 101 and the Environment Agency.