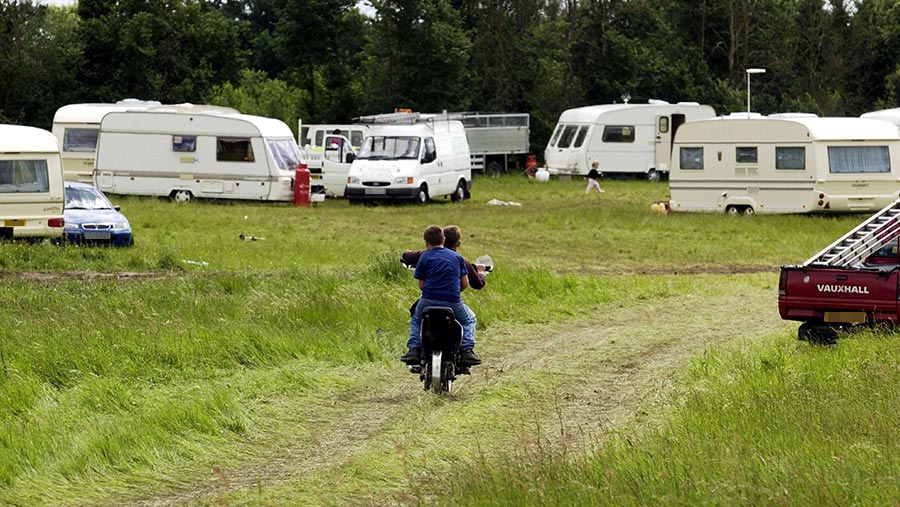 The government is launching a consultation on proposals giving police new powers to combat travellers who set up unauthorised encampments on farmland.

Currently, such trespassing is defined in law as a civil matter. But a Home Office consultation starting today (5 November) could lead to it becoming a criminal offence.

Under the proposals, police would be given powers to arrest and seize the property and vehicles of trespassers who set up an unauthorised encampment.

Home secretary Priti Patel said: “Unauthorised encampments can cause misery to those who live nearby, with reports of damage to property, noise, abuse and littering.

“The public want their communities protected and for the police to crack down on trespassers.

“Our proposals aim to ensure these encampments can be challenged and removed as quickly as possible.”

The move follows a Home Office review into how trespassing while setting up an unauthorised encampment could be made a criminal offence in England and Wales.

The Home Office wants to broaden the categories of criminal trespass to cover those who enter on to any land without permission of the occupier with the intention to reside.

Further proposed amendments to the law include:

The government said it was clear from responses to an earlier consultation in April 2018 that unauthorised encampments caused problems for communities and businesses.

Councils had since been reminded of their obligation to provide enough sites for travellers to stay short-term and prevent problems from being shifted to neighbouring areas, it said.

The Friends, Families and Travellers organisation, which campaigns on behalf of travellers, said it completely opposed the consultation.

“The proposals would have a devastating impact on gypsy and traveller communities, who face some of the greatest inequalities of any group in England and Wales,” it said.

The home secretary’s assertions that unauthorised encampments “cause misery to those who live nearby” focused on the behaviour of a minority, yet tarred all gypsies and travellers with the same brush, it added.

“This is dangerous and discriminatory rhetoric.

“If property damage, noise, abuse and littering truly are the Home Office’s concerns, we know that there already exists reams of criminal law to prevent and punish this.

“It is no coincidence that this announcement comes in the wake of a general election.

“If there was a real appetite to address the issue of unauthorised encampments, the government would have invested in site provision.

“Yet, for more than a decade we have seen little to no progress in this area.

“Criminalising families who have no place to go is inhumane and wrong.”