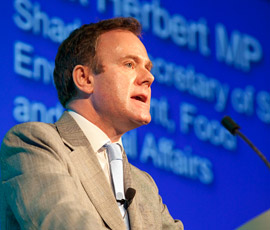 The government is creating a national crime database to help rural police forces share information and catch criminals across counties.

But while the database would help officers stay more informed to tackle rural crime, Mr Herbert said it was also up to people in farming communities to help police by securing their property more securely and remaining vigilant.

“We will fight rural crime successfully if we do it through partnership,” he told delegates.

“It shouldn’t be controversial to say the police can’t fight crime alone and that’s no more so then in rural areas.

“We are entitled to ensure the police are taking notice of us, but we have to be responsible.”

Mr Herbert said the government was also concerned about property being invaded by poachers and travellers and assured farmers it was looking at strengthening the Localism Bill to give police more powers to deal with trespassers.

He said farmers had to become better at protecting their property through things like gates, fences, padlocks and security lights, but said police also had to get a better understanding of how rural criminals operate.

“Thieves are thinking about the business opportunities available to them,” he said. “We need to understand rural crime rings and who makes them up.

“We also need to better understand the damage they do to the community.

“Violent crimes take place in cities but often the machinations of it involve a crime in the countryside,” he added.

“Guns and cars are stolen from farms and used urban areas. We need to be taking rural crime very seriously.

“All police have a role to play in policing rural communities, not just those working rural beats.”

Crime rings across the UK with a rural link: