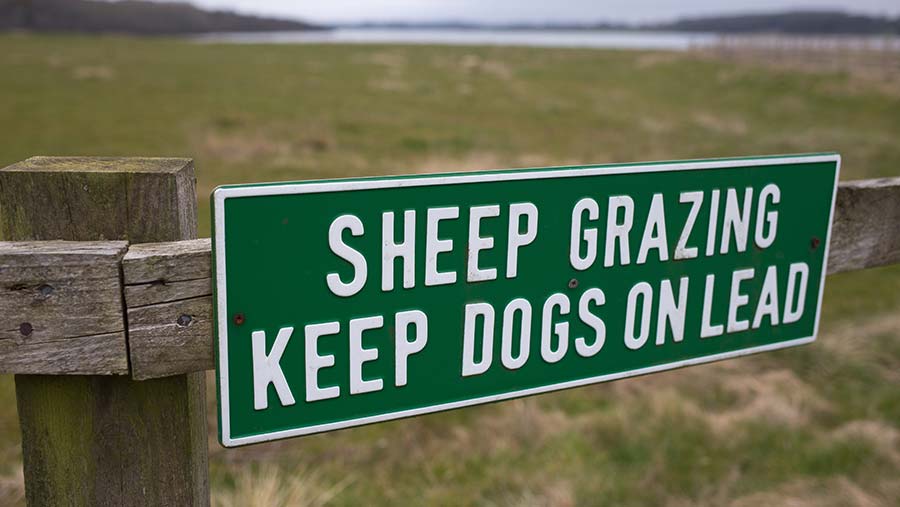 Scotland’s first minister Nicola Sturgeon has promised to promote and enforce the tougher penalties that now apply for sheep worrying in Scotland.

The Protection of Livestock (Amendment) (Scotland) Act 2021 came into force on 14 November 2021, increasing the investigative powers available to the police, and stiffening the penalties for people who allow their dogs to worry or kill livestock.

Irresponsible dog owners can now be fined up to £40,000 and sent to prison for 12 months for the most serious cases in Scotland.

“I welcome the first minister’s commitment to the Scottish government taking forward work to raise awareness of the Act, especially as we approach lambing season,” said Ms Harper after the meeting.

“Any attacks on livestock can have serious financial and emotional consequences to Scotland’s farmers, who work extremely hard, 365 days each year to ensure our food supply.”

NatureScot and the chief constable of Police Scotland have also been asked to advertise and promote the Act “so that people are aware of the serious consequences of allowing their dogs to attack or worry livestock”.

Meanwhile, legislation that could tighten sheep-worrying controls in England and Wales is progressing through Westminster, with the Animal Welfare (Kept Animals) Bill having reached the report stage in the House of Commons, prior to moving to the House of Lords.

As well as a clampdown on puppy smuggling and a ban on keeping primates as pets, the bill plans to give new powers to the police “to provide greater protection to livestock from dangerous and out of control dogs”.

NSA chief executive Phil Stocker said: “Simply including the instruction for dogs to be on a lead when in the proximity of grazing livestock would reduce these terrible incidents, and increasing the fines would act as a deterrent for irresponsible dog owners who do not keep their dogs under control.

“For government to continually ignore the stressful impact of dog attacks not only on sheep welfare, but also on the mental welfare of sheep farmers and keepers, is ludicrous.”

The comments follow a recent spate of sheep-worrying incidents, including one in which sheep were killed by a train after a dog chased them on to a railway line, and a case of the RSPCA being alerted when a sheep was chased off of a cliff by a dog.

Farmers Weekly was also told of a recent incident in Warwickshire were 66 ewes carrying twins were driven on to a road by two dogs, and another 30 were then attacked in the field.

“We chased two Alsatians across the field and they disappeared. Then the true horror was apparent – ewes half chewed, driven into a pond as well,” said the farmer.

“I have been a sheep farmer all my life and we are used to seeing blood and guts at lambing, but this turned us inside out.”

Six sheep died on the night and another one died later. The dogs were later picked up, 10 miles away.