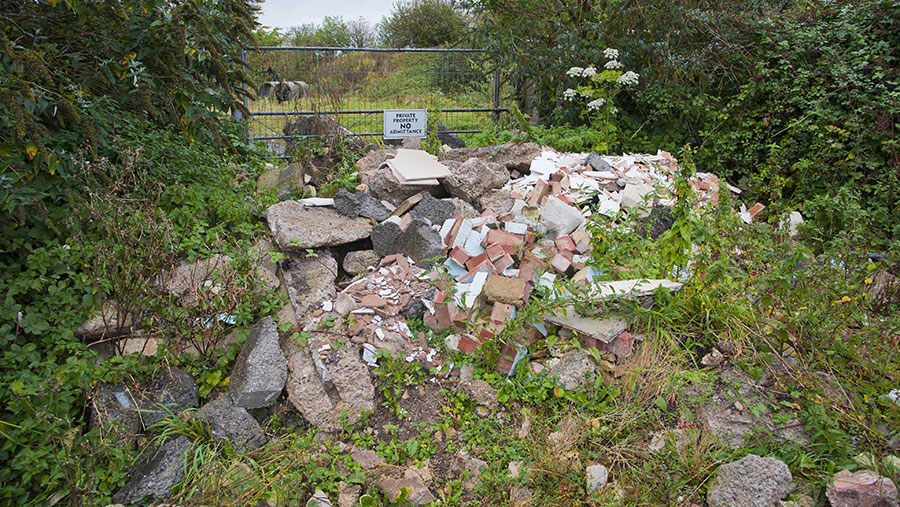 Fly-tipping is “spiralling out of control” and local councils need to reopen recycling centres and household waste centres as a matter of urgency, according to farm and countryside groups.

Quoting figures from waste dumping reporting app ClearWaste, the Countryside Alliance says overall fly-tipping is up 76% in the UK, while 90% of recycling and refuse centres remain closed.

Farmers are doubly hit, it says, both by the damage fly-tipping can cause to their crops and livestock, and the fact they have to clear up the dumped waste at their own expense.

Sarah Lee, head of policy at the Countryside Alliance said: “With no near end to the lockdown in sight, local authorities need to assess the feasibility of re-opening recycling and refuse centres as matter of urgency.”

Until that happens, the Countryside Alliance urges people to use a registered waste collector first.

“We are fully aware that rogue operators profit from charging cheap fees, and then dump the rubbish in the countryside,” said Ms Lee.

In Northern Ireland, the Ulster Farmers Union (UFU) has also seen a huge increase in fly-tipping in rural areas as the public struggles to deal with excess household and garden waste.

According to UFU deputy president Victor Chestnutt, it is vital local councils put in place measures to allow recycling and household waste centres to resume business as soon as possible.

“Garden waste, such as grass cuttings and hedge trimmings, may seem unharmful if tipped into a field, but if consumed by animals, it can cause sickness and even result in multiple deaths, creating severe financial pressure for the farmer,” said Mr Chestnutt.

Northern Ireland environment minister Edwin Poots recently wrote to councils setting out the principles they should adopt when considering reopening waste centres – but it contained no recommendation that they should do so.

The UFU is now contacting all political parties and councils urging them to reopen recycling centres to help tackle the fly-tipping problem.

A new mobile app has been launched by waste management company Biffa which allows farmers and landowners to report incidents of fly-tipping and their exact GPS location, which the company then promises to come and clear up within 24 hours.

Biffa FlyMapper is the latest addition to the FlyMapper group of applications, which have been the national fly-tipping monitoring systems in Scotland and Wales since 2014. A version for landowners in England is being trialled by Defra.

“It is a crime that damages our health, the environment and businesses in what is already an extremely challenging time.”

While the app is free, Biffa does charge for collection. “The price varies as fly-tipping can of course include all sorts of different waste and varies in scale, but prices typically start from £75 for two cubic metres,” said a spokesman.

The data will be made available to Defra to help it build up a picture of fly-tipping incidents across the country.