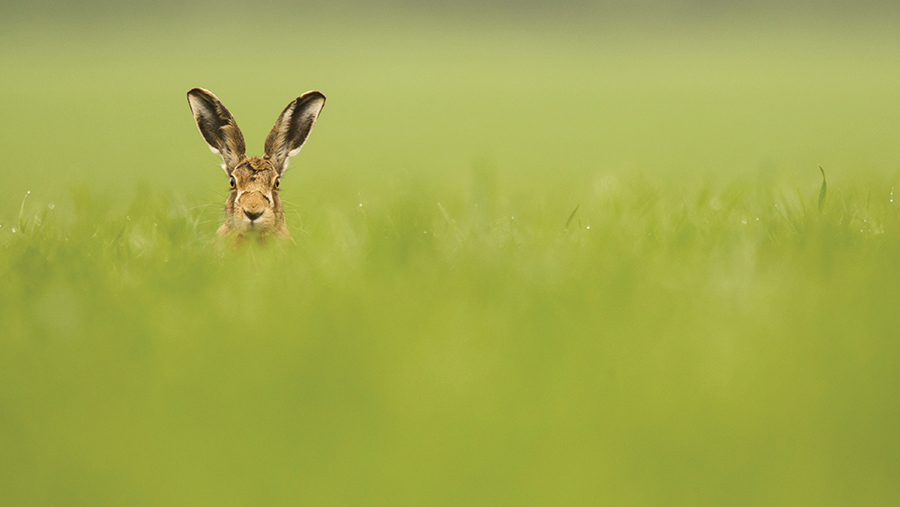 Extreme weather and the coronavirus pandemic resulted in a challenging harvest for farmers across the country, who must now deal with the next threat – criminals taking advantage of bare fields to poach hares.

Farmers face threats of violence and intimidation as well as damage to land, gates and fences. It is an annual occurrence that shows very little sign of abating.

The Country Land and Business Association (CLA) has responded this month with a five-step plan for farmers, the police and government to try to clamp down on this devastating rural crime.

There has long been the opinion from farm groups such as the NFU and the CLA that the punishment for hare coursing is not fit for purpose, as criminals cash in on the highly lucrative events where dogs compete against each other in pursuit of a hare.

The CLA wants to see tailored sentencing guidelines such as vehicle seizure and compensation paid to the landowner for any damage caused. It is also campaigning for laws to be amended to give the police and the courts more powers, including increasing the fines that can be imposed for poaching offences.

The farm group, which represents 30,000 businesses across England and Wales, says this also needs to allow police forces to reclaim the cost of kennelling confiscated dogs, if a conviction is secured.

Landowners and the public should report any hare coursing incidents from a safe location to the police by calling 101, or 999 if a crime is in progress. Phone app What3words will help give the police a precise location. The Country Land and Business Association warns farmers and landowners they can face violence if hare coursers are challenged.

CLA president Mark Bridgeman says: “Those involved in this crime are hardened criminals who will not think twice about threatening and intimidating anyone who attempts to stop them from pursuing this illegal activity.

“We hope, through our updated action plan, that our advice to farmers and landowners will be crucial in helping to prevent this type of crime taking place in the future.”

Hare coursing was banned in the UK by the Hunting Act 2004 and later became illegal in Northern Ireland in 2011. In England and Wales, police often seek prosecution through the older Night Poaching Act 1828 and the Game Act 1831.

Currently, legislation relating to hare coursing does not consistently give police and courts full seizure and forfeiture powers for dogs and vehicles, which are crucial elements of this illegal activity.

They also cannot recover kennelling costs when dogs have been seized, and fines are capped at low levels – £2,500 is the maximum fine under the Game Act. The NFU says amending the law on hare coursing to give police and courts these powers would be a significant boost to properly enforcing the law and making it more difficult for criminals to reoffend.

In March, a coalition of farm groups, as well as rural police and crime commissioners, wrote to Defra secretary George Eustice and home secretary Priti Patel, urging the government to reform legislation that is nearly 200 years old.

It said the “simple changes to the Game Act would give police the powers they need to properly tackle this crime and deter criminals with a sentence that fits the crime”.

“We heard from the police that the tools at their disposal are simply unsuitable and that there needs to be a change to the law to make a real difference. If there is to be lasting change when it comes to tackling rural crime, it needs to come in the form of legislation that will help the police, not hinder them,” he says.

The government said it would keep the issue of further measures to deter and prosecute offenders under close review. A spokesman said: “It is an offence to hunt a wild mammal with dogs and anyone who believes illegal hunting is taking place, or has evidence of this, should report it to the police.

“We are clear that those found guilty should be subject to the full force of the law.”

The CLA has also called for the National Wildlife Crime Unit to receive the resources it needs to continue tackling hare coursing as one of its priorities. Defra and the Home Office have jointly contributed £301,000/year between 2016 and 2020 to the unit. 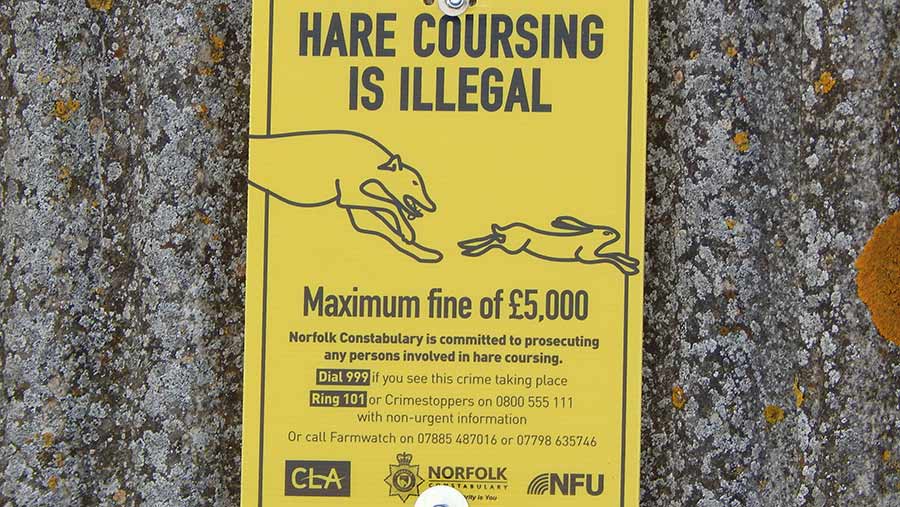 The government has committed to maintaining this money for 2020-21, but future funding will depend on the next Comprehensive Spending Review, which will be published in the autumn.

Lincolnshire has been a popular county for hare coursers to target over the years (see “Lincolnshire hare coursing reports up by 20%”) and Chief Insp Phil Vickers says the focus is on prevention, by making use of tactics that affect offenders.

“We have been able to seize dogs and have them forfeited at court – this continues to be the sanction that has the greatest effect and makes Lincolnshire an unattractive place for offenders to visit,” he explains.

Lincolnshire hare coursing reports up by 20%

Rural insurer NFU Mutual reported that rural theft reached an eight-year high last year and it is believed many hare coursers have strong links to other forms of criminality.

Rebecca Davidson, rural affairs specialist at NFU Mutual, says: “Sadly, the true extent of the problem remains hidden because some people are too terrified to report these crimes to police for fear of retribution.

“As well as facing intimidation, violence and damage to property, many farmers tell us that they go on to suffer from more rural crime as these individuals use the opportunity to scope out and steal from the farm.”

Tackling hare coursing is a priority for the Scottish Partnership Against Rural Crime, which Police Scotland is a member of. The force says coursing is a significant issue up the east side of Scotland, from the Scottish Borders, into East Lothian, Fife and particularly the Angus area into Aberdeenshire.

Phil Rowbottom farms 135ha of arable land on the South and West Yorkshire border, near Woolley. The farmer says every year he has needed to step up security to deter hare coursers. 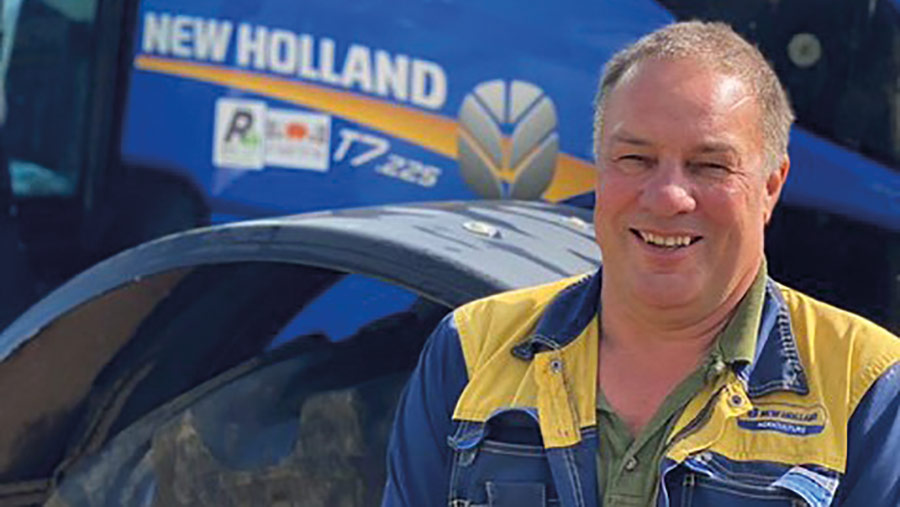 This now includes an electric gate at his main farm entrance with mounted CCTV cameras that photograph number plates, as well as concrete blocks and trees in field entrances. “I have the entire place pretty much surrounded, because I need to,” he says.

Mr Rowbottom says the police need to be more proactive to make any proposed changes to sentencing for hare coursing worthwhile. “There is no point having tougher sentences if the police can’t get people in custody,” he explains. 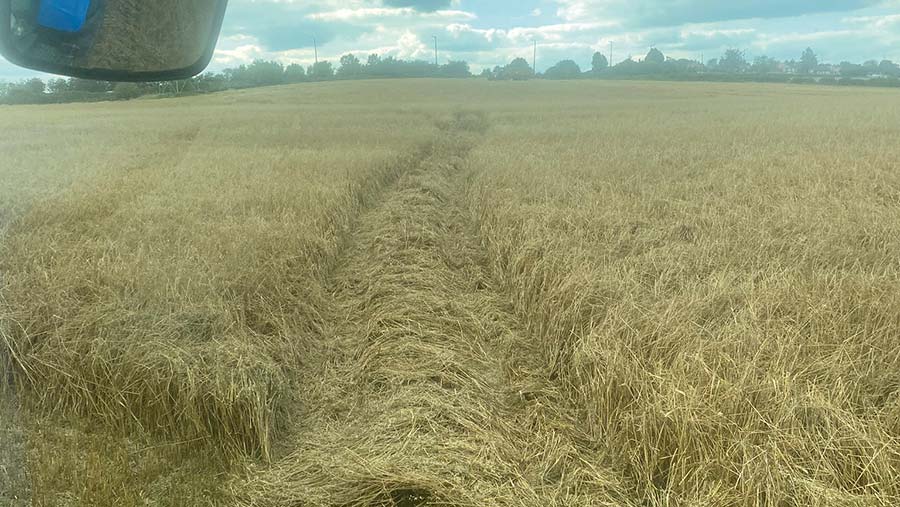 Damage to the oat crop

In the past few weeks poachers ripped through a field of oats, flattening a strip of the crop that was ready for harvesting. The farmer says he saw one hare this harvest and that their population was now “virtually non-existent” on his land. “As a farmer I want nature to thrive – that is how we get on. But I can’t if these idiots keep coming and ruining it.”

There is also a fear of reprisals if frustrated farmers challenge the criminals. “They’ve got every retribution against you, whether they set fire to your shed or your straw stack, or puncture your diesel tank – there is nothing we can do,” Mr Rowbottom says.