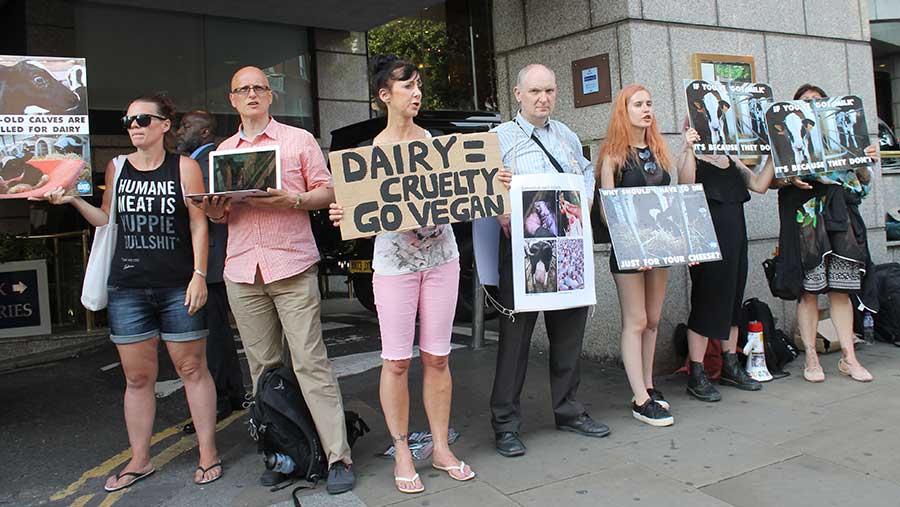 Claims of orchestrated animal cruelty were directed at leading UK dairy sector representatives as they arrived for the annual Dairy UK dinner in London on Wednesday (21 June).

Farmers and milk processors gathering for the event at the Royal Garden Hotel, Kensington, were met with a barrage of noise and criticism from about 50 animal rights protesters and vegans on the pavement outside.

Passers-by were handed leaflets denouncing the “unnatural” practice of impregnating cows and then removing their calves so as to provide milk for another species [humans] to consume.

Protesters also condemned the welfare issues of mastitis and lameness, the treatment of male calves as a “waste product” and the practice of culling dairy cows if they failed to get pregnant or milk yield dropped.

Chants included “Humane milk, it’s a lie, how many babies have to die” and “Not your mum, not your milk, not your body, not your babies”.

One protester from Brighton, who asked not to be named, insisted that farmers should adopt a more ecological approach to food production.

“We should be using hydroponics to grow more plants to feed humans around the world, not manipulating animals to line the pockets of a few global corporations,” he told Farmers Weekly.

He urged consumers to “wean themselves off milk”.

But Dairy UK chief executive Judith Bryans suggested the claims were misguided, insisting farmers work tirelessly to care for their cows, while processors and manufacturers adhere to stringent rules.

“Our goals as an industry are quite simple,” she said. “We want well-nourished and healthy people, healthy animals and a healthy planet.

“Animal welfare is paramount and we operate with some of the most robust standards across the world while always striving to surpass them.”

Delivering the best standard of care for the cow and the calf throughout their lives ensures the animals are healthy and prospering, she added.

“Cows calve once a year, prompting milk production which lasts around 10 months before the cow naturally stops. This is the same for bovine animals on farms or in the wild.”

Dr Bryans acknowledged consumers have a right to choose what they eat and should be able to do so based on correctly presented facts.

“As food producers, we have a duty to give the tools to make educated choices and we do so honestly and honourably.”