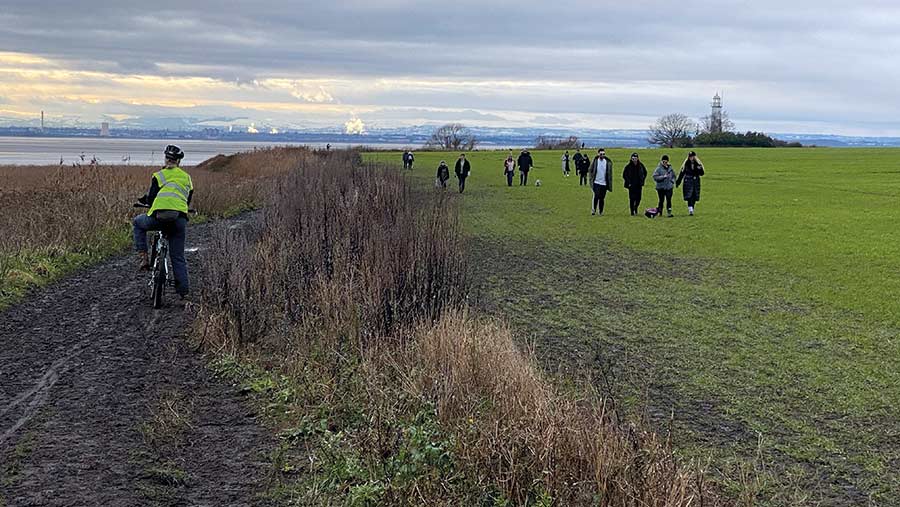 Natural England is to update the Countryside Code in light of the increased number of visitors to the countryside during the Covid pandemic and subsequent instances of damage to farmland and property.

Farmers suffering from an influx of lockdown visitors to the countryside are being urged to have their say on ways to minimise damage to crops and property.

Coronavirus rules limit people to one form of daily exercise in their local area – meaning a walk is often their only option.

But wet weather has seen people straying from muddy footpaths across fields – adding to problems that include litter and inconsiderate parking.

See also: Farming near footpaths – the law for arable farmers

Government agency Natural England says a number of “undesirable actions and activities” have taken place since the first coronavirus lockdown last year, including damage to the rural environment.

Many of these incidents were due to lack of public understanding about the countryside, rather than by deliberate acts of damage, it said.

The agency is now seeking views on how to refresh the Countryside Code to encourage people to act responsibly.

“We plan to update the short version of the code, aimed at visitors to the countryside,” says the Natural England website.

“We also plan to produce two versions of the full code – one aimed at visitors to the countryside, and one aimed at landowners and land managers.”

Many farmers feel under siege, especially those near cities.

Merseyside grower Olly Harrison posted a photo on social media of families abandoning a muddy public footpath to walk across an emerging wheat crop in his neighbour’s field in Hale, Cheshire.

Most walkers would probably be mortified if they realised they were trampling a wheat crop, said Mr Harrison.

Photos on social media were a better deterrent than signs in fields, he added. “I could stand there all day telling people to get off the land.”

Roads leading to Holme Fen, a nature reserve managed by Natural England, near Peterborough, were impassable for farm machinery.

“Farming doesn’t stop for Covid,” he said. “People just need to give a little bit of thought to farmers who are carrying on working.”

It was important that people followed the existing code and kept dogs on leads, especially around livestock, he added.

Have your say on the Countryside Code.

Farmers who are encountering problems with walkers straying from public footpaths are being advised to always stay within the law when taking action.

“If it’s muddy and the insurance company has no objections, look at a temporary diversion,” she said.

“You can’t block a public footpath, but you can put up a warning sign to tell walkers, ‘This route is very muddy, please use the alternative route’, with a sign and hazard tape to redirect them.”

Farmers should also go online and check the Definitive Map and Statement to confirm public rights of way on their land – to find out if the width of footpaths is wider than the legal minimum of 2.5m.

“They should also make a CA16 declaration confirming they have no intention to create or dedicate any other right of way, other than those stated on the definitive statement,” added Ms Dennis.