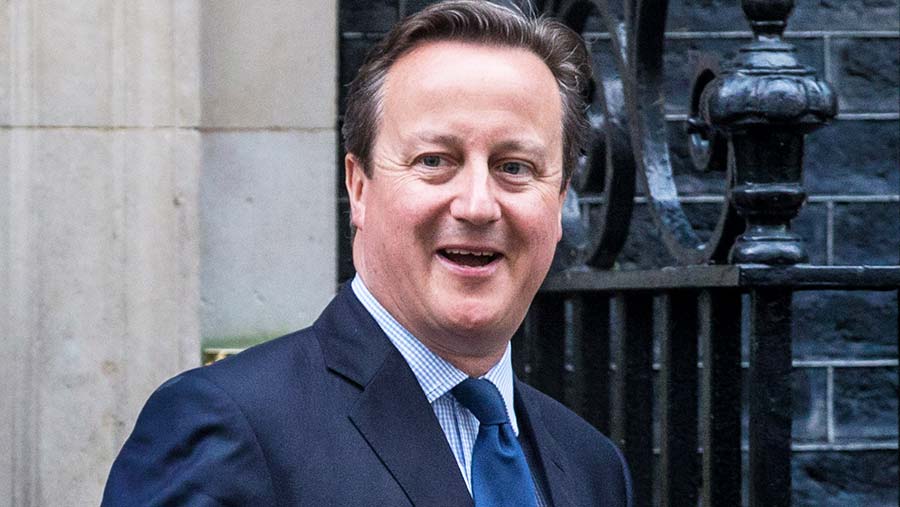 Brexit campaigners have welcomed David Cameron’s commitment to support agriculture if the UK leaves the EU, but said that he might not be around long enough to see it through.

The prime minister made the pledge in a letter to the Country Land and Business Association, but warned that he could not make the commitment on behalf of future governments.

In the letter, Mr Cameron said: “As long as I am prime minister, I would make sure that an agricultural support system would be properly maintained.

But he added: “However, I can obviously not make the same guarantees for future governments.”

Defra minister George Eustice, who is campaigning for the UK to leave the EU, said he welcomed Mr Cameron’s comments.

Mr Eustice said: “The prime minister has made clear that the government will continue to support British farmers financially if we vote to leave, and I agree with him.

“If we stopped sending £350m a week to the EU, we would save more than enough money to fund a national agriculture policy.

“While the official government position is that there is no plan B, I have done a lot of thinking about what a replacement policy would look like.

“I already have nine meetings scheduled with farming unions and environmental organisations to work out a more detailed plan for Brexit.”

Ukip MEP and agriculture spokesman Stuart Agnew also welcomed Mr Cameron’s comments, but said it was unlikely that the Tory leader would remain in power in the event of an EU exit.

Farmers were deserving of government intervention and nobody in the “out” campaign was arguing for anything but ongoing support, said Mr Agnew.

“I welcome David Cameron’s statement that he would support agriculture in an independent UK, but note that he is unlikely to have the opportunity to do so, given that his leadership would be made untenable by a public vote for Brexit,” he said.

The real issue highlighted by the farm subsidy controversy was that the farming industry urgently needed to address its chronic lack of leadership in the debate, said Mr Agnew.

“The industry has become good at playing the “hard-done-by” role to garner public support for our benefit dependency, but it doesn’t present a positive case for ring-fencing farm support.”

The £3bn received by UK farmers was less than the NHS overspend in 2015 – and a small amount in overall budgetary terms – but few in farming were making that case.

“As an industry, we seek all too often to rely on politicians to solve our problems, particularly when it comes to managing supply and demand.”

The UK farming industry needed to have clear and cohesive message about the purpose of farm payments and why they were so essential to the country as a whole, said Mr Agnew.

He added: “The opportunity to create an independent UK farm subsidy system, with all the advantages it could bring, should not be disregarded in a hurry.”