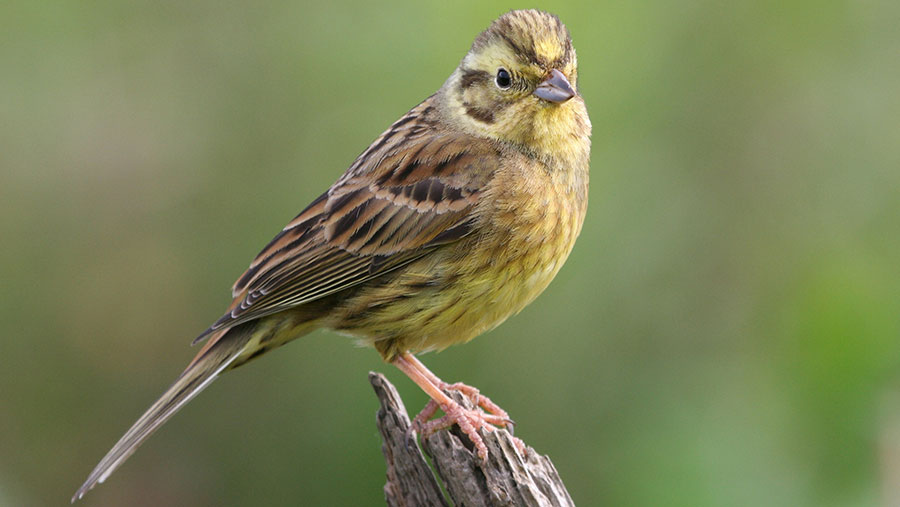 New research funded by Natural England and Defra – and published in the science and conservation journal Animal Conservation – used six years of survey data to track changes in the abundance of birds on farms across three English regions.

The study involved more than 60 farms managed under higher level stewardship agreements from 2008 to 2014. Some 12 of 17 priority farmland bird species increased in numbers across the three regions – against a 56% fall in farmland bird numbers nationally since 1970.

See also: Birds in decline: How do they work that out?

The Farmland Bird Index – a measure of bird numbers seen by conservationists as an indicator of biodiversity – increased by 31% to 97% in the three regions during the study period. This compared to a 9% decline in the index nationally between 2010 and 2015.

Findings from the study were published on Wednesday (3 January) – the day before Defra secretary Michael Gove is due to give a keynote speech at the Oxford Farming Conference – and then hold a Q&A with environmentalists and farmers at the rival Oxford Real Farming Conference.

Repeating his recent assertion that farmers are “the original friends of the earth,” Mr Gove said: “These results show that with the right management, and more targeted support for farmers, we can reverse the decline in numbers of our birds.”

The RSPB said the study showed that agri-environment schemes had a positive impact on farmland bird populations. Evidence that declining birds could recover proved the need for an overhaul of the UK’s agriculture system that rewarded farmers for working for nature, it said.

Farmers had the potential to deliver large and rapid population increases in a number of struggling farmland birds, such as skylark, starling and linnet, if they were given the funding and support to manage their land in a wildlife-friendly way.

RSPB head of research Will Peach said the UK had experienced a “massive loss of farmland wildlife” since the 1970s, with Defra figures published only last month showing that this loss had continued during the last five years.

“Many farmers are doing great things for wildlife and, without their efforts, the countryside would undoubtedly be in a much worse position.

“We have the knowledge and the tools to reverse farmland bird declines, what we need now is the political will to implement them more widely.”

The NFU agrees that future government policy should reward farmers for the environmental goods they deliver. But it says the extent to which future policy focuses on the environment rather than productivity or volatility measures must depend on the UK’s final Brexit deal.

NFU vice president Guy Smith said: “News that through good farm management birdlife can be increased will come as no revelation to most farmers. Most of us witness every day on our farms how it is possible to combine food production with good conservation.

“That is why, at its peak, over 70% of farms were in environmental stewardship. It’s good to hear the RSPB acknowledging this success. However, we also need to remember farms aren’t just about nature conservation, they also need to be about profitable food production.

“It’s difficult, if not impossible, for a farm business to be truly green if it’s in the red.”