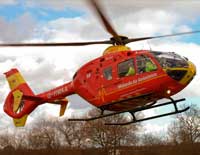 A boy has died after falling into a slurry pit on a farm in Shropshire.

The boy, thought to be about seven years old, was found in the slurry pit at a property near Broseley at 1:20pm on Friday, 24 July.

Attempts were made to resuscitate him, first, by a member of the public, then by West Midlands Ambulance Service staff.

He was flown by the Midlands Air Ambulance to Princess Royal Hospital in Telford but was pronounced dead shortly after he arrived.

West Mercia Police were unable to reveal his age or name.

A spokeswoman for the police said: “Crews arrived to find a young boy in cardiac arrest being given cardio-pulmonary resuscitation by a member of the public.

“Medics were on standby at Princess Royal Hospital awaiting the arrival of the boy who was in a critical condition.

“Unfortunately despite the best efforts of the family, ambulance crews and hospital medics nothing could be done to save the boy and he was sadly confirmed dead.”

The Health and Safety Executive is conducting an inquiry and visited the farm over the weekend.