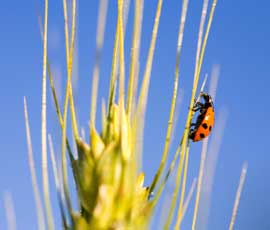 The European Commission has defended controversial plans that will force farmers who receive subsidies to implement environmental measures on their land.

A “greener” Common Agricultural Policy was vital to help offset environmental damage caused by farmers intensifying production in the face of soaring input costs, it said.

These comprise a ban on ploughing up permanent pasture, maintaining a rotation of at least three crops on arable land and placing 7% of farmland in designated “ecological focus areas”.

The justification for greening was set out by Tassos Haniotis, director of economic analysis for agriculture at the European Commission.

“From an economic point of view, it makes sense for a farmer to look at how to minimise costs and that is being done by ignoring, in the short term at least, environmental costs,” he said.

Since 2004, global farm output prices had risen by 60%, said Mr Haniotis. But over the same period, global fertiliser and energy prices had increased by about 200%.

Mr Haniotis acknowledged that Brussels was effectively taking a stick to farmers by making direct subsidy payments under Pillar One dependent on environmental measures.

But it was also introducing a carrot in the form of incentives that would reward farmers who undertook additional agri-environment measures under Pillar Two.

Doing so would address the “significant failure” of the market to respond to environmental priorities, said Mr Haniotis.

It would also help ensure the CAP kept on responding to environmental challenges, he told a conference of agricultural journalists in Brussels.

“Sustainable agriculture is agriculture which is at the same time economically and environmentally viable. These things go hand in hand.”

David Baldock, director of the Institute for European Environmental Policy, agreed a step change was needed to make sure agriculture was sustainable in the long term.

It was vital measures were introduced to protect resources such as soil and water while public money was still available on a large scale to do so, he said.

“When you look at the data for how we are doing for the environment in Europe and for rural areas, it is not a terribly encouraging sight.”

Some 45% of agricultural soils had a low carbon content, Europe was failing to meet its biodiversity targets and there was widescale pollution from nitrogen.

“I think the commission is correct,” said Mr Baldock. “This is not a small-scale problem – it requires action through the CAP and the 30% figure for greening is not inappropriate.”

But farm leaders remain frustrated by the commission’s proposals.

All too often, productivity gains had not benefited farmers, he added. Food had become cheaper but farm incomes had not risen.

Visit our special report on CAP