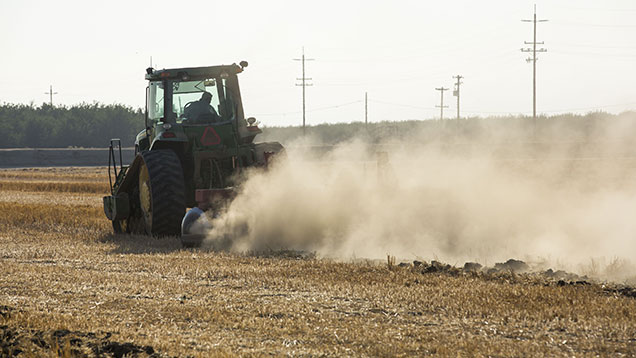 Farmers in California are facing hard spring planting decisions as the state warns that water rights may soon be restricted due to a devastating drought.

The state’s water board has notified holders of more than 36,000 water rights that their use is likely to be curtailed within key watersheds.

California, the USA’s biggest agricultural producer by value, is now in its fourth year of drought with record low snowpacks, and has official been in a state of emergency since January 2014.

More than 400,000 acres of farmland were left fallow last year after drought conditions forced the state to restrict 5,000 water rights dating back as far as 1914.

The Californian government said thousands of agricultural jobs were lost as a result and that this was likely to be repeated this year.

The announcement came within days of a report by Newsweek that some farmers were using waste water that had come from oil giant Chevron as an emergency measure.

Mandatory restrictions to reduce urban water use by 25% were announced last week, for the first time in state history.

A key source of water for California is its snowpacks. But last week the state said these measured just 6% of what they normally were, the lowest on record.

California’s governor George Brown said: “Today we are standing on dry grass where there should be five feet of snow. This historic drought demands unprecedented action.”

Last year was the driest year in California since records began 119 years ago.

California accounted for almost 11% of the USA’s agriculture products by sales value in 2012 (about $46.4bn or £31bn), according to the US department of agriculture.

The state produces more than 400 agricultural commodities, including nearly half of all US-grown fruits, nuts and vegetables.