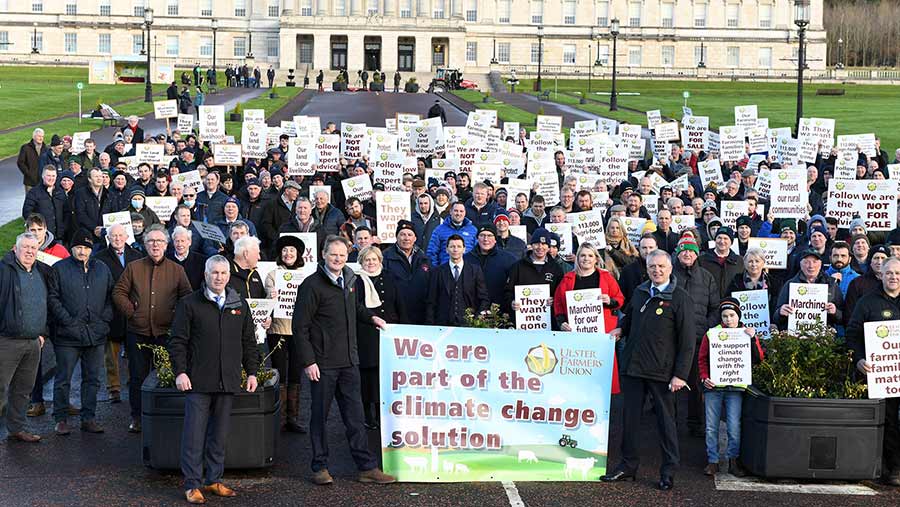 Tougher climate change targets are on the way in Northern Ireland, which look set to impose greater challenges for livestock-based agriculture in the region.

Two climate change bills are being considered by the NI government – one from Green party leader Clare Bailey which is seeking 100% net-zero carbon emissions by 2045, and a more lenient bill from agriculture minister Edwin Poots, aiming for an 82% reduction in emissions by 2050.

This second bill – which is in line with the recommendations of the UK’s Climate Change Committee – is being debated by the devolved parliament at Stormont this week.

One amendment from Ms Bailey had sought to reset the 82% target to 2045, rather than 2050, but was not voted on because the proposer was absent from the chamber at the time.

Farmers, who demonstrated outside Stormont in support of the Poots bill, expressed their anger and disappointment at the change to a 100% net-zero target.

Ulster Farmers’ Union (UFU) president Victor Chestnutt said: “This net-zero target of 2050 goes against the advice of the experts on the Climate Change Committee. They originally highlighted that it was not achievable for NI and would result in at least a 50% reduction in livestock numbers here.

“We need to stop global warming, but a net-zero target will not do this. It is unrealistic and can only be met by cutting livestock numbers on local farms.

“Even by doing that, it would still not solve climate change. Instead, it will export our food production overseas to meet consumer demand for meat and dairy products, where emissions are higher and standards are lower.”

He claimed that about 113,000 jobs in the agri-food sector would become vulnerable overnight if the 2050 net-zero target became legislation.

But Ms Bailey said the amendment “has significantly increased the ambition of the climate change bill, and is an important step towards ensuring we have strong and robust climate legislation”.

She hoped the parliament would back other Green Party amendments “to establish independent oversight of climate policy, and enshrine principles of a just transition, where no one is left behind”.

“This includes a Green Party NI amendment to establish a ‘just transition fund for agriculture’, to ensure farmers are financially supported in the transition to net zero.”

But Mr Chestnutt doubted such measures would be enough.

“A ‘just transition fund for agriculture’ means nothing,” he said. “It’s not a just transition when a target has been set that goes against expert advice.

“It begs the question, why would the UK government give NI extra money to meet climate targets that they continually advised us not to set?”

Northern Ireland is currently the only region of the UK with no legal target for greenhouse gas emissions reductions.

The aim is to complete the passage of the bills by the end of March, when the current parliamentary session ends.

If the Green Party secures the amendments it is after in the Poots bill, it is likely the Bailey version will be dropped.