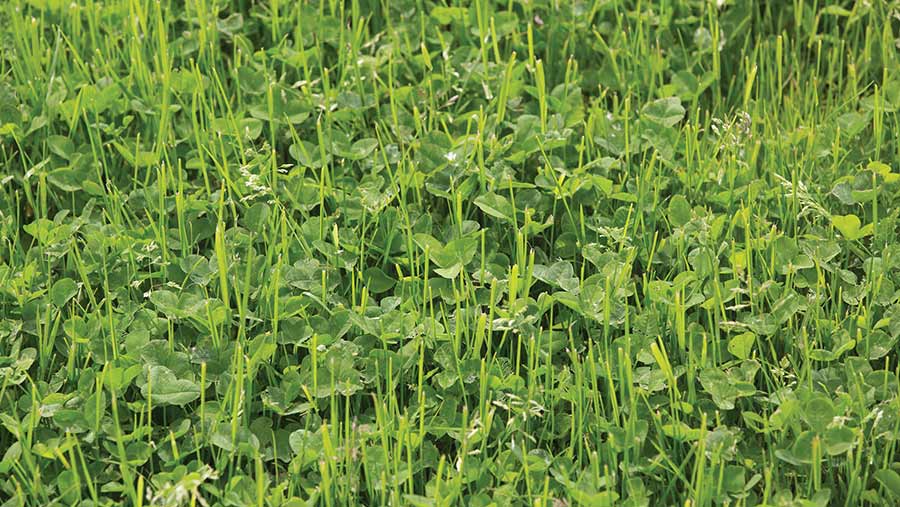 Cattle that graze pasture rich in white clover produce just half the amount of nitrous oxide than previously thought, according to a study carried out by Rothamsted Research.

The findings suggest the climate impact of grass-fed cattle herds is overestimated and could help farming achieve its ambition of becoming a “net zero” emissions industry by 2040.

Nitrous oxide is a potent greenhouse gas that is 265 times more harmful than carbon dioxide and thought to account for 40% of beef supply chain emissions.

How the emissions study worked

Most studies of emissions from livestock combine data from a variety of experimental systems in addition to some estimated values from the Intergovernmental Panel on Climate Change (IPCC).

These figures assume all cattle urine or faeces deposited on soils cause the same volume of nitrogen-based emissions irrespective of pasture type.

However, researchers at Rothamsted created a more realistic farming scenario by measuring emissions from one herd using a near “closed” system, which allowed the flow of nitrogen from soil to forage to cattle, and back to soil again (as deposited urine and dung) to be monitored.

Weaned cattle were randomly assigned to each system. Urine and dung samples were collected from the cattle and applied to areas to reflect simulated grazing with grass also cut twice.

Soil and grass samples were also taken so scientists could analyse microbial activity.

What the study found

The trial found the white clover-high sugar grass mix had the lowest urinary nitrous oxide emissions compared with the other two pasture types, when the effect of nitrogen fixation from clover was removed from calculations.

Nitrous oxide is most associated with urine, so researchers focused on this.

Results showed clover had an emission factor of 0.44% for urine following exclusion of fixation. This is nearly half the amount of the most recent IPCC figures for urine, which estimate a factor of 0.77%.

This compared with 0.55% of nitrogen losses from urine for the permanent pasture and 0.76% for the high sugar pasture, which were higher because they also received fertiliser and the effects of urine could not be isolated.

At field-scale, researchers also observed lower amounts of the nitrous oxide-producing gene in the white clover/high-sugar grass mixed sward, which suggests a complementary relationship between these species.

Lead author of the study, Graham McAuliffe, said: “Regarding white clover, we have seen benefits on the Farm Platform time and time again. At a system level, including methane and carbon dioxide, this is largely driven by avoided nitrogen fertiliser production and application.”

White clover roots have the ability to “fix” nitrogen from the atmosphere.

Dr McAuliffe said new models would need to be created to estimate just how much these new, lower values could reduce total greenhouse gas emissions, and more work would need to be done to understand the relationship between clover and high-sugar grasses, particularly at the soil microbial level.

Nitrous oxide emissions can account for more than 40% of entire supply-chain greenhouse gas emissions so, used in calculations of the climate impact of beef, these findings can have considerable significance.

Atmospheric chemist, nitrous oxide expert and co-author Laura Cardenas added: “Although white clover is unlikely to be a ‘silver bullet’ for agriculture’s net-zero ambitions on its own, adopting combinations, such as increasing legume-inclusion in pasture compositions and the utilisation of ‘low-carbon’ fertilisers, will be essential to maximise farming’s national and international contribution to a cooler planet.”