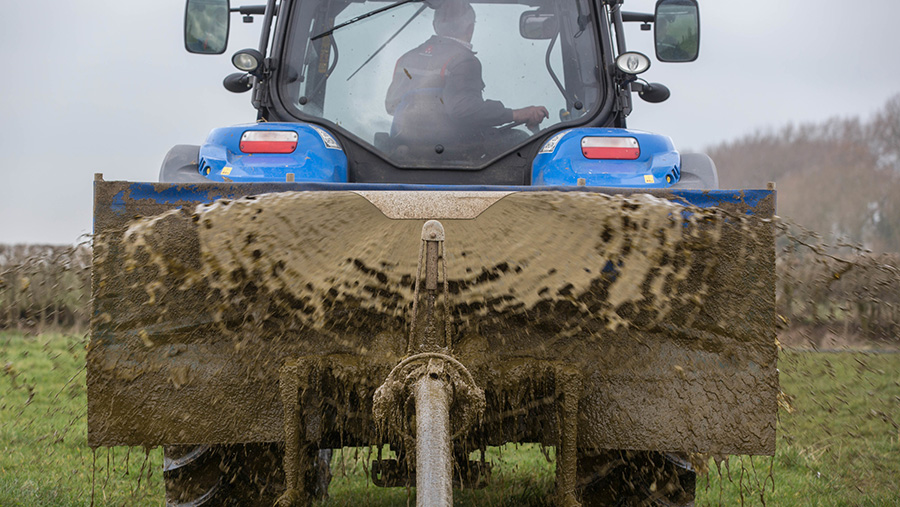 Dairy farmers and potato growers fear their businesses will be seriously hampered if Welsh government plans for a massive expansion of nitrate vulnerable zones (NVZ) are approved.

Less than 3% of Welsh farmland currently falls within an NVZ but the Welsh government is about to consult on plans that would draw in 25% of all land used for milk production.

Half of Wales’ potato growing area would also be designated as an NVZ.

Pembrokeshire would be the region most affected where up to 2,000 land holdings in the Cleddau Rivers catchment and the Milford Haven waterway would be subject to restrictions on fertiliser and manure spreading.

Land draining into a number of lakes on Anglesey could also be affected.

A further lake is under consideration in west Carmarthenshire, where there is a high concentration of dairy farms, and also a groundwater designation.

The plans have received short shrift from farmers whose land falls within the proposed zones.

Tenant dairy farmers Jeffrey and Elinor Evans, who run a herd of cows at Broadmoor Farm, a county council holding near Wolfscastle in Pembrokeshire, are fearful for the future of their business.

The couple have a spring-calving system and, when conditions are favourable, cows are out at grass at the beginning of February.

Livestock manure nitrogen (N) farm limit A loading limit of 170kg/ha of total N from livestock manures – deposited during grazing and by spreading – a calendar year, averaged across the farmed area

Grassland derogations Farms with at least 80% of the agricultural area as grassland can apply for a derogation to operate at a higher manure N farm limit of 250kg N/ha.

Closed periods These prohibit the spread of organic manures and manufactured nitrogen fertilisers during specific periods of the year. These vary and depend on country, crop type and soil type.

They are intensively stocked on their milking platform at about six cows a hectare and the capacity of their slurry storage facilities would leave them well short of the five months required under NVZ regulations.

The council, which owns the farm, has told Mr and Mrs Evans there is no cash available to establish an NVZ-compliant lagoon.

“We have been in discussion with the council and they have told us that there is no money for extending slurry storage at the farm.

“I’m not sure how we are going to cope if these new rules do come in,” said Mr Evans, a First Milk supplier.

“The intensity of how we produce milk on our farm is in jeopardy.

“If we are forced to cut cow numbers our income will go down too. It is a real problem for us and could be the nail in the coffin.

At nearby Letterston, Jordanston Farm also neighbours a tributary of the western Cleddau and is likely to be included if the designations go ahead.

Mansel Raymond runs a herd of 300 dairy cows together with followers at this holding.

As with Broadmoor Farm, there is not sufficient capacity for storing five months’ worth of slurry at Jordanston Farm.

“Who on earth is going to have the spare cash for the capital investment that would be needed to become NVZ compliant? There is no money in the dairy sector,” said Mr Raymond.

When the last round of designations was made in 2012, £3.1m in grant funding was made available for increasing storage capacity.

It is unclear what level of funding, if any, will be available this time.

Mr Raymond is concerned that the nitrate regulations will impact farm productivity.

“We are a major grass growing county producing lots of milk and we also grow a lot of winter wheat, potatoes and oilseed rape.

“Regulation is forcing us to do more and more non-productive work, there is no groundswell of reason behind these new regulations”
Mansel Raymond, dairy farmer

“We will be forced to reduce the inputs that help us to capitalise on that early advantage.

“Regulation is forcing us to do more and more non-productive work, there is no groundswell of reason behind these new regulations.’’

It is expected that farmers will be consulted on the proposals in the near future.

NFU Cymru insists there must be a 12-week consultation and that this period should not coincide with the dissolution of the Welsh government and purdah (the period immediately before an election or referendum when there are restrictions on the activity of civil servants) ahead of the assembly elections in May.

The union wants farmers to be in a position to explain the impact of proposals to their assembly members.

It added that the draft action programme for farmers, together with a regulatory impact assessment, must be released at the same time as the consultation on new designations.

Otherwise, farmers would be unclear on what the designation would entail and the likely impact to their businesses to respond to the consultation from an informed position.

NFU Cymru said any planned designations must be based on robust scientific evidence that watercourses are polluted with nitrates from agriculture.

“We don’t feel we are at that point,” said Walter Simon, NFU Cymru county chairman in Pembrokeshire.

“We are scrutinising the evidence base underpinning all the proposed designations very closely.”

The Welsh government would not confirm its planned timetable for publication but told Farmers Weekly: “We aim to launch a full 12-week consultation on both the NVZ designations and the action programme before the end of March.”