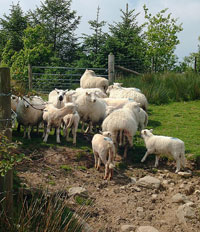 The government has relaxed controversial proposals due to have been included in a £31m initiative to reward upland farmers for looking after the environment.

Hill farmers will find it easier to join the Uplands Entry Level Stewardship (UELS) scheme after ministers abandoned plans to ban the use of ring feeders and relaxed rules governing fertiliser applications.

The new scheme, designed to reward hill farmers for the environmental and landscape benefits they deliver, will replace the Hill Farming Allowance (pdf) when it launches in January 2010.

DEFRA secretary Hilary Benn said: “So much of our history, our art, our literature and our sense of identity are tied up in these glorious landscapes, and it is right that we should ensure that farmers are rewarded for looking after them.”

Mr Benn said he was keen to encourage farmers to join the new scheme. “Following consultation and trials of the scheme over the summer, we have made a number of changes to respond to what farmers said to us.”

Funding is being increased from the £23.7m available under the HFA to £25m under the new scheme. This could be increased to up to £31m within the existing rural development budget should more farmers chose to enter the UELS.

Applications of slurry, fertiliser and manure were originally to have been banned within 12m of a watercourse. But the government reduced the distance to 6m after lobbying from farm leaders.

Cumbria farmer and NFU hill farming spokesman Will Cockbain said: “The scheme originally proposed had several practical difficulties. We think the new scheme is much better than it was and the practical problems have all but been resolved.”

In a bid to smooth the transition between the two schemes, the government has granted a one-year extension to the HFA. This means farmers will receive their last HFA payment in 2010, rather than in 2009 as previously announced.

Shadow DEFRA secretary Tim Farron, who is also chairman of the All-Party Parliamentary Group on Hill Farming, said the scheme contained a number of other changes that would also benefit the industry.

“I’m delighted that the new scheme will provide hill farmers with more money in the pot as well as the possibility of even more funding through the rural development budget should the scheme prove popular.”