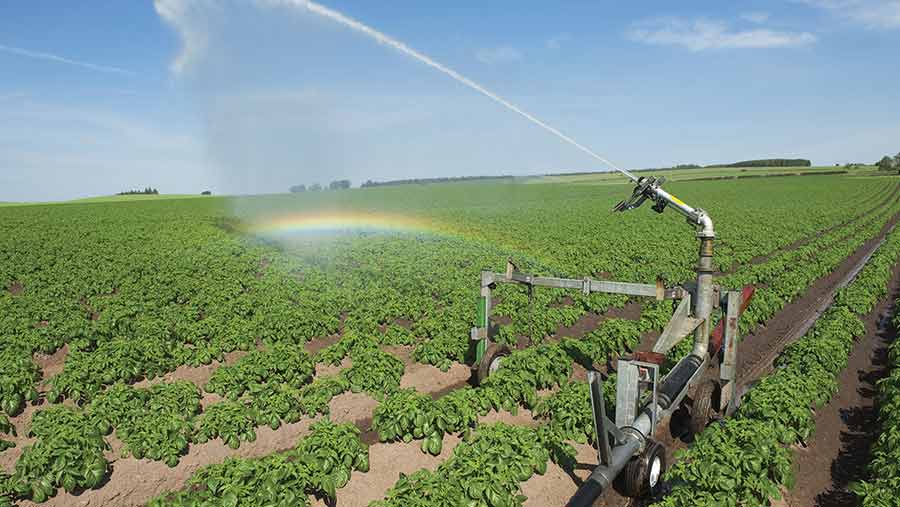 Growers who fear they will be unfairly penalised by tighter limits on water abstraction will be able to appeal against new restrictions due to be imposed by the government.

Plans to replace abstraction licences with a system of permits based on the amount of water abstracted over a previous 10-year period are not set in stone, a senior Defra civil servant told the UK Irrigation Association spring conference.

Up to 25,000 growers will be affected by abstraction regime reform. But many feel they will lose out under the plans. They argue that limits based on abstraction volumes over the past decade would be unfair because it was unusually wet so less water than usual was used.

Limits based on the amount of water abstracted during a particularly wet decade would leave farmers unable to abstract enough water in the event of a future drought, suggested growers at Orton Hall Hotel, Peterborough, on Wednesday (2 March).

Hopes were raised that there might be room for manoeuvre by Henry Leveson-Gower, head of abstraction reform at Defra. “The 10 years we are thinking of is still to be set,” he told delegates. The formula linked to those 10 years had not yet been finalised, he added.

The government says reform is necessary due to increasing demand for water – from agriculture, industry and a growing population. It also needs to implement environmental requirements of the EU Water Framework Directive. The reforms would come into effect from 2020.

Using the example of the river Lark catchment in Suffolk and Cambridgeshire, Mr Leveson-Gower acknowledged growers’ concerns. “We all agree that the 10 years to 2012 were all wet, so they were unrealistic. We could think of adjustments to take that into account.”

The volume of water allocated to growers for abstraction was “not the end of the story,” said Mr Leveson-Gower. The aim of the formula was to allocate roughly the right amount of water for most people. But growers would be able to appeal against their allocation if they felt it unfair.

Everyone would receive a “draft determination” of their permitted volume. There would then be a six-month period where they would be able to discuss their case with the Environment Agency and set out why they felt it was inappropriate.

Growers would then receive a formal determination of their permitted volume. They would then be able to appeal to an independent body. Mr Leveson-Gower said it was in Defra’s interests to be fair because it wanted to minimise the number of appeals.

“If we have loads of appeals, the process of moving into the new system will just drag on for years. So we are trying to work out a system where we address peoples’ issues as far as we can within their business needs to minimise the number of formal appeals.”

Norfolk asparagus grower Tim Jolly said he believed the Defra proposals still contained “too much stick and not enough carrot”. He added: “I cannot see many incentives coming out of the system to achieve what we all know we need.”