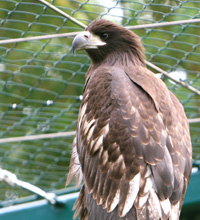 East Anglia and Suffolk have been earmarked as the ideal place to reintroduce a controversial bird of prey into England.

A report by Natural England and the RSPB concluded that the Suffolk coast offered the best opportunities for sea eagles to re-establish in the country.

The three-year study said the birds would thrive in the region’s wetlands, from The Wash to the Thames Estuary.

The birds have already been released in the west coast of Scotland, where they caused controversy after farmers claimed they were killing lambs.

Mark Avery, RSPB director of conservation, said: “These birds belong to lowland England as surely as they belong to the sea cliffs of Scotland. Man is the reason they are missing and it is for us to put that right.

“It is also why we must do this properly and with regard to people and wildlife nearby. The RSPB want eagles back, but without a return to the conflicts and misunderstandings that led to their extinction.”

Tom Tew, Natural England chief scientist, said farmers’ concerns over the reintroduction of the bird would be fully examined.

“It is important we continue to gauge views and address concerns – a project of this type has to be right for the area as well as for the ecological needs of the birds themselves,” he said.

The organisations will carry out local surveys over the next few weeks to gauge reactions to the proposals ahead of more extensive discussions with landowners, he added.

Henry Aubrey-Fletcher, CLA president, said the organisation was sceptical about the benefits of introducing the birds after a 300 year absence in England.

“In particular, farming and shooting interests need to be addressed.

“Land managers must be reassured that the sea eagles will not jeopardise their livelihoods by taking young livestock and game-birds.”

Once a native species, the sea eagle was driven to extinction in the UK in 1916.

The birds are predators which generally feed on fish, birds and rabbits. But they also have a reputation for targeting newborn lambs and piglets.