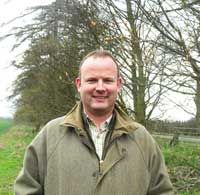 Last week saw the launch of a new DVD featuring the Upton Estate and highlighting the wildlife benefits that stewardship schemes ELS and HLS can bring.

Growing Farmland Wildlife offers guidance and support to farmers keen to improve their environmental standing. It is hoped that by encouraging those who have yet to register for entry level and those who have already set up, to choose the most rewarding stewardship options, there will be an increase in farmland birds and insects.

The film focuses on two options, a wild bird seed mix (EF2), and a nectar flower mix (EF4), both relatively simple to adopt and manage. It includes a tutorial section with tips on how best to deliver specific benefits.

Produced on an EcoDisc using half the carbon emissions of the standard DVD manufacturing process, the film, by Ken Slater in collaboration with the Wildlife Farming Company, DEFRA and Natural England, had financial support from Syngenta and the RSPB.

Available free of charge to growers and advisers, it can be picked up from Cereals 2010 and other summer events or ordered from Natural England direct at www.naturalengland.org.uk


Last season, with fertiliser prices as they were, Rob Allan lost money on his heavy land first wheats. But he made money out of wildlife at Upton Estate in Warwickshire.

In fact, 11% of the 800ha farm’s annual income is currently secured by environmental stewardship.

“I see wildlife as important as any crop on the farm. Over the five years of a stewardship scheme, we can turn over the same profit as we do growing wheat, provided we give it the attention it deserves.”


That’s no mean feat, with first wheat typically yielding just over 10t/ha on the medium to heavy land, 425ha of which is in arable production. The key to it, he believes, is his enthusiasm.

“We have gone from farming right up to the field edges a decade ago, through various set-aside covers, to having 13 entry level and 18 higher level stewardship options now. It’s been a steep learning curve, but when you see what’s achievable, there’s nothing better.”

Seeing is believing. The 15ha of bird food, 20ha of wildflowers and 20ha of legumes support some rare farmland birds and bees. Just seven months after sowing, four of Natural England‘s 10 most wanted farmland birds – linnet, yellowhammer, corn bunting and reed bunting – could be found overwintering on the farm.

A staggering 90 species of moths frequented field margins last June, and the nest boxes support at least six barn owl chicks each year. Upton is not only a diverse and interesting place to live, but a showpiece for British agriculture.

While it’s possible for growers to go it alone with ELS, it can be a daunting prospect deciding how and where to set up wildlife habitats. Mr Allan has been fortunate in having help with decision-making from the Wildlife Farming Company’s Marek Nowakowski (pictured), who has been carrying out trials at Upton for some years.

Mr Nowakowski knows his red from his white clovers, and where on the farm a mix of clover with grasses will work better for wildlife than a wildflower mixture, and the like. But Mr Allan believes growers with relatively little existing knowledge of wildlife shouldn’t be deterred.

“All prospective ELS candidates need is a give-it-a-go attitude and dedication to the cause. Anyone with a head for business will see the economics stack in its favour. There is far less financial risk with habitat production than with crop production. Wheat needs harvesting, storing and selling,” he stresses.

With set-aside no longer compulsory, Natural England and the Campaign for the Farmed Environment are keen to see growers increase the area of land voluntarily managed by at least 30,000ha, and double the current 40,000ha area of in-field ELS options in England.

Voluntary adoption of environmentally sound management practices has got to be better than compulsory wildlife habitat creation, Mr Nowakowski.

“If we fall short of Natural England’s target of 70% of agricultural holdings in agri-environment schemes by next March, we may see legislation follow. It’s not a huge leap from set-aside to some of the simpler and most beneficial ELS options, so what are you waiting for?”

He suggests trying options EF2 (wild bird seed mix) and EF4 (nectar flower mix), each worth 450 points across 100ha. Together they would amount to almost a third of the total ELS qualification.

The first decision is where to position these features – difficult or low yielding areas are fine. Then growers need to choose the most appropriate seed mix and manage accordingly.

Mr Nowakowski recommends siting EF2 next to hedges and woods so that birds have an escape route and shelter. He favours a mix of annuals including big and little seeded plants, and early and late species, for example, several cereals, quinoa, millet and fodder radish.

If biennial species like kale are included, while you don’t have to establish the cover every spring, you are likely to need nitrogen and a flea beetle treatment like you do in oilseed rape, he warns.

Either mix should be sown 1.5-3cm deep into a fine, firm seedbed between mid-March and the end of April. Seed rates depend on the species used.

Cutting is not a management option, so if the cover gets out of hand, you can in some cases resort to a selective herbicide. If it becomes inundated with grass weeds and volunteer cereals, Mr Nowakowski recommends Fusilade (fluazifop-P-butyl) to balance the species.

Option EF4, as a pollen and nectar source, can take the form of grass/clover mixes or grass/wildflower mixes. The former, sown at 10kg/ha, is particularly attractive to bees and butterflies in mid-summer, but lasts just three years.

The latter, which could include wildflowers such as meadow buttercup and bird’s foot trefoil, is better value for growers and has a wider appeal to wildlife. A 90% grass/10% wildflower mix at 20kg/ha broadcast on and ring- rolled in will cost £250/ha to establish, and it will last up to ten years if looked after, says Mr Nowakowski.

Slower species may become smothered by weeds so you may need to mow up to four times in the first year and remove cuttings at the end of the season, he warns.