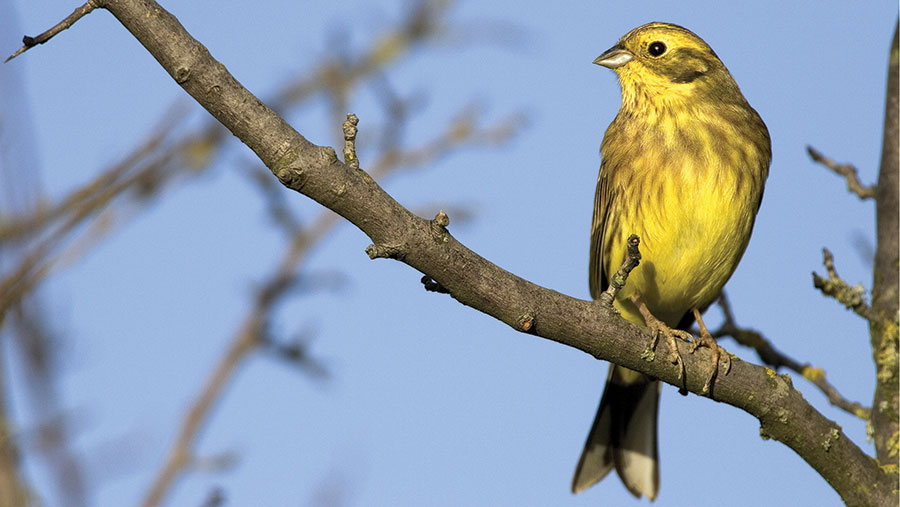 The Big Farmland Bird Count (BFBC) is a fantastic opportunity for farmers to unite and demonstrate the great conservation work they have been doing to encourage wildlife on their farms.

Sponsored by the NFU, the count will take place from 7-16 February. Organisers the Game and Wildlife Conservation Trust (GWCT) says there has never been a more important time to take part in the initiative.

Farmers have been coming under fire from anti-meat groups and environmental campaigners. But the count offers the chance to highlight the positive effect agri-environment schemes are having on bird numbers.

It’s also clear that data collection of wildlife habitats and ecosystems on farms will be integral to Defra’s post-Brexit plans for its Environmental Land Management (ELM) scheme.

Farmers, gamekeepers and landowners should get on board with the future direction of travel now and participate in the bird count, says Roger Draycott, GWCT head of advisory services.

“For many, the first step in this process is the simplest form of wildlife recording you can do on farm – counting the birds,” he says.

“It’s very straightforward. It takes half an hour and it allows you to get a good record of the wildlife on your farm. We believe recording data on wildlife and natural capital will be key to receiving agri-environment payments in the future.”

The BFBC started in 2014 to raise awareness of declining numbers of farmland birds, but also to highlight the positive work farmers were doing in agri-environment schemes.

Mr Draycott says Defra’s proposals to phase out direct subsidies and introduce a new system of paying farmers public money for public goods make the BFBC more relevant than ever.

“If farmers have very good populations of farmland birds on their farms, it is a demonstration that they are delivering a public good,” he explains.

“In future, if part of your agreement involves supporting wild grey partridges on your farm, part of that package might be that you do a count of these birds once or twice a year.

“It will just become integrated into your farm business in the same way that farmers are used to recording data on yields, mapping and soil nutrients.”

Farmers should focus on the “big three” areas of nesting habitat, summer and winter food sources when choosing options to help birds in Countryside Stewardship (CS), according to the CFE’s Paul Cobb.

Nesting habitat includes trees, hedges, field margins and areas within fields such as skylark plots. Many bird species rely on insects and invertebrates for their summer food, especially to feed their chicks. Winter food sources include wild bird seed mixes.

Marc Bull, of Bright Seeds, highlights a range of options to choose from under CS that provide food and shelter for farmland birds.

The latest government Farmland Bird Index shows bird numbers have declined by 56% in the past 50 years. Modern farming practices have been blamed for driving down farmland bird populations in the UK.

Agricultural changes – such as increased pesticide and fertiliser use, the removal of hedgerows that provide nesting and suitable feeding habitats for birds, changes in grassland management and the switch from spring to autumn sowing of crops – have all contributed to the fall in numbers, Defra says.

But positive changes undertaken by farmers through improved environmental stewardship are helping to halt the decline. The index, which is made up of 19 red-listed bird species, shows farmland bird numbers fell by 6% overall between 2012 and 2017.

Several species have shown marked change in numbers over this five-year period, with turtle doves decreasing by 51%, grey partridge by 19% and whitethroat by 15%, whereas stock dove and goldfinch increased by 18% and 16%, respectively (see graphic).

Last year, more than 1,400 farmers took part in the BFBC. More than 30 red-listed (endangered) bird species were among the 140 species spotted.

These included fieldfares, starlings, house sparrows and yellowhammers – all of which were seen by more than 30% of participating farms.

On a day between 7-16 February, spend about 30 minutes recording the species and number of birds seen on one particular part of your farm. Somewhere with a good view of about 2ha of the farm would be ideal.

Ideally, counts should take place at first light, when birds are most active. Guides for bird spotting and record sheets are available to download on the GWCT’s website at gwct.org.uk. For more information see the BFBC website.

Farmers who don’t have access to a computer can return their completed count sheets by post to: GWCT, Burgate Manor, Fordingbridge, Hampshire, SP6 1EF.

All results will be collated and the findings will be released later this year.

Why you should take part

Farmers play a crucial role in providing the nation with safe, traceable and affordable food. But the important role they play in caring for the environment through agri-environment schemes alongside food production is often overlooked.

The BFBC results will aim to determine which farmland birds are benefiting from conservation efforts, while identifying the ones most in need of help. This national picture can help demonstrate where subsidies and environmental schemes are working and areas where improvements are needed.

Under ELMs, which will largely by introduced by the government in 2024, payment by results (environmental outcomes) will form a key part of the policy.

Farmers will have to improve their monitoring and measuring of results to receive better payments. Therefore, it makes sense to start now and build a picture of your farm’s biodiversity.

Paul Cobb, from the voluntary initiative Championing the Farmed Environment (CFE), told a meeting of farmers in West Sussex last week their efforts to reverse bird declines are seriously unrecorded.

“The BFBC is the best 30 minutes you can spend for wildlife on your farm, ever. Not just because you will then know about the species you have, but then the whole industry can say: ‘We’ve got birds on our farms. We’re doing stuff with farmland birds and we will continue to do that.’”

Working with the AHDB, Mr Chandler has introduced wildflower pollinator field margin strips to see if beneficial bugs, such as ladybirds and hoverflies, can be grown to protect arable crops from aphid pests and diseases to improve pollination. 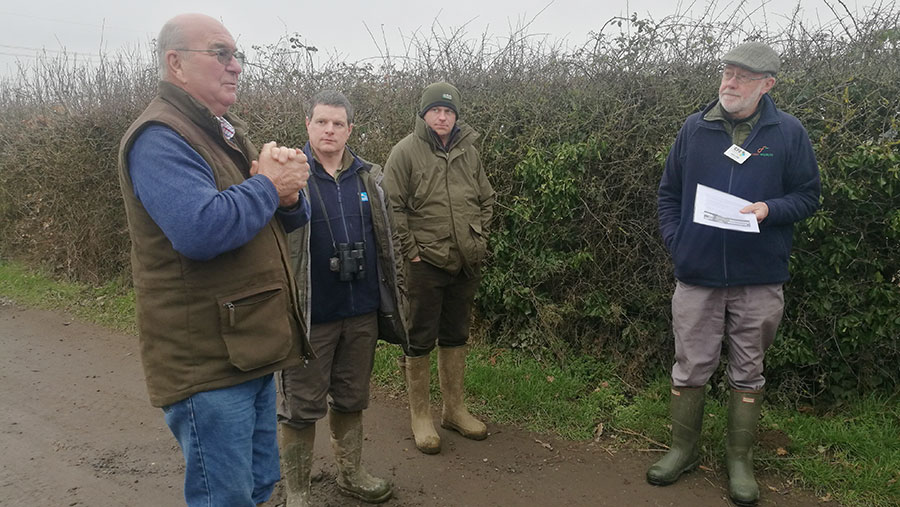 The driver is 100% resistance of aphids to current available OSR pesticides.

Free-growing hedgerows around fish ponds and lakes offer protection for smaller farmland birds and mammals. They provide an ideal habitat for red-listed birds such as yellowhammers and finches.

The height and width of the hedges is less than 3m – any higher and they become less dense, which reduces protection for smaller farmland birds and mammals.

Along farm roads, the hedges are trimmed every year, but they are left to grow under a two-year trimming rotation on the inside of fields.

Along the side of ponds, large teasel, blackthorn, ornamental thistle and knapweed all supply seeds for birds at different times of the year.

Lots of tadpoles and frogs grow and migrate from the ponds each year and they are a valuable food source for herons.

The Chandlers have extended their entry in Entry- and Higher-Level Stewardship schemes. They are considering applying for a Countryside Stewardship agreement ahead of entry into Environmental Land Managements in future.