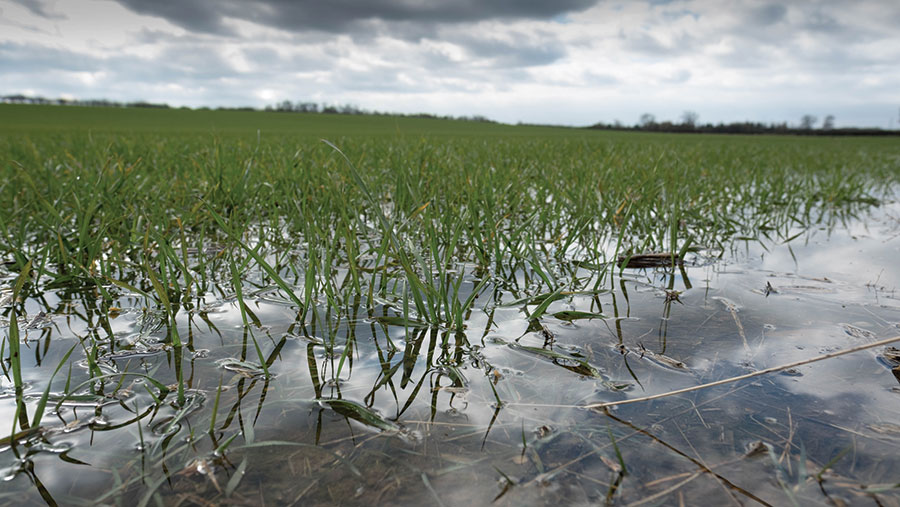 Applying early nitrogen (N) and phosphate fertiliser to wheat crops is the starting point for nursing them back to health, as farmers look to minimise the effect of waterlogging on crop yields.

Some cereal crops have rotted away in the cold, wet soils, while those that have emerged and survived are still sitting in saturated soils.0

This waterlogging will produce plants that are physiologically different to those in more normal seasons. They will, therefore, need to be managed differently if they are to yield.

Yara agronomy manager Mark Tucker pointed out at recent Association of Independent Crop Consultants annual conference that one key difference is that waterlogged crops have shorter and smaller leaves.

See also: How to avoid the top 5 nutrient deficiencies in OSR

Leaf area is essential for capturing as much sunlight as possible to drive grain production.

On top of this, root growth will have been be impaired by waterlogging and root structure will have deteriorated.

“The seminal root will die off, resulting in a different structure, with more adventitious roots,” Mr Tucker says.

Adventitious roots are shallower, which means plants will be more vulnerable to any spring drought and less able to search out nutrients. “Drought in March will be the last thing these crops need.”

However, not all is lost, as Mr Tucker points to research showing that under certain conditions, wheat can recover from prolonged waterlogging (42-80 days), with yields achieving 82-96% of controls.

Crops drilled this late have 4-6 weeks until they tiller, so they will need to be pushed hard. “You want them in, up and away rapidly.”

Applying 60% of the fertiliser in the seed-bed in a big hit will help achieve this, he says.

The current anaerobic soil conditions means any N will have been depleted, forcing plants to start taking N from older leaves for new growth, so crops will look poor.

Therefore, Mr Tucker says there is a need to go on with fertiliser in the next two to three weeks, if conditions allow tractors to travel and drains aren’t running.

This early N will help increase the size of leaves, as well as feed root development and maximise tiller numbers. The aim is to boost the number of ears/sq m.

Mr Tucker suggests two options. The first is to go with 30kg/ha and, if the crop is viable, follow up with another 30kg/ha two to three weeks later.

“If farmers don’t think they will have time for the follow-up application, the second option is to apply 60kg/ha.” But Mr Tucker adds that there will be a higher environmental risk of N losses when there are higher levels of soil water.

“Patience and a little-but-often approach may be key this season,” he says.

Don’t be too hasty

Mr Tucker also advises not to write off crops too early.

“We had one site last year that really struggled after being drilled late in dry conditions and suffering from grazing by birds. We considered writing it off, but still managed to get 7.5t/ha.”

For those deciding whether to cut back on overall rates, he suggest sticking with the standard 150-160kg/ha in first two applications then consider if the crop needs the last 50kg/ha using technology such as leaf tissue testing.

Soil phosphorus levels will also be at their lowest and now is a good time to start thinking about getting some fresh P on.