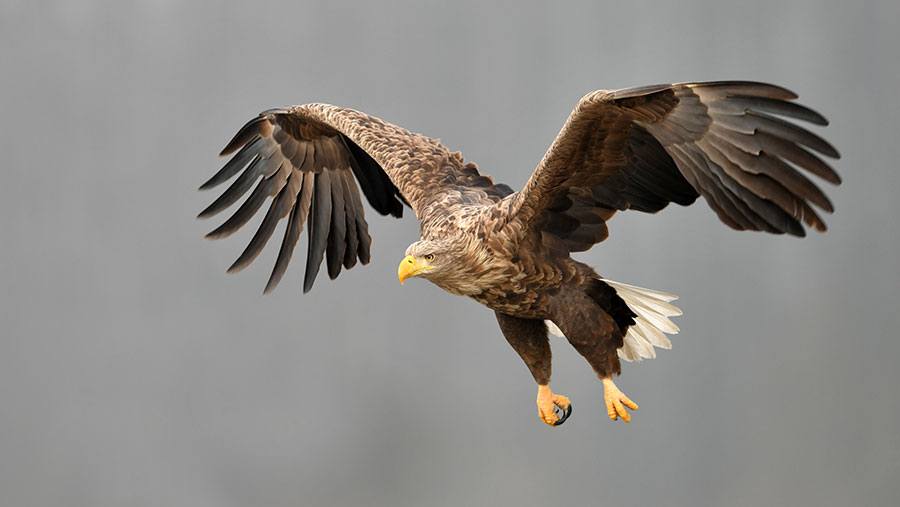 Scottish farmers in the Loch Lomond area of Scotland, to the north of Glasgow, have been advised to watch their sheep flocks carefully following the arrival of a breeding pair of white-tailed eagles.

NatureScot announced on Friday (11 June) that the UK’s largest bird of prey had been spotted on the loch in March for the first time in more than 100 years and a pair has since been searching for suitable nest sites.

“This is the latest chapter in the continuing success story of sea eagle conservation,”  said NatureScot operations manager Paul Roberts.

“Along with our partners, we carefully manage the reserve to offer rich and diverse habitats to support a wide range of birds and other wildlife, so it’s very rewarding to see the sea eagles return to Loch Lomond after all these years.”

But NFU Scotland president Martin Kennedy said the arrival of white-tailed eagles would be a big concern for sheep farmers in the area.

“With the growing number of sightings of adult and juvenile birds [in western Scotland], farmers had been expecting that, at some point, pairs of eagles would create territories within the Loch Lomond area,” he said.

“Knowing about the serious effect territorial pairs of eagles have already had on some of the west coast’s farms and crofts, Loch Lomond farmers had hoped it would have been a few more years before they would start to nest in their area.

“It will now be a case of watching and monitoring any effects the birds may have on sheep flocks and whether their numbers continue to grow.”

White-tailed eagles, also known as sea eagles, were hunted to extinction in the UK in the early 20th century, but efforts to reintroduce the iconic birds to the west coast of Scotland in the 1970s, and east coast in 2007, have been successful.

RSPB Scotland estimates there are now more than 150 breeding pairs in Scotland – a number that is predicted to rise to nearly 900 pairs by 2040.

But Scottish farmers say they have suffered enormously from predation, particularly of newborn lambs, despite a joint action plan with conservation bodies.

This has involved a number of non-lethal measures to try to deter white-tailed eagles from stealing lambs, including diversionary feeding, reflective helium balloons, lasers and having people walk around hillsides.

Some 13 white-tailed eagles have so far been released under a separate release programme on the Isle of Wight, out of a planned 60. The birds have already been seen in Herefordshire, Oxfordshire and even France. It was recently agreed to sanction further releases in Norfolk.

In particular, it wants to see a reduction in the white-tailed eagle population in areas where wild food sources can’t sustain their numbers without affecting domestic livestock.

Meanwhile, NatureScot, Loch Lomond and Trossachs National Park Authority and RSPB Scotland are working to ensure the new eagles on Loch Lomond are not disturbed.

Simon Jones, environment director for the National Park Authority, said: “We all have a responsibility to help keep these special birds safe.

“We are engaging with a range of stakeholders who may be affected by the birds’ arrival in the area, including loch users, visitors and local farmers.

“Protecting the natural environment and the wildlife here is a priority.”