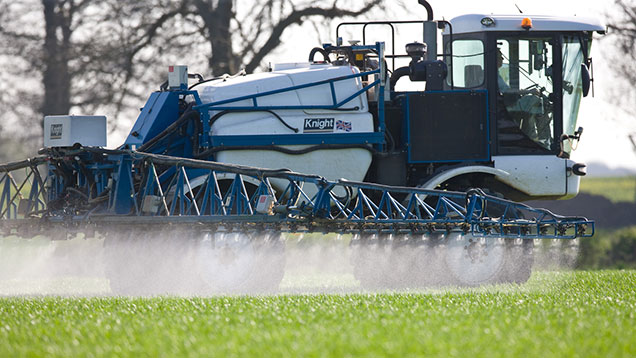 Pesticides must only be identified as endocrine disruptors following a sound scientific and full risk assessment, says the NFU.

The European Commission’s consultation to help define the criteria for endocrine-disrupting chemicals (EDCs) closed for responses on 19 January.

The consultation aims to help the commission define chemicals that might interfere with hormone systems, which may harm human health and the environment.

An independent report by farm consultant Andersons has warned up to 40 active substances are at risk of being lost.

“Without understanding the difference between risk and hazard properly, substances that pose little threat to human health or the environment such as salt and caffeine could be deemed to have endocrine disrupting properties and become needlessly banned.”
Henry Robinson, CLA president

This could result in a yield penalty of up to 50% depending on the crop, and farming income could take a £1.73bn hit, equivalent to a 36% fall in overall profits.

In its response to the consultation, the NFU set out five main arguments:

• Current regulation of EDCs is already too focused on hazard as demonstrated by the finding of the Andersons report, which demonstrates the scenario of product loss without any further restriction

• Failure to ensure a proportionate risk-based approach on EDCs will result in significant financial implications for members and will jeopardise farm businesses and undermine resistance management.

The NFU is keeping a “close eye” on the development of the EDC definitions review. If a more precautionary approach is taken, growers could lose up to one-quarter of active ingredients used in certified UK plant protection products, according to its vice-president Guy Smith.

He said: “This would significantly limit the ability of UK farmers to grow affordable, wholesome food. Such regulation plays straight into the hands of our competitors abroad who would take advantage of working in a more farmer-friendly regulatory regime.”

The CLA said it was necessary to identify the potential risk of pesticides and biocides by taking into account potency and exposure as well as hazard.
CLA president Henry Robinson said: “Without understanding the difference between risk and hazard properly, substances that pose little threat to human health or the environment such as salt and caffeine could be deemed to have endocrine disrupting properties and become needlessly banned.

“The potential loss of essential plant protection products could significantly reduce the ability of landowners and farmers to control pests, fungi and diseases without any additional benefits to the environment.”