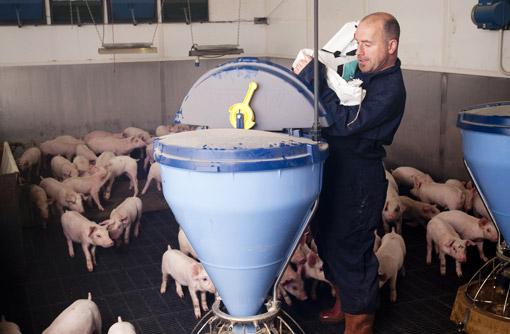 In the second instalment of livestock issues being discussed at EU level, Sarah Trickett looks at plans to introduce Processed Animal Protein into feed and cutting carbon emissions.

Processed Animal Protein (PAP) could be a name appearing on pig and poultry feed bags across the country in the future.

On a recent visit to the European Commission, Koen Van Dyck, director general for SANCO, explained the possibility of introducing PAP for non-ruminant animals. He said control tools to identify species specific protein were now available.

“We now have validated methods to test what species protein is from. These should be available from summer 2012.”

Although there is some reluctance from member states to support the current proposal, Dr Dyck said it would be up to each member state to authorise, but stressed it would not be allowed to affect trade. “Those member states taking the decision to ban PAP will not be able to ban imports from countries feeding PAP,” he said.

It is likely the ability to feed PAP will be rolled out in aqua feeds first, but the framework will be similar for pigs and poultry, said Dr Dyck.

“It will be at least a six-month time period before implementation. For aqua feed we are expecting an agreement by the summer and we hope to start feeding it by 2013. Feeding PAP could help reduce the imports of soya by 10%,” he added.

However, source and control is the main concern coming from member states and the feed industry. And Dr Dyck said channelling and dedicated plants would be necessary to avoid cross contamination both in slaughterhouses and feed mills.

Dr Dyck also expected there to be possible turbulence particularly with some ethnic groups where pig derived PAP could be fed to poultry. Although there are no plans to label meat products that have been fed PAP, animal feed delivered onto farms would be clearly labelled, he said.

Claims from the United Nations Food and Agriculture Organisation (FAO) that 18% of emissions come from the livestock sector may be significantly overestimated.

In reality, it is probably only half of this, according to Joao Silva, directorate general for agriculture and rural development at the Commission.

An EU study found the livestock sector represented just 9.1% of total emissions in the EU or 12.8% including land use.

The breakdown of average emissions from each species per kg/meat for the EU 27 is:


Mr Silva said there was high variability in emission levels between and within member states. “However, we are constrained and committed to an overall 20% target emission reduction by 2020. Nevertheless, if we do business as usual we will see a reduction in CO2 emissions in agriculture by 6.8%.”

In all policy scenarios, Mr Silva believed the largest emission decrease in agricultural activities was projected to take place in beef meat activities.

Mr Silva also warned that adopting different measures to try and reduce emissions could have additional and unwanted effects. “The reduction in one greenhouse gas could lead to a rise in another.

“Farming is also a biological system, and on one hand we need to produce more food for people, while at the same time complying with the need for biodiversity and reducing emissions, but the two may not go hand in hand,” he said.

The commission is also looking at how Australia uses a carbon farming initiative.

“In Australia farmers can offer carbon credits to others outside of agriculture. We will be looking at how we can incentivise reducing emissions in the EU in the future. It will be up to each member state on how they will reduce emissions.”